Dollar’s Best Streak Since 2012 Is Over, Showing Stress Easing - BLOOMBERG

Traders around the world dumped the dollar in favor of risk assets as moves by U.S. leaders to support the world’s largest economy spurred relief across markets hampered by liquidity strains.

The Bloomberg Dollar Spot Index declined 0.6%, ending a 10-day rally that took it to the strongest level on record after the Federal Reserve announced unprecedented stimulus. The index earlier fell as much as 1.5%, the most since 2016 on a closing basis. Treasuries fell and stocks around the world surged on signs U.S. leaders are close to reaching a consensus on a spending bill to boost the economy.

Norway’s krone led gains against the greenback, jumping the most on record before paring. Australia’s dollar extended a rebound from a multi-year trough and the pound rose as much as 2.2%, even after the U.K. entered a full lockdown to contain the coronavirus. An index of emerging-market currencies was on course for its biggest advance in more than three years, a positive development for borrowers with debt in the U.S. currency.

“Markets are going to start feeling the full tsunami of liquidity the Fed is providing now,” said Nathan Sheets, head of macroeconomic research at PGIM Fixed Income and former FOMC economist. “The liquidity they’ve provided from their first line of defense -- swap lines -- to other domestic measures are all about the Fed making it clear to markets that they will play the role as an international lender of last resort.” 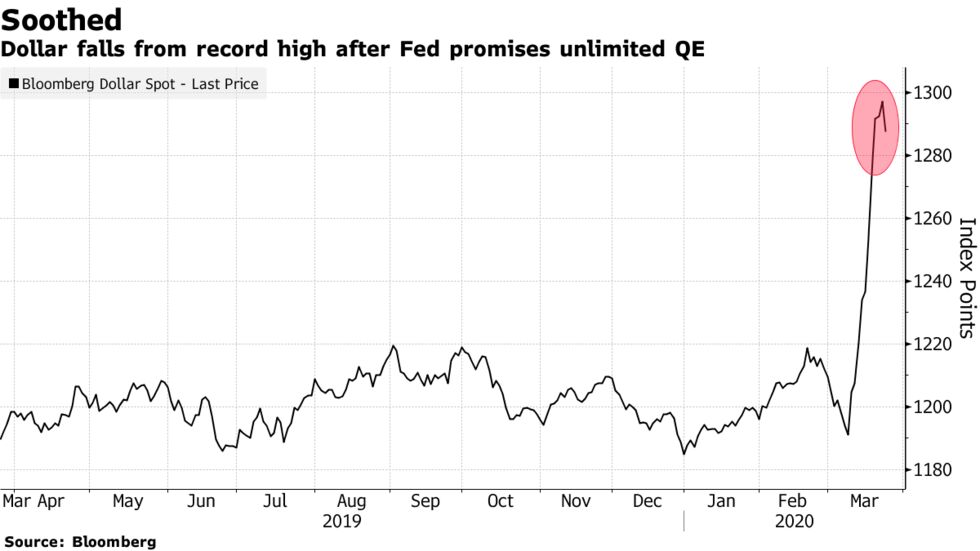 The relief sweeping over markets is in stark contrast to last week when investors sold almost everything but the dollar amid the growing fallout from the virus. A slew of emergency measures from major central banks including Japan and Australia failed to calm markets, with the worries centered on a liquidity crunch.

Those pressures now seem to be moderating. In the latest move on Monday, the Fed said it would buy an unlimitedamount of government bonds to keep borrowing costs low and expand its Money Market Mutual Fund Liquidity Facility. It had earlier extended its dollar-liquidity swaps to other policy makers including those in Australia and Brazil.

Still, strains in funding markets remain, and options traders aren’t convinced that the dollar’s retreat will mark a complete turnaround in sentiment. The premium to go long the dollar over the next month versus its major peers still trades near its highest in eight years. 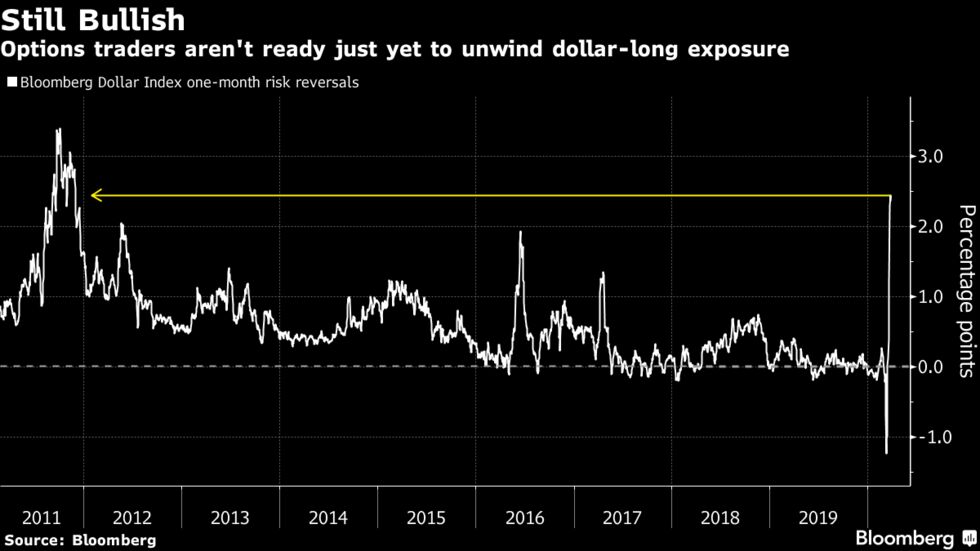 For Win Thin of Brown Brothers Harriman, the dollar is likely to recover as “virtually every major central bank is engaging in near unlimited quantitative easing with zero rates.”

The economic repercussions from the coronavirus crisis are piling up around the globe. Data Tuesday showed a U.S. gauge of activity at service providers and manufacturing contracted the most on record. A similar measure in the U.K. dropped to the lowest since the series began in 1998.

Weak economic data out of Europe and the U.S. are both likely to reignite haven appetite for the greenback, said Viraj Patel, foreign exchange and global macro strategist at Arkera Inc in London, who sees Tuesday’s drop as a technical correction rather than a fully-fledged sell-off.

Read More: Dollar Just Took a Hit But It’s Too Soon to Say Tide is Turning

As a result, the gains in risk and commodity currencies were small compared with their recent declines, with most still flirting with multi-year lows. The Australian dollar is still near the weakest since 2002.

While the pound gained after last week’s historically poor performance, few expect major gains are in store. Fears are still lingering about a hard Brexit at the end of the year, coupled with concerns about the U.K.’s support for self-employed workers thrown out of work by the lockdown.

Caution is particularly evident among developing Asian exchange rates. While Group-of-10 currencies rebounded strongly against the dollar, moves in emerging Asia were more restrained, led by South Korea’s won, which climbed about 1.4%.