British Pound Touches Highest Since May in Vote for Conservatives - BLOOMBERG

The pound touched the highest level against the euro in more than two-and-a-half years as traders stepped up bets for a Conservative victory in next week’s election. 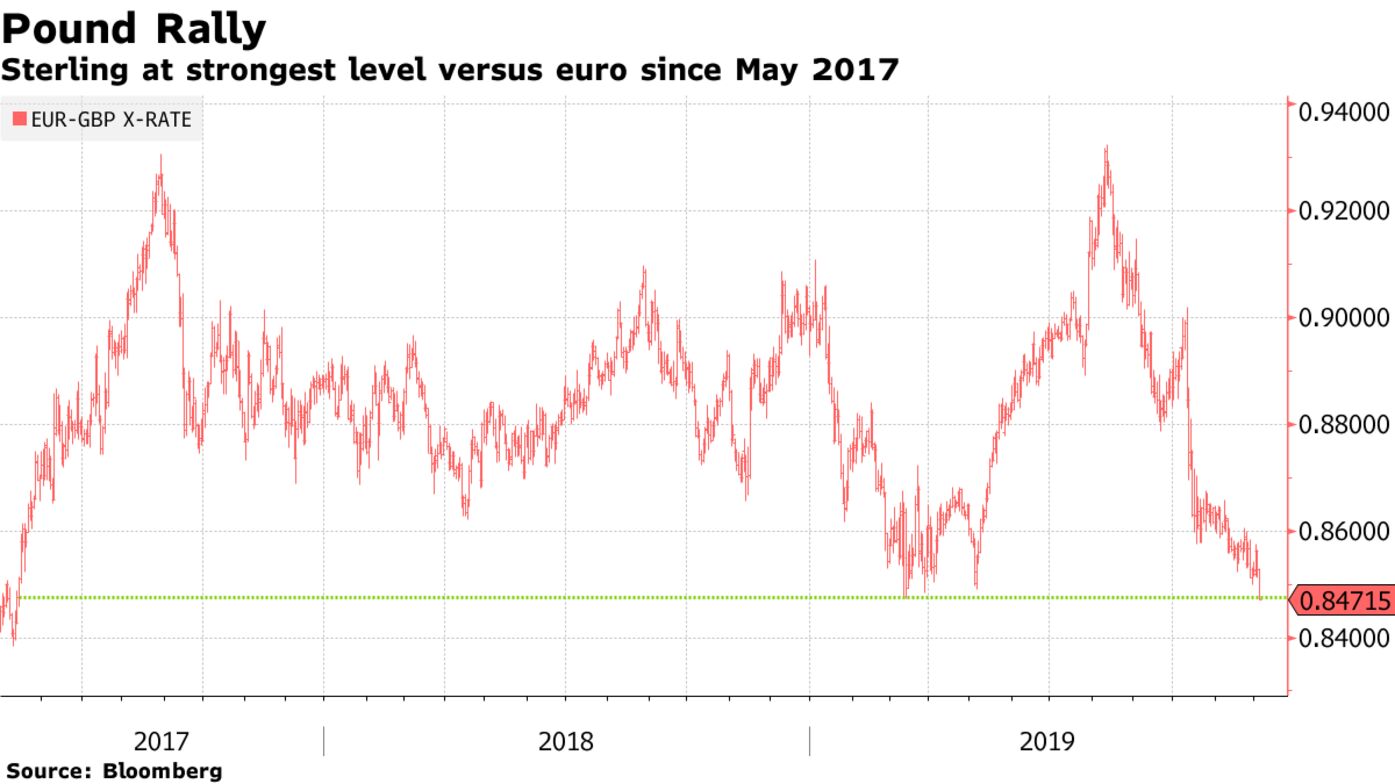 Investors see a Conservative majority on Dec. 12 as the most market-positive outcome, as it would allow Johnson to push his Brexit deal through Parliament in time for next month’s deadline and move on to the next phase of talks with the European Union. Trump’s visit had been seen as a risk for the Conservatives, who face questions over how the National Health Service would fare in any future trade deal with the U.S.

“With just over a week to go, sterling remains highly influenced by the polls day-to-day, but we may also be seeing some relief that Trump did not toss a grenade into the U.K. political system during his remarks,” said Ned Rumpeltin, European head of currency strategy at Toronto-Dominion Bank. “A break above the October high at $1.3013 may open the door for a test of $1.3185.”

Despite confidence in a Conservative win, some traders are protecting themselves against a fall in the pound over the next week on speculation it has rallied too far, too fast. One-week risk reversals on the pound-dollar, a barometer of sentiment and positioning, show investors are the most bearish on sterling since October. 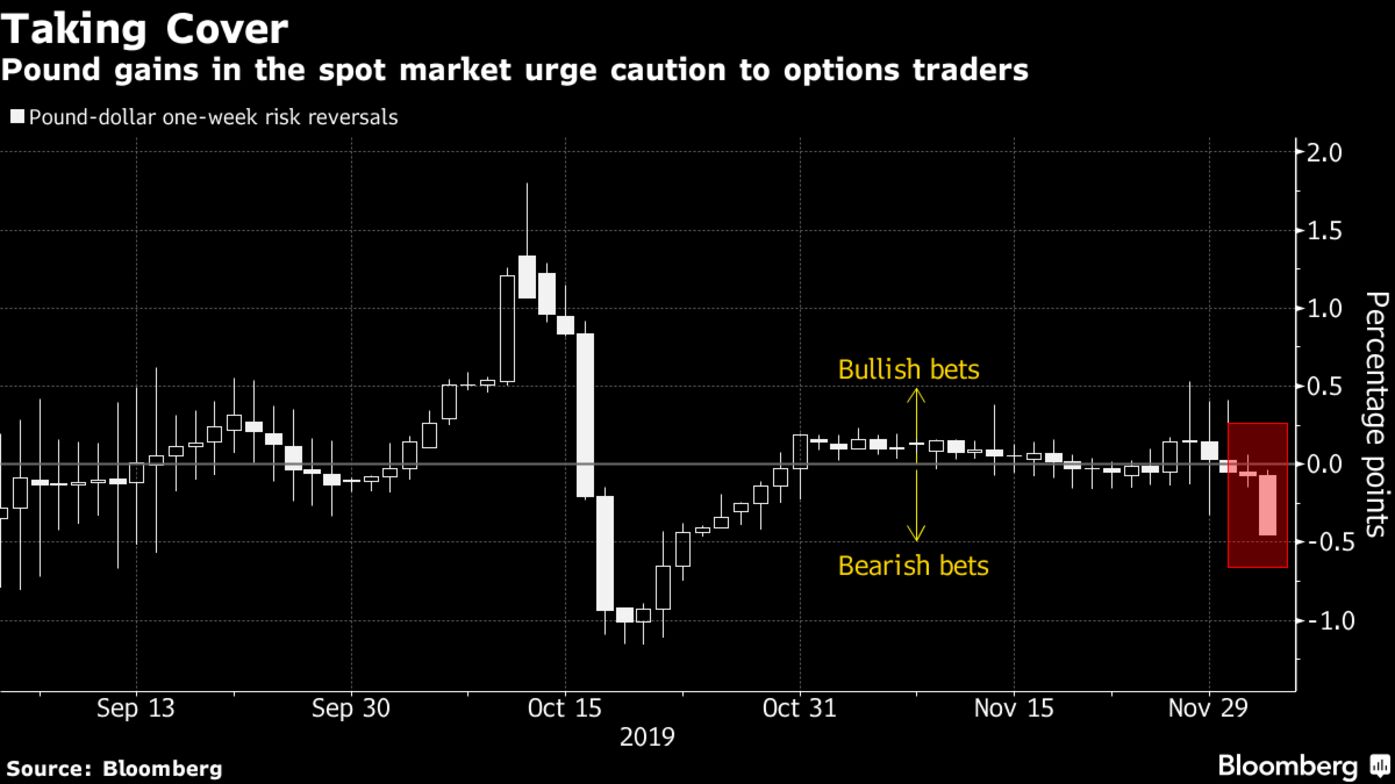 The pound gained as much as 0.9% to $1.3109, the highest since May 7. It rallied as much as 0.8% to 84.58 pence per euro, the strongest level since May 2017. The currency has acted as a barometer of political risk throughout the Brexit process and has recovered about 9% against the dollar since hitting an almost three-year low in September, on hopes of an end to the uncertainty.

Royal Bank of Canada sees a 60% chance of a Conservative majority next week, leading to the “near certainty” of Brexit at the end of January on the terms of Johnson’s deal. Under a Labour-led coalition, meanwhile, “almost all roads lead to a second referendum, to which we would apply a 60/40 probability of a vote to remain,” Adam Cole, chief currency strategist, said in a note. 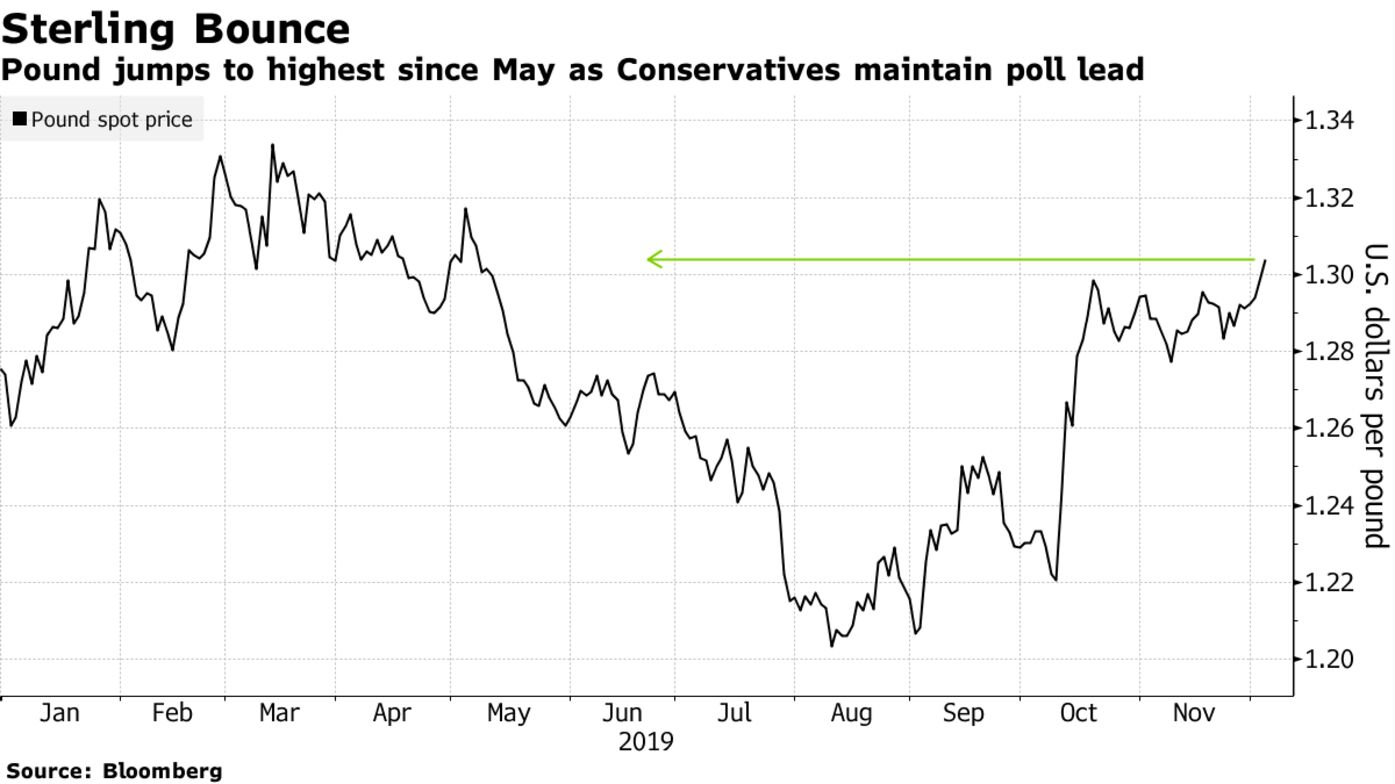 Pollsters say this election is a tough one with voters prone to switching parties as Brexit disrupts traditional allegiances. Surprise results in the Brexit vote and the last election also mean such surveys are seen as less reliable.

For Credit Suisse, a sizable majority for Johnson’s Conservatives is required to continue the currency’s rally. The currency looks vulnerable after the Dec. 12 vote unless the Conservatives win a “solid” majority of 40 seats or more, according to strategists including Shahab Jalinoos.

Data from the Bank of England last week showed foreign investors selling U.K. government bonds in October at the fastest pace since February. That month saw the U.K. prime minister secure a last-minute Brexit deal and extension to the deadline, before Parliament voted to back his bid for a December election. Gilts, which have acted as a haven from Brexit risk, slipped to send 10-year yields up four basis points to 0.71%.

— With assistance by Vassilis Karamanis