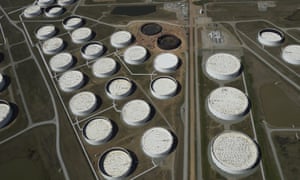 The world may soon run out of space to store its extra oil as Saudi Arabia prepares to increase its fossil fuel production even as global demand for energy continues to fall due to the Covid-19 pandemic.

Oil storage levels across the world’s storage facilities have climbed to about three-quarters full on average since the January shutdown of major refineries in China’s industrial heartlands to stem the outbreak of the coronavirus.

The oil industry is expected to keep filling oil storage with crude in the weeks and months ahead as the pandemic’s economic contagion spreads through the rest of the world, cutting demand for natural resources including oil.

Canada may be days away from running out of storage for its domestic oil production, according to analysts at energy consultancy Rystad Energy, and the rest of the world may follow suit in a few months.

The analysts expect that oil-rich regions in Western Canada will need to rein in production by about 400,000 barrels of oil a day by the end of the month.

“Compounding the situation is the near-certainty of a steep reduction in crude-by-rail exports this year,” said Thomas Liles, an analyst at Rystad, “As well as deferral of spring maintenance at several key oil sands mining projects.”

The global oil industry may increasingly look to offshore oil tankers to store their extra crude oil, but for this to be economic it would require oil prices to fall further.

The global oil price fell to lows of $25 a barrel a last week, from more than $65 at the start of the year, and remains below $30 a barrel. Rystad has warned the industry that the oil price may fall to $10 a barrel this year.

The hunt for affordable oil storage will be made more difficult after Saudi Arabia’s “vessel booking spree”, which has pushed freight rates “through the roof” in the past three weeks, the analysts said.

The world’s oversupply of oil is expected to balloon next month when an agreement between the Opec oil cartel and Russia to hold back oil production is due to end. The collapse of the deal allows Saudi Arabia, Opec’s de facto leader, to race Russia to increase oil production in a bid to grab a greater share of the market.

Analysts at Rystad estimate that the world has about 7.2bn barrels of crude and products in storage, including 1.3bn to 1.4bn barrels onboard oil tankers at sea.

In theory, it would take nine months to fill the world’s remaining oil stores, but constraints at many facilities will shorten this window to only a few months.

“At the current storage filling rate, prices are destined to follow the same fate as they did in 1998, when Brent fell to an all-time low of less than $10 per barrel,” said Rystad Energy analyst Paola Rodriguez-Masiu