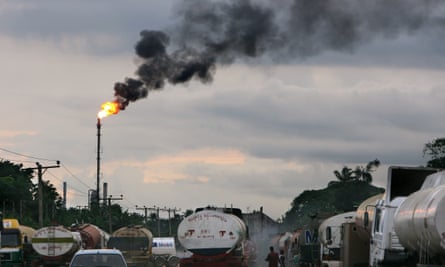 Global development is supported by

Black market fuel made from stolen oil in rudimentary “bush” refineries hidden deep in the creeks and swamps of the Niger delta is less polluting than the highly toxic diesel and petrol that Europe exports to Nigeria, new laboratory analysis has found.

Shell, Exxon, Chevron and other major oil companies extract and export up to 2m barrels a day of high quality, low sulphur “Bonny Light” crude from the Niger delta. But very little of this oil is refined in the country because its four state-owned refineries are dysfunctional or have closed.

Instead, international dealers export to Nigeria around 900,000 tonnes a year of low-grade, “dirty” fuel, made in Dutch, Belgian and other European refineries, and hundreds of small-scale artisanal refineries produce large quantities of illegal fuel from oil stolen from the network of oil pipelines that criss-cross the Niger delta.

The net result, says international resource watchdog group Stakeholder Democracy Network (SDN) in a new report, is that Nigeria has some of the worst air pollution in the world, with dense clouds of choking soot hanging over gridlocked cities leading to a rise in serious health conditions as well as damaged vehicles. 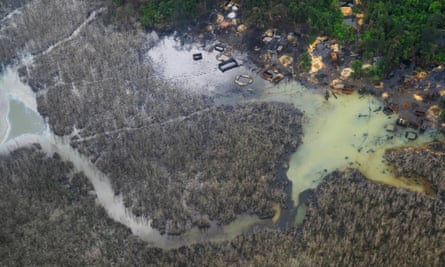 Illegal refineries and pollution among the waterways in Rivers State, Nigeria. Photograph: Staff/Reuters

The extreme toxicity of the “official” fuel exported from Europe surprised researchers who took samples of diesel sold in government-licensed filling stations in Port Harcourt and Lagos. They found that on average the fuel exceeded EU pollution limits by as much as 204 times, and by 43 times the level for gasoline.

Laboratory analysis also showed that the black market fuel was highly polluting but of a higher quality than the imported diesel and gasoline. The average “unofficial” diesel tested exceeded the level of EU sulphur standards 152 times, and 40 times the level for gasoline.

“Our research suggests that Nigeria is having dirty fuel dumped on it that cannot be sold to other countries with higher and better implemented standards. The situation is so bad that the average diesels sampled are of an even lower quality that that produced by artisanal refining camps in the creeks of the Niger delta,” said Florence Kayemba, SDN programme manager.

With more than 11m, mostly old, cars imported from Europe and Japan on the roads, and hundreds of thousands of inefficient generators used by households and businesses for electricity, Nigeria ranks fourth in the world for deaths caused by air pollution. It has been estimated that 114,000 people die prematurely from air pollution each year.

The air quality in cities like Port Harcourt, Aba, Onitsha and Kaduna has reached crisis levels of pollution in recent years, and there is mounting evidence of rising asthma, lung, heart and respiratory diseases. 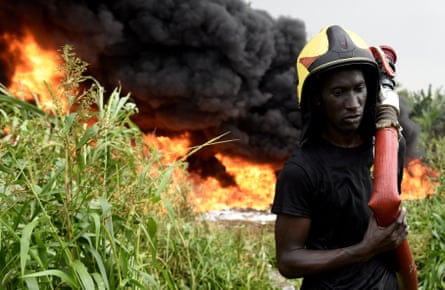 A firefighter works to put out the fire from a ruptured oil pipeline near Lagos. Photograph: Pius Utomi Ekpei/AFP

More than half of developing countries, mainly in Africa and Latin America, still use high-sulphur fuels which have long been illegal to burn in western countries. In Nigeria the practice is encouraged by an opaque fuel subsidy system that keeps prices relatively low at the pumps, but is widely thought to fuel corruption. Refineries in Europe are allowed to make the fuel if countries agree to accept it.

The SDN report, part-funded by the UK Foreign Office’s anti-corruption conflict, stability and security fund, calculates that around half the air pollution in Port Harcourt, a city of more than 3 million people, comes from the burning of official and unofficial fuel. The rest comes from nearby gas flaring, other industries, and the burning of rubbish. 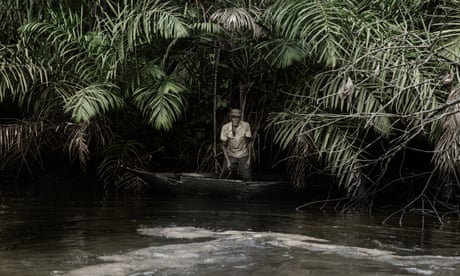 'This place used to be green': the brutal impact of oil in the Niger Delta

Levels of particulate matter in Port Harcourt and Lagos, says SDN, are 20% worse than Delhi in India, the most polluted capital city in the world, where emergency levels of photochemical smogs are common. In 2016, the River Niger port city of Onitsha was said by the World Health Organization to be the world’s most polluted city, the concentration of PM10s – soot particles – was recorded at 594 micrograms per cubic metre; compared with the WHO safe limit of 66.

“The Niger delta already suffers environmental, health and livelihood impacts from decades of oil spill pollution, gas flaring and artisanal refining. This research indicates that it not only experiences the repercussions of producing crude oil, but also in the consumption of dirty official and unofficial fuels,” said the report.

According to industry sources which track legal and illegal oil cargo movements – who asked to remain anonymous – around 80% of Nigeria’s petroleum products come from the Netherlands and Belgium. The two countries have some of Europe’s largest refineries.

“This is even more concerning at a time when Nigeria is facing an outbreak of coronavirus. High levels of pollution and pre-existing respiratory and other health conditions may increase the risk that Covid-19 poses to the health of the population,” said Matthew Halstead of Noctis, which conducted the laboratory research.

The SDN report substantiates allegations made in a 2016 Public Eye investigation and a Dutch government report in 2018, that European refineries and commodity brokers were blending crude oil with benzene and other carcinogenic chemicals to create fuels hundreds of times over European pollution limits for the weakly-regulated African market. This was said to be causing significant particulate pollution, damage to vehicles, and adverse health impacts for local populations.

Nigeria, along with Togo, Ghana, Ivory Coast and Benin promised in 2017 to stop the imports of “Africa quality” oil products as part of a UN environment programme initiative. But while Ghana has acted, reducing sulphur from 3,000 to 50 parts per million, Nigeria has argued that it needs more time to adapt. 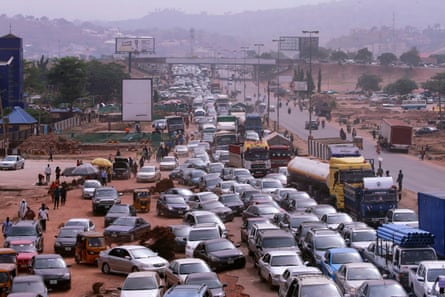 Traffic as people attempt to rush out of Abuja, Nigeria. Photograph: Afolabi Sotunde/Reuters

However, the recent collapse in oil prices because of Covid-19 means that imported fuel no longer needs to be subsidised and should no longer be a barrier to Nigeria adopting higher standards.

Illegal artisanal refineries are said by SDN to be growing fast in number and scale, now producing 5-20% of all the gasoline and diesel consumed in Nigeria from the estimated 175,000 barrels of crude oil stolen each year.

The bush refineries are highly dangerous and frequently explode, adding to air, water and soil pollution in the mangrove swamps. But they are an important source of income for communities.

According to SDG, if Nigeria insisted on diesel imports that complied to the country’s intended fuel sulphur standards, particulate emissions could be reduced by 500%, greatly improving pollution and reducing health costs. It recommends that Nigeria enforces its proposed sulphur standards as soon as possible and considers engaging with artisanal oil refiners in future.