Pound Outlook Gets Brighter From Here in Most Election Scenarios - BLOOMBERG

By Charlotte Ryan and Anooja Debnath

The pound is unlikely to drop much further whatever the outcome of next month’s U.K. election.

The currency could climb nearly 5% to $1.34 after the Dec. 12 vote if the ruling Conservatives win, according to a Bloomberg survey of 12 strategists and investors. That is seen as their base case with a 40% probability. The next most likely scenario, of a coalition government led by Labour, would only send the pound down less than 1% in the short term, and could ultimately result in a second Brexit referendum that would spur a renewed rally. 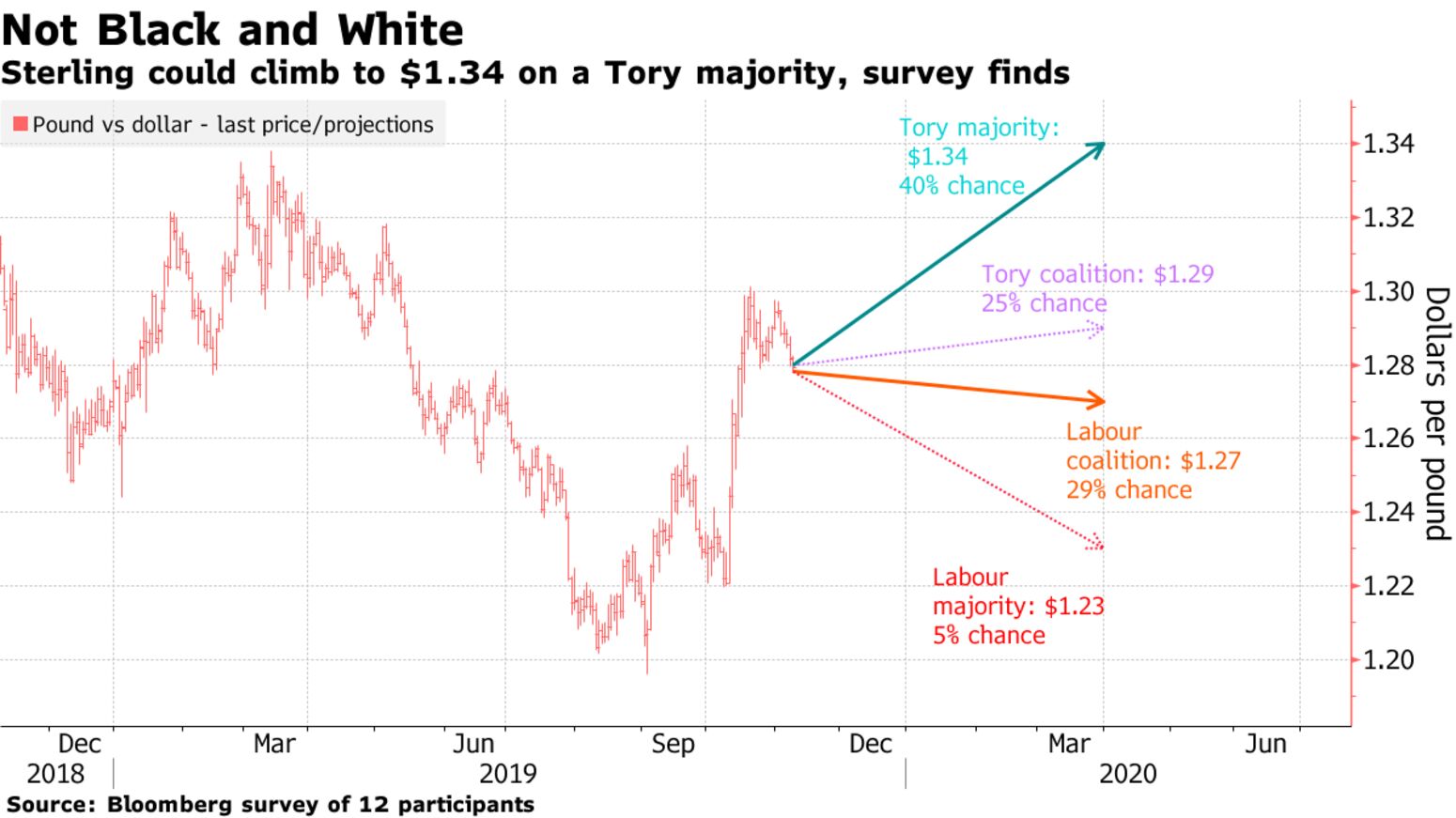 The U.K. currency has staged a rebound to around $1.28 since hitting a near three-year low below $1.20 in September, largely on the back of Prime Minister Boris Johnson finally managing to secure a Brexit deal. It has lost some ground since Johnson called the election to try to gain a majority to push the agreement through a divided Parliament. The pound extended its losses late Friday after Moody’s Investors Service placed the U.K.’s sovereign credit rating on negative outlook, saying the country’s ability to set policy and commit to fiscal discipline has weakened in the Brexit era.

“The much diminished risk of no-deal exit under a returned Conservative government means the pound probably trades in line with its traditional Conservative good/Labour bad paradigm,” said Adam Cole, head of currency strategy at Royal Bank of Canada. “But the clear risk of no Brexit under a Labour coalition government muddies the waters considerably.”

The latest opinion polls show a Conservative win as the most likely outcome, though with five weeks to go investors are braced for any signs of a recovery for Labour or smaller parties that could increase the chances of no-one winning an overall majority.

The only clearly negative outcome for the pound is one to which the respondents attached a very low probability: an outright win for Labour. The participants see just a 5% chance that the party’s left-wing leader Jeremy Corbyn manages to secure a majority. They think this would cause sterling to drop 4% to $1.23, given plans to ramp up spending, nationalize utilities and hike taxes for the rich could open up the risk of capital flight by investors.

Bloomberg asked survey participants to assign a probability and a pound level to the following four scenarios: a Conservative majority, a Conservative coalition, a Labour coalition and a Labour majority. For some, the outcomes aren’t cut and dry given the numerous factors to consider.

A “black-and-white” approach on the winner is tricky given this election may end up being historic for the amount of “greys, blues and pinks,” said Stephen Gallo, the European head of currency strategy at the Bank of Montreal. “Even if there is a left or right coalition in the offing, who can say how long it will take to form?”

The scenario where Labour comes into power with the backing of smaller parties is not necessarily bearish for the pound since the others in the coalition would be likely to moderate its socialist agenda, strategists said. It would also open up the possibility of a closer future relationship with the EU.

“The Corbyn in No. 10 outcome is a nuanced one,” said Ned Rumpeltin, the European head of currency strategy at Toronto-Dominion Bank. “The more watered down his influence is, the better it would be for sterling. The FX market’s knee-jerk reaction to the headline drop aside, a situation where a Labour majority was highly dependent on the support of other parties means a much softer Brexit.”

Even as these outcomes point to the potential for a pound recovery, it’s hard to find anyone willing to stick their neck out and buy the currency at this point. Sterling has slipped in the past week and options markets show traders are still positioning for losses into the vote.

Investors will be wary of putting too much stock in opinion polls, given their failure to foresee the Brexit result and the 2017 election outcome. This vote also looks harder to predict than most, with people’s allegiances to parties weaker as views on Brexit don’t break down along traditional political lines.

“Five weeks is a long time in politics,” said Marc Ostwald, a global strategist at ADM Investor Services. “Eventually markets will wake up to the fact that even with a Withdrawal Agreement Bill passed, there are years of uncertainty related to what trade deals will be put in place, but markets love a knee-jerk reaction. Shoot first, ask questions later.”