By Liz McCormick and Saleha Mohsin 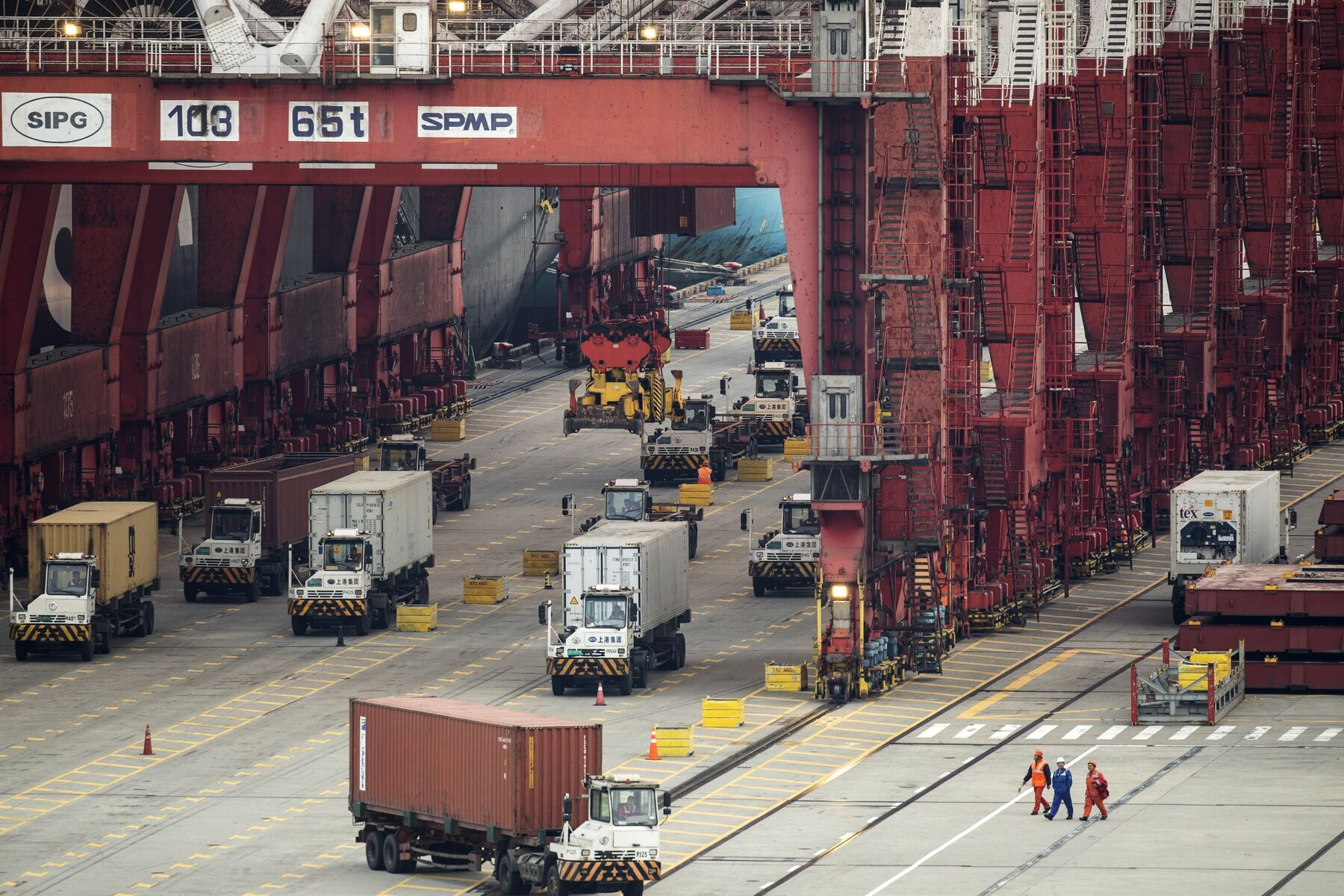 Vehicles travel under gantry cranes at the Yangshan Deepwater Port in Shanghai, China.

The idea that China would dump its $1.1 trillion of Treasuries to retaliate against U.S. tariffs is often dismissed as improbable. It’s seen as a nuclear option that would inflict more harm on China’s economy than America’s.

Yet the tensions rippling through global financial markets could still lead Beijing to reduce its stockpile in the $15.9 trillion Treasuries market -- not to retaliate, but to defend its currency if it goes into a free-fall. The offshore yuan has slumped 2.4% this month as the trade standoff intensified, reaching the weakest since December. It was little changed at 6.9053 per dollar as of 10:17 a.m. in Hong Kong.

The specter of Treasuries being deployed as a weapon in the trade spat surfaced via a tweet from a Chinese journalist on Monday that said the nation’s scholars are “discussing the possibility of dumping” U.S. government debt. The post came after trade negotiations last week ended without a resolution. Beijing on Monday said it will increase levies on some American goods in retaliation for the latest U.S. tariff hikes. 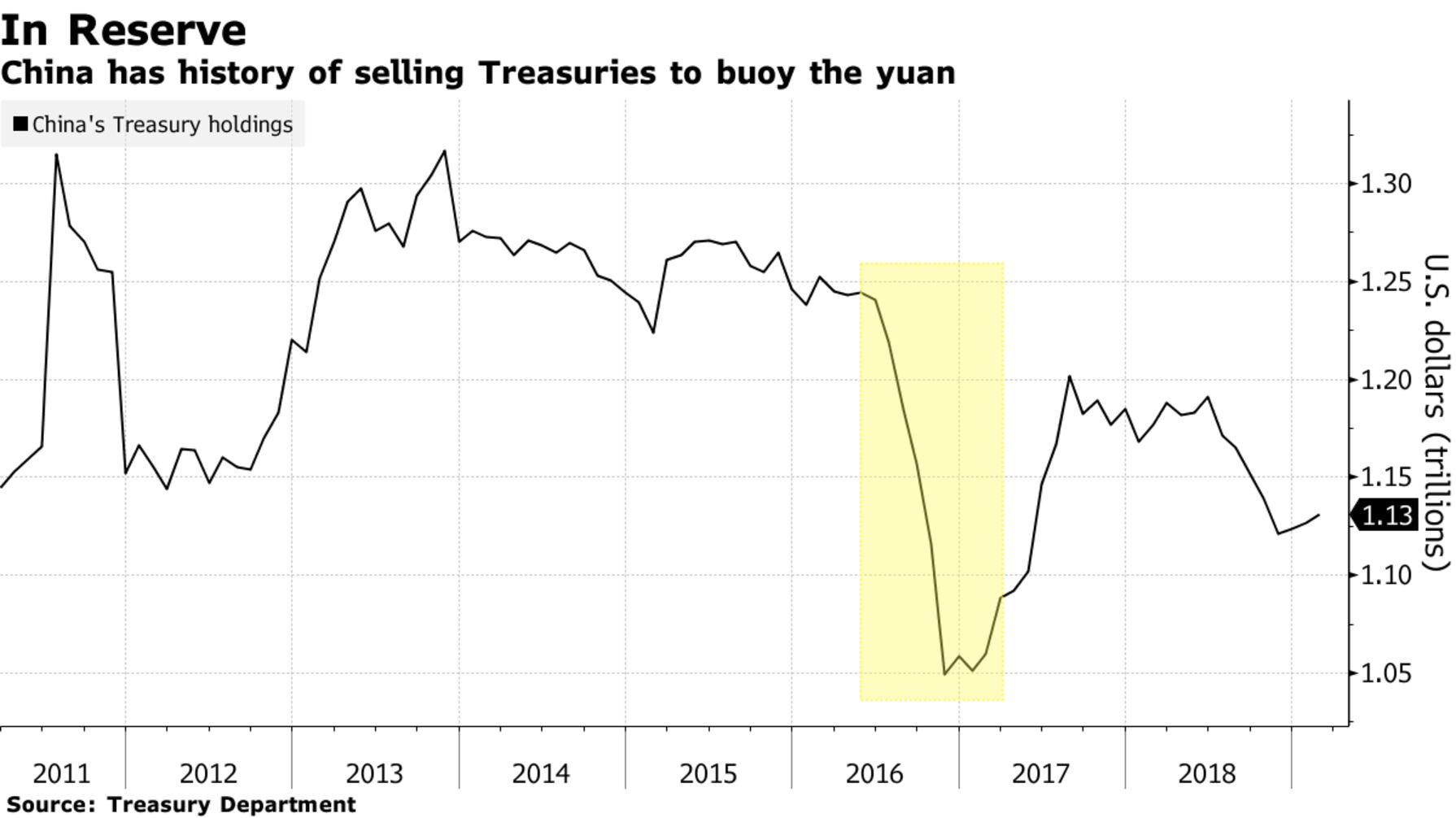 “China selling Treasuries is a risk, but it would have less to do with any retaliation they might pursue in response to tariffs and more to do with managing their currency,” said Gene Tannuzzo, deputy global head of fixed income at Columbia Threadneedle Investments. “But if the capital account is leakier than they want it to be and they have to defend the yuan, then they’d need to be selling Treasuries.’’

Macquarie Securities Ltd. says China is unlikely to let the yuan’s slide get out of control, as it could lead to capital outflows and sharper depreciation. In 2016, Chinese authorities unloaded about $188 billion of Treasuries -- 15% of the total -- as the yuan sank almost 7% amid capital flight.

Why China’s U.S. Treasuries Are a Double-Edged Sword: QuickTake

Tannuzzo sees an additional 7% decline in the yuan as likely without a trade deal, for a combined slide in line with that seen in the second and third quarter of 2018, when a previous bout of trade angst roiled markets. Last year, China’s Treasuries holdings fell by about 5%, second in scale only to the 2016 reduction. 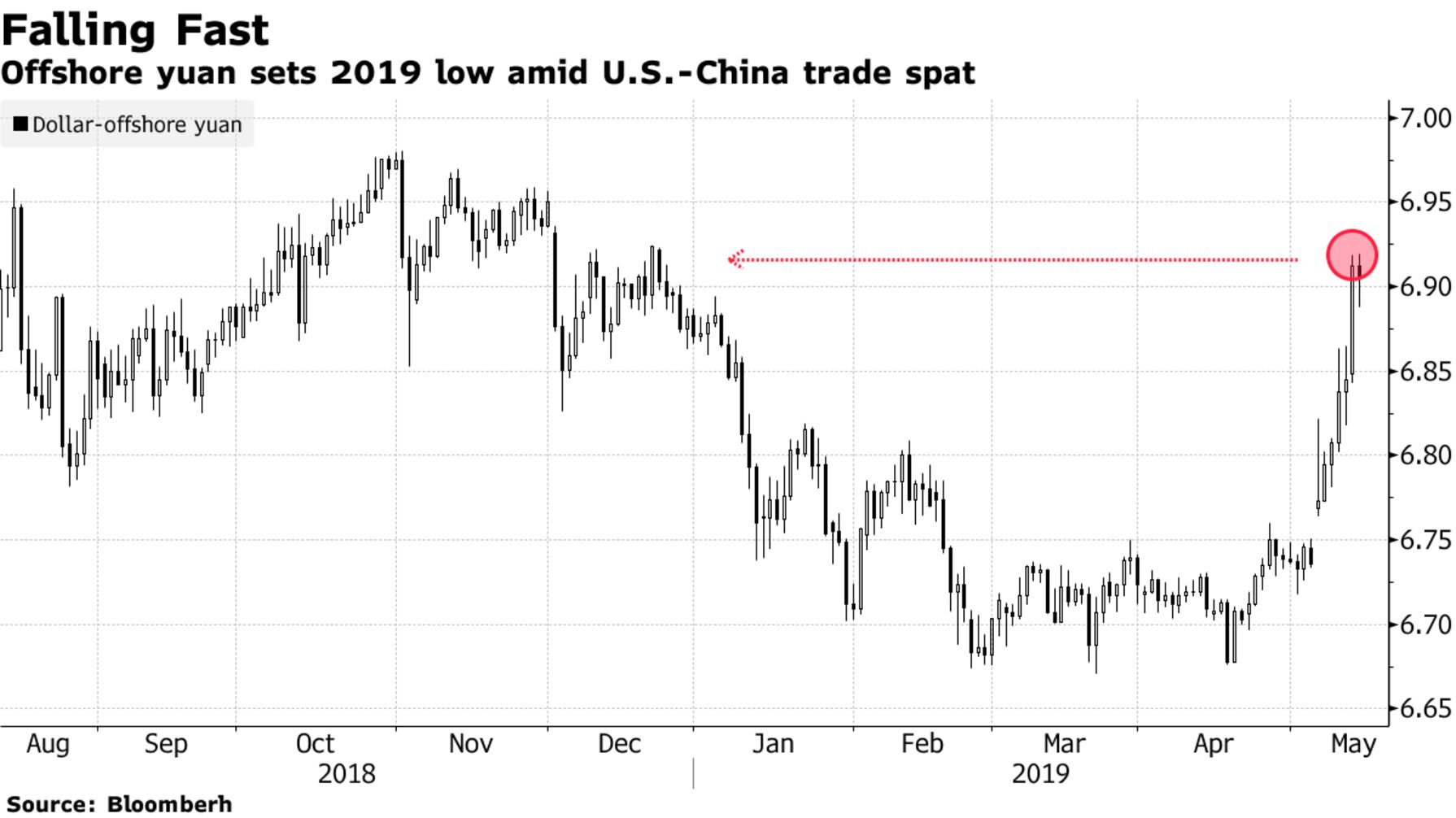 China’s Treasuries holdings are still more than double where they stood before the U.S. recession and comprise about a third of the country’s $3.1 trillion in foreign-exchange reserves. It taps those coffers to manage its currency.

The Chinese journalist’s tweet on Monday barely registered in the bond market, as it came amid haven buying as stocks slumped in the face of the trade impasse. The benchmark 10-year Treasury yields 2.41%, compared with 2.68% at the end of December.

U.S. officials have warned China against deliberately weakening the yuan to combat the hit from U.S. duties. But most strategists say China’s painful experience with devaluing the yuan in 2015, which prompted an exodus of capital, is likely to dissuade such a move.

Sebastien Galy, senior macro strategist at Nordea Investment Funds, also sees the risk that China will trim its Treasuries pile if it needs to prop up the yuan to prevent repercussions for its economy.

“If there is no trade deal, China’s currency will come under further pressure and that’s a problem for their funding, so they will need hard currency to intervene to prevent the weakening,” he said.

But the consensus is that any further selloff would be a last resort. For one thing, China would struggle to find other places to park its cash. But it would also have to consider the consequences for its own economy, if a stronger yuan undermines exports.

Even if China did dump Treasuries, yields might not rise that far. Any such move would probably trigger risk aversion that drives other investors to snap them up as a haven. What’s more, the Federal Reserve is about to start adding to its Treasuries again, providing a buffer to the marketplace.

“Whenever tensions emerge between the U.S. and China, questions arise as to whether China would sell off its Treasuries in retaliation,” said Mark Sobel, a former Treasury official and now U.S. chairman for the Official Monetary and Financial Institutions Forum. “This has been the dog that didn’t bark.”