Africa’s most populous country and biggest oil producer has been convulsed by protests that started with anger over police brutality and have now broadened, drawing worldwide attention. 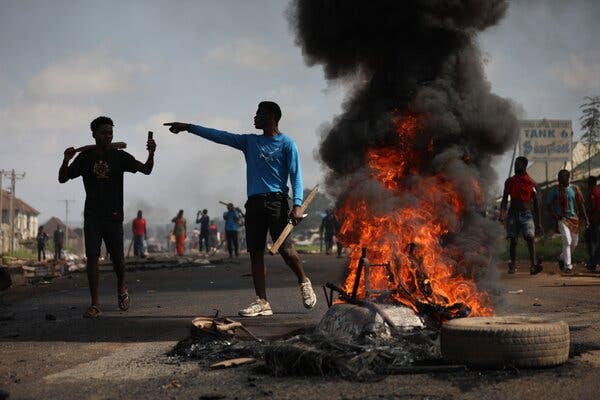 By Rick Gladstone and Megan Specia

Tens of thousands of Nigerians have been demonstrating for weeks against a notoriously brutal and corrupt police agency, the Special Anti-Robbery Squad — a show of popular anger, fueled by longstanding grievances over corruption and lack of accountability, that posed the biggest challenge to the government in years.

The demonstrations turned deadly for the first time this week, as soldiers fired on protesters.

Here are the basics of what is behind the protests and what they could mean for Nigeria, which at 206 million people is Africa’s most populous nation, its largest oil producer and an epicenter of the continent’s economic, political and cultural trends.

What is SARS?
Commonly known as SARS, the Special Anti-Robbery Squad was created in 1984 in response to an epidemic of violent crime including robberies, carjackings and kidnappings. While it was credited with having reduced brazen lawlessness in its initial years, the police unit was later accused of evolving into the same problem it had been designed to stop: a criminal enterprise that acts with impunity.

In June, Amnesty International issued a report that it said had documented at least 82 cases of torture, ill-treatment and extrajudicial executions by SARS officers between January 2017 and May 2020. The victims, Amnesty said, were predominantly men aged 18 to 25, from low-income backgrounds and vulnerable groups. The Nigerian government’s failure to address this problem, Amnesty said, showed “an absolute disregard for international human rights laws and standards.”

The critics include Fulani Kwajafa, the former police commissioner who founded SARS. In an interview with the BBC, he disavowed what it had become, saying the unit had been “turned into banditry.”

Why did anti-SARS demonstrations erupt in recent weeks?
The catalyst seemed to be an Oct. 3 video that appeared to show the unprovoked killing of a man by black-clad SARS officers in Ughelli, a town in southern Delta state. Nigerian officials said the video, which was widely shared over social media, was fake and arrested the person who took it — inciting even more anger.

Thanks for reading The Times.
Subscribe to The Times

Demonstrations erupted in Lagos, the nation’s biggest city, and elsewhere around the country, driven by calls from people — many of them young — demanding that the government dismantle SARS.

The decentralized movement has coalesced on social media, where people are using the hashtag #EndSARS and sharing images of police brutality. The hashtag has spread internationally, with prominent actors and sports figures from across Africa to Europe and the United States sharing the posts.

Has the government done anything to address the anger over SARS?
President Muhammadu Buhari, seeing that the protests were serious and spreading, agreed on Oct. 12 to disband SARS, calling his decision “only the first step in our commitment to extensive police reform in order to ensure that the primary duty of the police and other law enforcement agencies remains the protection of lives and livelihood of our people.”

But the response did not mollify protesters — especially after Mr. Buhari’s subordinates said SARS officers would be redeployed elsewhere in Nigeria’s police system. People who have been demanding that officers be fired and that the most brutal among them be prosecuted say that the government’s is an attempt to paper over a problem, not to fix it.

And in recent days, clashes between protesters and the police have grown increasingly violent.

What other issues are fueling the protests?
The anger of the protesters seems to have only increased — especially after the deadly suppression of a peaceful demonstration in Lagos on Tuesday, compounded by a 24-hour curfew decree and the deployment of Nigeria’s military forces to quell further demonstrations.

The powerful role in the protests played by young Nigerians and their use of social media to share grievances could turn the movement into a much broader challenge for the government. Half the country’s population is under the age of 19.

Their movement bears striking similarities to demonstrations in the United States this year amid the outcry over police brutality after the killing of George Floyd in Minneapolis.

But police brutality isn’t the only issue fueling the anti-government sentiment. Nigeria’s stagnant economy, which relies heavily on oil exports that were crippled by the coronavirus pandemic, has become a major issue.