World Bank says remittance estimates from Ireland to Nigeria are not reliable - JOURNAL.IE

There is an “urgent need” to improve such data collection, the organisation said.

THE WORLD BANK has said international remittance estimates are not reliable and that there is an “urgent need” to improve such data collection.

The topic of personal remittances being sent from people living in Ireland to other countries, in particular Nigeria, has been in the news in recent days.

On Tuesday, independent TD Noel Grealish stated that in the past eight years “over €10 billion has left this country by way of personal transfers”.

He singled out Nigeria in particular, saying €3.54 billion was transferred from Ireland to there in the last eight years, describing this figure as “astronomical”.

Yesterday TheJournal.ie gathered the relevant annual remittance estimates and examined how they were collated, and found the €3.54 billion claim to be incorrect.

Figures from the Central Statistics Office, which are more reliable, put the amount of personal remittances being sent from Ireland to Nigeria at about €17 million per year or €136 million over eight years.

The numbers Grealish quoted were from estimates gathered by Knomad, the Global Knowledge Partnership on Migration and Development, on behalf of the World Bank.

When asked how the estimates are gathered, a spokesperson for Knomad told TheJournal.ie: “Bilateral flows of remittances from Ireland to Nigeria and other countries, which are a key data requirement for international remittance service providers, are not readily available from official sources.”

Due to the lack of readily available figures, Knomad estimates bilateral remittance flows by allocating remittance receipts reported by Nigeria (and other countries) to various source countries in proportion to the following:

According to this methodology, bilateral remittance flow from Ireland to Nigeria in 2018 was estimated to be US $539 million (about €490 million), or 2.2% of Nigeria’s total remittance receipts of $24.4 billion (€22.2 billion).

The spokesperson said this methodology “implies several caveats to the resulting estimates of bilateral flows between Ireland and Nigeria”.

For example, Nigeria’s total remittance receipts may not be accurate, due to under-recording of flows through unofficial channels.

“It is possible that some of the remittances from Ireland to Nigeria may be attributed to other countries (for example, the United States or the United Kingdom that house the headquarters of many correspondent banks),” they said.

The spokesperson noted that the number of Nigerian people living in Ireland “may not have been accurately measured taking into account documentation status” such as naturalisation, expiry of visa, irregular status arising out of recent movements of people including refugees, transit migrants, retirees and other return migrants.

According to the 2016 Census, there were 13,079 Nigerian people living in Ireland at that time: 6,995 Irish-Nigerians and 6,084 Nigerians. This figure may be an underestimation but it is the most recent number available.

The Knomad spokesperson noted that a larger share of remittances may be attributed to Ireland if other host countries for Nigerian people “do not report or under-report migration stock data”.

Second- and third-generation Nigerians living abroad may also send remittances, which may not show up in official data.

Despites these issues, the spokesperson said “until central banks publish data on remittances by source and destination, estimation using this kind of methodology is the only option”.

“This methodology is perhaps the only way to get around the measurement difficulties associated with attributing sources to headquarters of correspondent banks.

There is an urgent need to improve data collection on both migration and remittance flows, not only in low- and middle-income countries, but also in high-income countries.

“With remittance flows on track to overtake foreign direct investment flows, the urgency has only increased.”

At odds with CSO figures

Last month, Grealish (via a parliamentary question) asked for “the amount sent out of Ireland in personal remittances in each of the past 10 years; and the countries to which they were sent each year”.

In the reply delivered to Grealish by junior minister Seán Kyne on 22 October, it was noted that personal remittances sent to Nigeria from Ireland were €17 million each year from 2010-2017, and €16 million in 2009. Over the past eight years, that amounts to €136 million.

These figures were collated by the Central Statistics Office, estimated using Revenue data.

The most recent year for which we have both World Bank and CSO figures is 2017. According to the World Bank estimate, about €430 million was sent from Ireland to Nigeria that year. This figures drops to €17 million according to the CSO – about 4% of €430 million, and €1,300 per Nigerian living in Ireland (as per the latest Census). 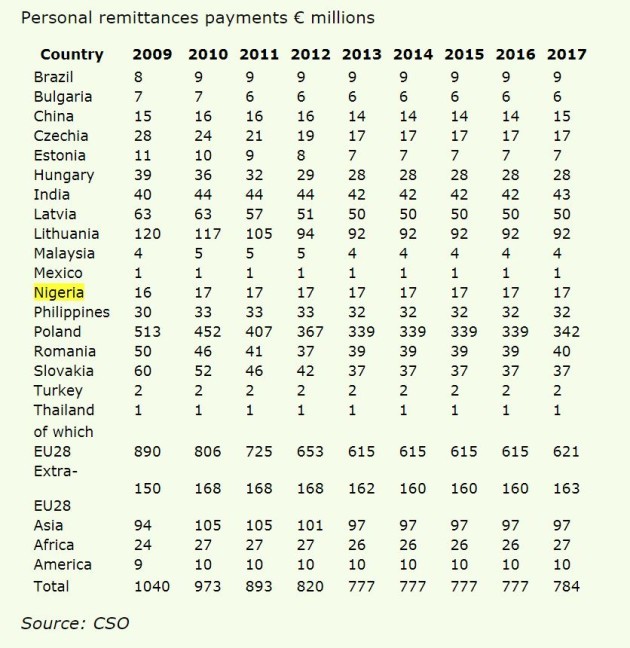 When asked by TheJournal.ie how it gathered these figures, a spokesperson said the CSO “estimates worker remittances paid from Ireland as a small component of the current account of the balance of payments”,  adding: “These are all transfers from Irish resident households to non-resident households.”

The spokesperson said remittance information is difficult to compile for national statistics offices and is “usually based on administrative sources and modelling rather than direct collection”.

“Pay of non-national workers is used to estimate disposable income and to derive a remittance amount. The approach using indirect data sources is recognised as a standard approach in the IMF Guide for Compilers and Users of International Transactions in Remittances…

The balance of payments is a complex accounting system which summarises economic transactions between Ireland and the rest of the world in a specific time period. The compilation of the balance of payments is based primarily on enterprise surveys. The framework includes also actual data and estimates of resident to non-residents of household, government and non-profit institutions.

The spokesperson added that the CSO is “currently investigating new approaches to deriving remittance information”.

Attempts by TheJournal.ie to contact Grealish have been unsuccessful to date. We sought to clarify why he used the World Bank figures rather than the CSO statistics that were recently sent to him.