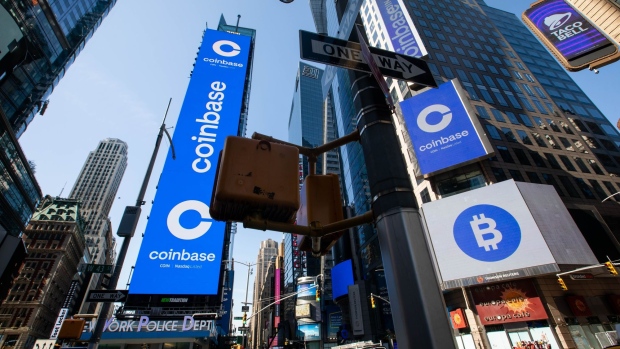 Monitors display Coinbase signage during the company's initial public offering (IPO) at the Nasdaq MarketSite in New York, U.S., on Wednesday, April 14, 2021. Coinbase Global Inc., the largest U.S. cryptocurrency exchange, is set to debut on Wednesday through a direct listing, an alternative to a traditional initial public offering that has only been deployed a handful of times. Photographer: Michael Nagle/Bloomberg , Bloomberg

In a Twitter thread, CEO Brian Armstrong said the SEC would be creating an unfair market if it tries to shut down its new lending product, which would allow consumers to earn interest on their crypto holdings. Coinbase, the U.S.’s biggest cryptocurrency exchange, disclosed in a blog post that the SEC issued a Wells notice and opened a formal investigation.

“We’re being threatened with legal action before a single bit of actual guidance has been given to the industry,” Armstrong wrote on Twitter. “Regulation by litigation should be the last resort for the SEC, not the first.”

The issue centers on Coinbase’s product called Lend, which the company has marketed as a high-yield alternative to traditional savings accounts that could earn an annual yield of 4%. The product hasn’t been launched yet, but Coinbase encouraged customers in June to sign up for pre-enrollment.

The question of whether DeFi lending pools qualify as securities is shaping up as a key legal battleground for the SEC. Part of it turns on whether such set-ups meet the definition of “investment contracts” as established in the Supreme Court’s 1946 Howey decision, which defined such contracts as “the investment of money in a common enterprise with a reasonable expectation of profits to be derived from the efforts of others.”

The SEC didn’t respond to an email and phone call from Bloomberg News in overnight hours.

Coinbase said it’s been “proactively engaging” the SEC on Lend for six months, and expressed surprise over the possible enforcement action.

“The SEC has told us it wants to sue us over Lend. We have no idea why,” wrote the company’s Chief Legal Officer Paul Grewal. He added that the SEC has told Coinbase it considers Lend “to involve a security, but wouldn’t say why or how they’d reached that conclusion.”

Armstrong echoed that sentiment. “They responded by telling us this lend feature is a security. OK - seems strange, how can lending be a security?” he wrote on Twitter.

Coinbase said it’s not planning to launch Lend until at least October as a result of the SEC’s actions.