The Pound-to-Dollar exchange rate more than doubled its 2021 gain last week as Sterling took the market by storm, but with enthusiasm building among a broad array of participants and in a still-Dollar bearish market, the British currency could now have scope to attain three-year highs above 1.43 by March.

Pound Sterling has benefited from its "strongest real money buying ever" thus far in February in addition to a likely accumulation as well as diversification of foreign exchange reserves among global central banks.

All of this has been made possible by a brightening economic backdrop and an upbeat Bank of England (BoE) stance on the monetary policy outlook.

"The scaling back of BoE rate cut expectations continues to be supported by building optimism over a stronger recovery in Q2 onwards given the relatively fast vaccine roll out. Recovery optimism appears to have been captured in the latest PMI surveys," says Lee Hardman, a currency analyst at MUFG. "Strong bullish momentum suggests further near-term gains. A break above the 1.4000-level could open the door to a retest of the April 2018 high at 1.4377."

Above: Sterling Vs the majors over selected timeframes. Source: Netdania Markets.  Click for closer inspection.

The BoE was bullish in its assessment of Britain's economic recovery prospects this month and confident that its 2% inflation target will be attained over the medium-term, which was effectively an all-clear for the market pile into the Pound and one that has since given way to a sharp rally.

This has seen the Pound-to-Dollar exchange rate rise above the 1.40 handle during the last week after entering the February month around 1.36, in line with Pound Sterling Live's forecast which may have seemed to many a reader like a wildly bullish, if-not unlikely projection.

"The main news next week will be Johnson's speech on Monday setting out how COVID-19 restrictions will be eased. Labour market data for December (due on Tuesday) will probably show that the unemployment rate ticked up again from 5% to 5.1%. And half the MPC will be interviewed by the Treasury Committee on Wednesday, which may give us some insight into how policy evolves as the recovery begins," says Thomas Pugh at Capital Economics. 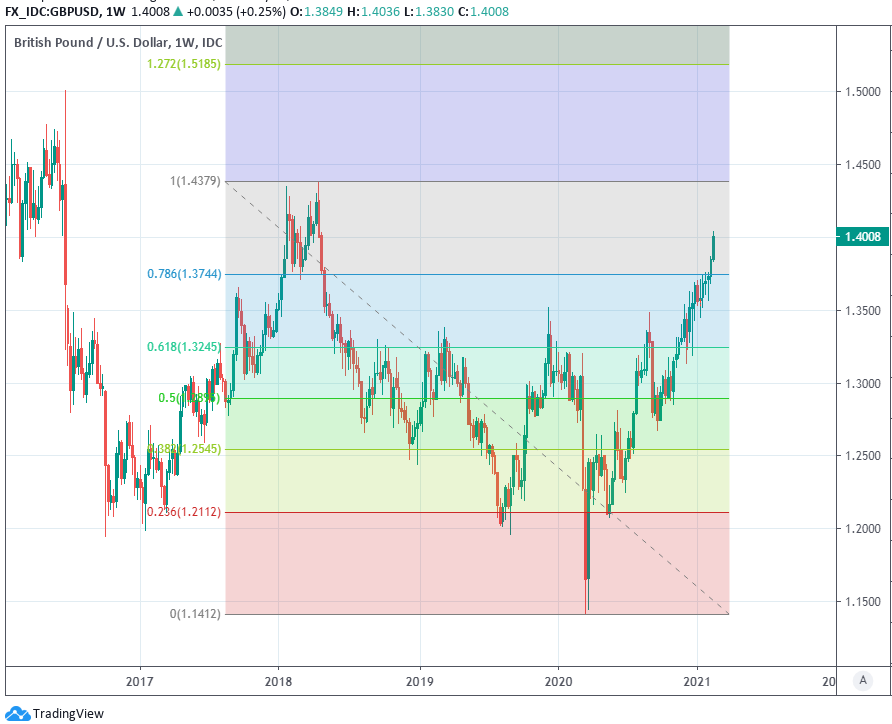 Above: Pound-Dollar rate at weekly intervals with Fibonacci retracements of 2018 fall indicating resistance at 1.4379.

The rally is not yet over, however, according to multiple analysts. Sterling may be bolstered as soon as Monday when Prime Minister Boris Johnson is expected to set out to  parliament a plan for enabling the country to exit 'lockdown'. A reopening as soon as quarter-end would put the UK on course for a return to normal months ahead of some European economies, supporting the relative growth outlook and Sterling in the process.

"GBP/USD is interesting, the market filled its time zone gap and shot higher, we have to assume that it is still bid. Attention remains on the topside and our longer term target is the 2018 peak at 1.4377," says Karen Jones, head of technical analysis for currencies, commodities and bonds at Commerzbank.

Jones and the Commerzbank team are buyers of the Pound from 1.38 and are looking for a move up to 1.4240 initially followed by 1.4350 where they intend to exit the position. These levels would leave the Pound at three-year highs and could be seen as soon as this week.