The ECB’s Schnabel clarifies the conditions under which rates can be allowed to go higher | core inflation surprises to the downside | even inflation swaps are distorted.

EUR rates haven’t moved much during the Easter week, though Governing Council members continue to provide colour to the ECB’s reaction function and technical factors continue to distort the inflation outlook.

In the bigger picture, rates are heading higher and curves are steepening, in USD more than in EUR, and EUR rates look more like range for now with new lockdowns in France, USD rates taking a breather and inflation momentum seemingly losing a bit of steam. On the other hand, PEPP purchases fail to impress, which could increase sensitivity to USD rates if markets decide to have another taper run.

Schnabel explains why rates can rise

Executive Board member Schnabel explains how the ECB’s reaction function differs from yield-curve control in two ways: The ECB’s yield cap is soft and a moving target.

Firstly, Ms Schnabel tells us that the ECB accepts higher longer-term nominal rates if driven by higher inflation expectations and thus leave longer-term real rates unchanged. This is exactly what we have seen so far this year, where 10y swap rates have increased by 30bp, while 10y real rates have not increased at all!

Secondly, she says that the ECB even accepts higher longer-term real rates under the right conditions. In other words, market rates are not allowed to move ahead of the economic recovery, but are allowed to rise in tandem with equilibrium rates. This part adds even more flexibility to the ECB's reaction function since equilibrium rates are unobservable.

Bottom line: rates may rise for the right reasons, but the ECB will step up PEPP purchases to prevent rates from rising for the wrong reasons. The right reasons being inflation expectations and the strength of the recovery to the extent that it affects equilibrium rates.

Core inflation surprises to the downside

The March print showed a spike in headline inflation to 1.3% y/y from 0.9% y/y in February due to energy prices, while core inflation surprised to the downside. Headline inflation is likely to rise further in April and May and again towards the end of the year, but due entirely to temporary factors.

A sustained increase in inflation requires higher core inflation! The problem is just that numerous technical factors are at play and it is almost impossible to distinguish the trend from the noise. Still, it is much harder to see core inflation moving higher in the Euro area than in the US even on the other side of the pandemic, though also hard to see a move back towards last year's lows.

Garment prices are good examples of the problems with seasonality. No winter sale this January meant prices were higher than usual for the month, pushing “core inflation” up, while prices may not have risen as much as usually in March, holding back “core inflation”.

Chart 2. Surprisingly weak core inflation could once again by seasonality 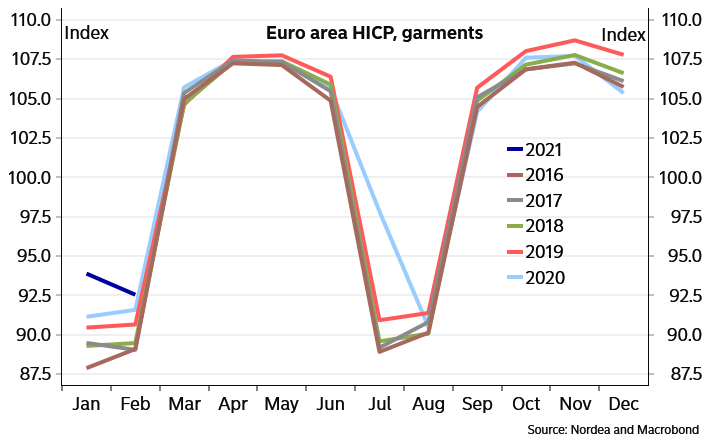 Inflation swaps have had quite a run and fundamentally we still expect higher implied inflation as the big trend as the ECB is likely to eventually succeed in re-anchoring inflation expectations at target, but the disappointing core inflation print seems to have taken some steam out of the market.

As of April, inflation swaps trade with January base – the month when inflation prints were much higher due to new weights and no winter sales in certain countries – which may explain part of the drop in outright inflation swap rates and the spike on the curve. Fundamentally, not much has changed. 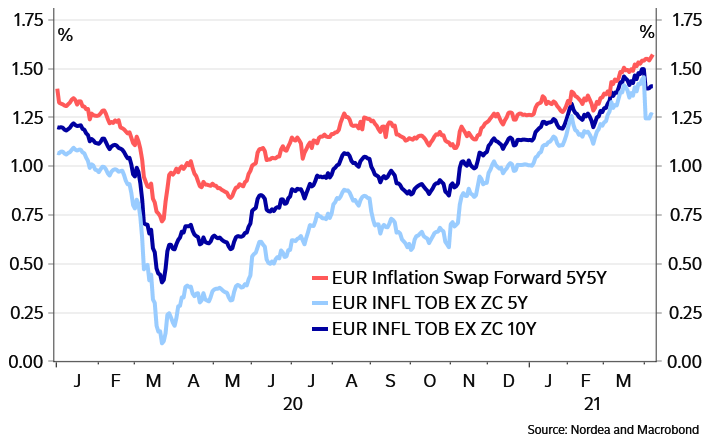 We still prefer carry and convexity trades with little correlation to outright and curve. We also prefer long-end steepeners to outright payers, to receive in the front and in vol space and prefer to pay the inflation curve. If 10y rates move a bit sideways from here, we could see vols come down from elevated levels and add a 5y5y receiver ladder for good carry and to be short vega.

We favour carry trades that have low but positive correlation with outright and curve as well as provide a decent amount of convexity. We have the 8y2y/10y10y/25y5y on, which has proven very stable during the sell-off and getting closer to target. We have added a 5y5y receiver ladder, which carries very well and will benefit from lower vol.

We favour long-end steepeners over outright payers. We have the 8y2y/12y3y on, which is highly correlated with 10s30s but has better roll and suffers less from negative convexity. It performed nicely in the early parts of the sell-off. Timing is perhaps not the best to take on more steepeners here.

We favour inflation trades rather than outright nominal rates payers or as a hedge against a sustained rise in rates. We like paying 5s10s.

We favour front-end receivers as the ECB is going nowhere. Buying a 3y1y seagull utilises the rolldown in rates as well as on the vol curve to give decent carry with limited downside unless markets start pricing ECB hikes.