The Canadian Dollar is billed as a buy-on-dips candidate at BMO Capital Markets ahead of next week’s national budget and Bank of Canada (BoC) monetary policy decision, which may impact international appetite for the Loonie.

Canada’s Dollar remained the best performing major currency of 2021 on Friday as it continued to trade around the 1.25 handle against the U.S. Dollar, which has softened concurrently with a turn higher for European currencies.

The Pound-to-Canadian Dollar meanwhile looked set to record a 0.60% gain on the week, having quoted at 1.7276 at the time of publication.

The Canadian Dollar's 2021 outperformance comes ahead of a landmark week for the Canadian domestic backstory, beginning on Monday with the annual budget which is set to be unveiled in the European afternoon.

It also comes on the back of a strong run toward improvement in Canadian economic figures including GDP that was more resilient to a New Year lockdown and a job market recovery that has endured despite enhanced coronavirus containment measures that burdened Canadian households and firms during the first quarter.

"An improving economic outlook has weakened the case for stimulus worth 3-4% of GDP, though the government’s appetite to spend likely hasn’t changed," says Josh Nye, a senior economist at RBC Capital Markets.

"Our forecast assumes the economy will be operating close to full capacity by this time next year, significantly sooner than envisioned in FES 2020. A closed output gap is the Bank of Canada’s guide for when it should start withdrawing monetary stimulus and we think the government should take a similar approach," he adds.

Attention next week turns to the Bank of Canada (BoC) which is widely expected to upgrade its economic growth forecasts and somewhat significantly too in order to reflect economic outcomes that were much more favourable than those the bank was expecting in January when it last made a set of forecasts.

The BoC said in March that it now expects Canada’s economy to have grown last quarter when previously it anticipated a contraction, while the bank and some of its rate setters have indicated they could also set out a plan next Wednesday for slowly winding down Canada’s first quantitative easing programme.

None of this is negative for the Canadian Dollar, even if much of it has already been priced-in.

“With this being our fourth foray below 1.2500, and our second move below that key level this week (it's also 0.8000 in loonie notation), we don't think there will be much option barrier defence and strike gravity at play today. We also suspect that EURCAD cross traffic is likely to have cleared out of the market, which should allow USDCAD to trade more in alignment with correlated financial prices next week heading into two key mid-week events: the unveiling of the budget on Monday at 16:00 EDT and a BoC policy decision (plus MPR update) on Wednesday,” says Greg Anderson, global head of FX strategy at BMO Capital Markets. “We think they pose more downside risk for USDCAD than upside risk.”

Anderson said Friday he and the BMO team would be inclined to sell rallies in USD/CAD as a move below 1.25 would, in their view, be occurring with better “fundamentals” in the place than those which prevailed in February and March when the Canadian Dollar was last seen trading around 0.80 or above and the U.S. Dollar below 1.250 in USD/CAD.

BMO’s rotating financial factor model, which uses a number of variables composed mainly of other asset prices to predict short-term movements in USD/CAD, advocated on Thursday that the models’ users bet on a decline in USD/CAD following a divergence between the exchange rate’s level on the market and the underlying perceived “fair value” of the Canadian Dollar. 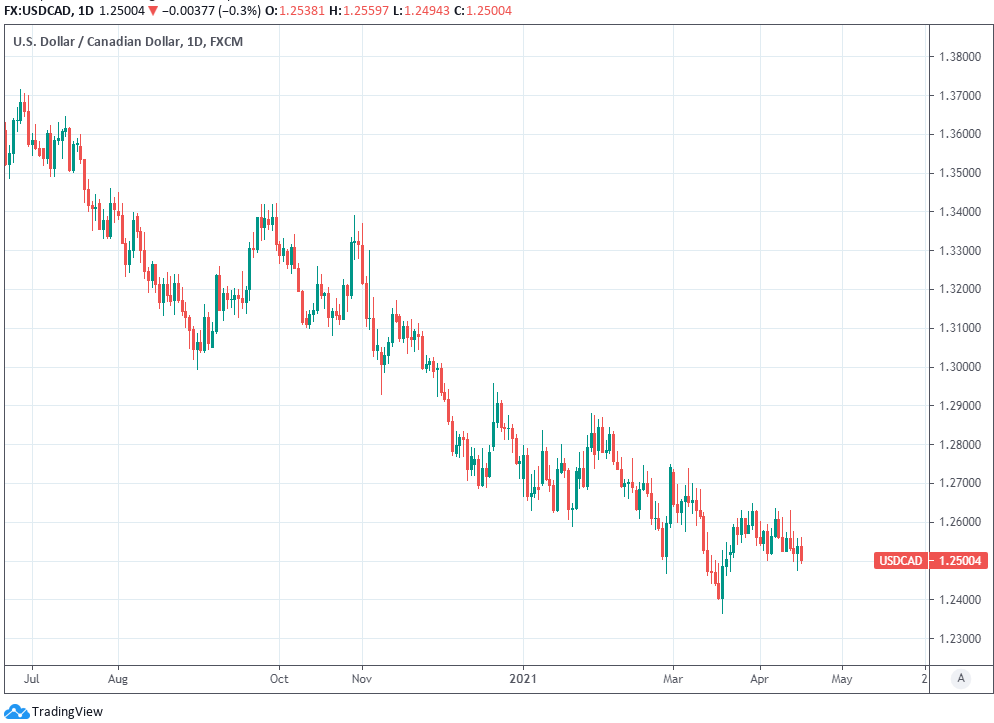 Above: USD/CAD at daily intervals.

The Canadian Dollar’s fair value has risen amid a decline in U.S. bond yields, which impacts bilateral interest rate differentials that can be important influences on exchange rates, while the Loonie itself actually declined in somewhat anomalous price action.

The model estimated that Canada’s Dollar is being driven mainly by copper prices and changes in the S&P 500, while implying that the true underlying value for Loonie sits somewhere between 1.2532 and 1.2462 while having a downward slope when expressed in USD/CAD terms. 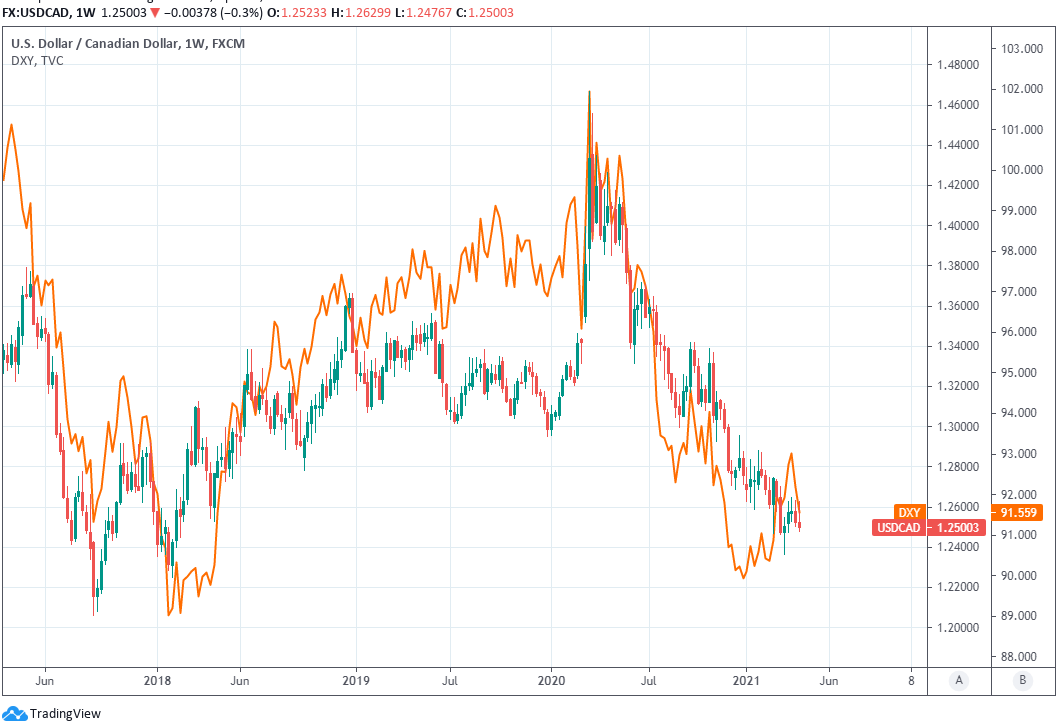 Above: USD/CAD at weekly intervals alongside U.S. Dollar Index (orange).

“Weekly charts still highlight downside momentum, despite the fundamental rationale for a move higher being a bit more compelling. Seasonals are working for the CAD so our view of a move higher might require some patience. We’re expecting buying pressure to come in ahead of any test of the 1.2450 level,” says Bipan Rai, North American head of FX strategy at CIBC Capital Markets. “While we remain near-term USD bulls, we acknowledge that price action will need to find some measure of support for that view to remain intact.”

BMO’s industry counterparts over at CIBC Capital Markets have a differing outlook for the Canadian Dollar as well as U.S. greenback and have noted that the trade-weighted U.S. Dollar is approaching lows last seen in mid-March where they expect a rebound in the short-term.

Divergence between both firms’ short-term views, coming amid a widespread decline in the U.S. Dollar, may if anything indicate sideways or range-bound trading for USD/CAD up ahead.

Canada’s Dollar benefited notably from the first quarter rebound seen in some U.S. Dollar exchange rates and it has in the past been known to temporarily underperform alongside the greenback whenever European currencies are shifting onto the front foot at the expense of the U.S. currency.

That may be something that is driven more by global factors than the domestic, although with next week playing host to the Canadian budget update as well as the latest Bank of Canada decision this global dynamic may easily be lost as domestic news flow picks up.