Residents and traders across Kano, Jigawa, Lagos, Anambra and Yobe states have continued to lament the impact of the unavailability of new naira notes as… 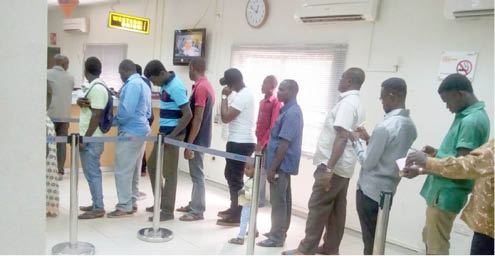 Residents and traders across Kano, Jigawa, Lagos, Anambra and Yobe states have continued to lament the impact of the unavailability of new naira notes as well as the challenges they are facing in getting their old naira notes into the banking system.

This is even as many businesses have closed up and markets are operating at a reduced capacity as the deadline for the collection of old naira notes draws nearer. Many of the business owners said they have not even sighted the new naira notes since its release with a reliable source informing Daily Trust that only about N200billion of new Naira notes were produced to cater for a system with about N3.1trillion in circulation, thereby making the new notes inaccessible to residents.

Residents in Gashua, Nguru, Gaidam and other local governments in Yobe State said they have been finding it difficult to get their old naira notes into the banking system as the few commercial banks in the area sometimes refused to open for collection of the old new notes from marketers in some of the LGAs.

Daily Trust gathered that many people were stranded at the banks premises with millions of old Naira and that some of them were chased out by the police officers guarding the banks.

Furthermore, in other places like Nguru LGA, shop owners have issued a deadline that they will stop collecting the old naira notes on 29th and 30th of this month, an incident that plunged people into a mad rush for food stuff.

In several local governments in Yobe State, many people were sighted patronising day-to-day useful items from provision stores in huge quantities with many of the shops now closing up due to the fear of whether they may not be able to deposit the old Naira notes in the bank within the required time.

A resident of Gashua, Nura Dalhatu, said the incident has led to rise in the prices of commodities while some major markets and shops have closed.

He added that some local government areas have no banks and have to come through Gashua and deposit millions of naira but they are now left with fear of whether they will be accepted or not.

“This morning (Sunday) we woke up to a tragic incident in this town as the major markets that operate within and outside these LGAs are all closed. This is as a result of fear of collecting the old Naira notes. You are not certain whether they can be deposited in banks. Like our market and the Gaidam market are one of the biggest cattle markets and people make huge sales running into hundreds of millions every week. But this time around we have to close.

“Even some shops inside the town are closing, which led us to buy a mudu of local rice at N2000, something that was normally sold at N1300. The consequences have already started,” he said.

He lamented that if the situation continues, many people, especially business owners will lose a lot, as people from villages have cash in their hands that are yet to be deposited.

“I know of people that come to these markets from Niger Republic, Kano, Jigawa, and other states. But today, (Sunday) they have not come. Imagine the millions we are going to lose today alone,” he said.

Umar Madu Bukar, a shop owner in Nguru LGA of the state said the fear of losing one’s capital forced many of them to issue the deadline, adding that he will stop collecting on Monday 30th January, 2023.

“Even this one I’m just taking risk, how can I deposit it within one day. The banks are congested and before you get your money deposited you have to spend the whole day there. So it is necessary and we have no option than to do that,” Bukar said.

Daily Trust equally gathered that residents are expressing fear as the situation has led to the price hike in almost all food stuffs.

In Kano, traders in several markets in the state including those at the popular Wapa Bureau de Change market have expressed fears over the impact of the fast approaching deadline set by the CBN on old Naira notes.

The traders, especially those at Wapa forex market said since last Monday, their clients have been refusing to accept the old Naira notes in exchange for foreign currency brought into the market.

Ali Adamu Jauro, a grains dealer in the popular Dawanau International Market, also said it has been announced throughout the market that traders should stop collecting the old naira notes from January 25. He said the alternative given to them is to switch to cashless banking (transfers) since the new notes are also not readily available.

Daily Trust reports that the situation is also similar in some villages in Plateau State where marketers have also issued a January 25 deadline for collection of the old notes and trading activities have suffered in the last few days. Yusuf Mairiga Shekarau, a POS operator in Yelwa community of Shendam LGA area of the state said he had stopped collecting the old naira notes as banks in Shendam have warned them not to collect them.

Shekarau said “We don’t have banks in our community. We always have to take the money to Shendam town where there are banks. The last time we went, they told us they would stop collecting the old naira notes from January 25th.  They also said whoever comes with the money, they would have to take it to Jos where they have the main branches and deposit the money or take it to the central bank.”

In Jigawa State, marketers have also threatened to stop collecting the old naira notes from January 25 so as to be able to beat the January 31 deadline set by the Central Bank of Nigeria.

In Jigawa, Kaila Muhammad (Ka chanchanta), a rice dealer in Hadejia Market said what many of them, especially those from rural areas, were doing was receiving as many old notes as they can finish spending on other goods in the market. This, he said, is even as many traders have vowed to stop receiving the old notes from January 25.

Traders and farmers in Southern Nigeria have expressed displeasure over the non-availability of the redesigned naira notes.

A cross section of traders who spoke with our correspondent in Lagos sought for an extension of the January 31 deadline, noting that the redesigned notes are not in circulation despite assurance by the Central Bank of Nigeria, CBN.

“This is affecting us because most of us don’t keep money in the bank. What is the worth of what I am selling that I will be going to the bank? I buy what I need from the money I make from the sales of the previous day so why do I need to keep money in the bank?” noted Mrs Kadijat Abimbola, a pepper seller at Oke-Odo market in Lagos.

The Deputy Chairman of All Farmers Association of Nigeria (AFAN), Lagos State, Mr Shakin Agbayewa, said it is regrettable that the government has not recognised that micro, small and medium enterprises are the backbone of the economy. He said the policy to redesign the Naira notes didn’t take into cognisance the implications on farmers and traders who don’t operate bank accounts.

Yobe State governor, Hon. Mai Mala Buni CON, has appealed to the Central Bank of Nigeria (CBN) to give a special concession and alternatives to the people of the state against the 31st January dateline for change of Naira notes.

Governor Buni, in a statement by Mamman Mohammed, his DG, Press and Media Affairs, said the appeal became necessary due to lack of banking services in most parts of the state.

“Some of the banks with branches in the local government areas closed the branches at the peak of the Boko Haram security challenge but are yet to reopen in spite of the improved security in the state.

As part of efforts to facilitate the circulation of its new naira notes, the CBN has launched a cash swap programme across local government areas in Nigeria.

The apex bank made this known in a circular addressed to all DMBs, mobile money operators (MMOs), super agents and agents.

The apex bank said the cash swap programme is in partnership with super agents and deposit money banks (DMBs) at different parts of the country. Super agents refer to companies licensed by the CBN to recruit for the purpose of agency banking.

Meanwhile, the apex bank said, “The agent shall exchange a maximum of N10,000 per person. Amounts above N10,000 may be treated as a cash-in deposit into wallets or bank accounts in line with the cashless policy. BVN, NIN, or Voter’s card details of the customers should be captured as much as possible.

“To promote financial inclusion, this service is also available to anybody without a bank account. Agents may, on request, instantly open a wallet or account, leveraging the CBN Tiered KYC Framework. This will ensure that this category of the populace are able to exchange or deposit their cash seamlessly without taking unnecessary risk or incurring undue cost,” the bank said. Effort to get the CBN’s Director of Corporate Communication, Osita Nwanisobi to react to the allegation of some banks rejecting the old was not successful as his lines could not be reached as at press time.