The world's largest ever bitcoin transaction has taken place, with just over $1 billion (£802 million) worth of cryptocurrency transferred between accounts.

The single transaction of 94,504 bitcoins represents around 0.5 per cent of all bitcoins currently in existence, and it has left analysts confused by who made it and for what purpose.

The semi-anonymous nature of bitcoin means it is possible to view the transfer on its blockchain – the public ledger that records transactions – but it is not possible to know who made it.

Such a large amount of bitcoin has the potential to crash the cryptocurrency market if it is cashed in for fiat currency. Big sell offs in the past have resulted in flash crashes, with bitcoin losing almost $1,000 from its value in the space of just 24 hours in September 2018 as a result of a major trade.

“Since the advent of bitcoin futures in early 2018, we are now seeing massive market manipulation and suppression by whales and experienced futures traders,” Phillip Nunn, chief executive officer at Wealth Chain Capital, told The Independent at the time.

In 2011, a transaction of 550,000 bitcoins was recorded on the blockchain, though at the time this amount of cryptocurrency was only worth around $1.6 million.

Cryptocurrency analysts have attempted to trace the bitcoin but have been unable to pin it to a particular individual or group.

Blockchain analysis firm TokenAnalyst discovered that a significant portion of the bitcoin came from addresses registered with Huobi Global, a Singapore-based cryptocurrency exchange.

"$1 billion of bitcoin was transferred in one transaction... Where did that come from?" the firm tweeted. "We took a look and saw that a large percentage of it could be traced to @HuobiGlobal addresses." 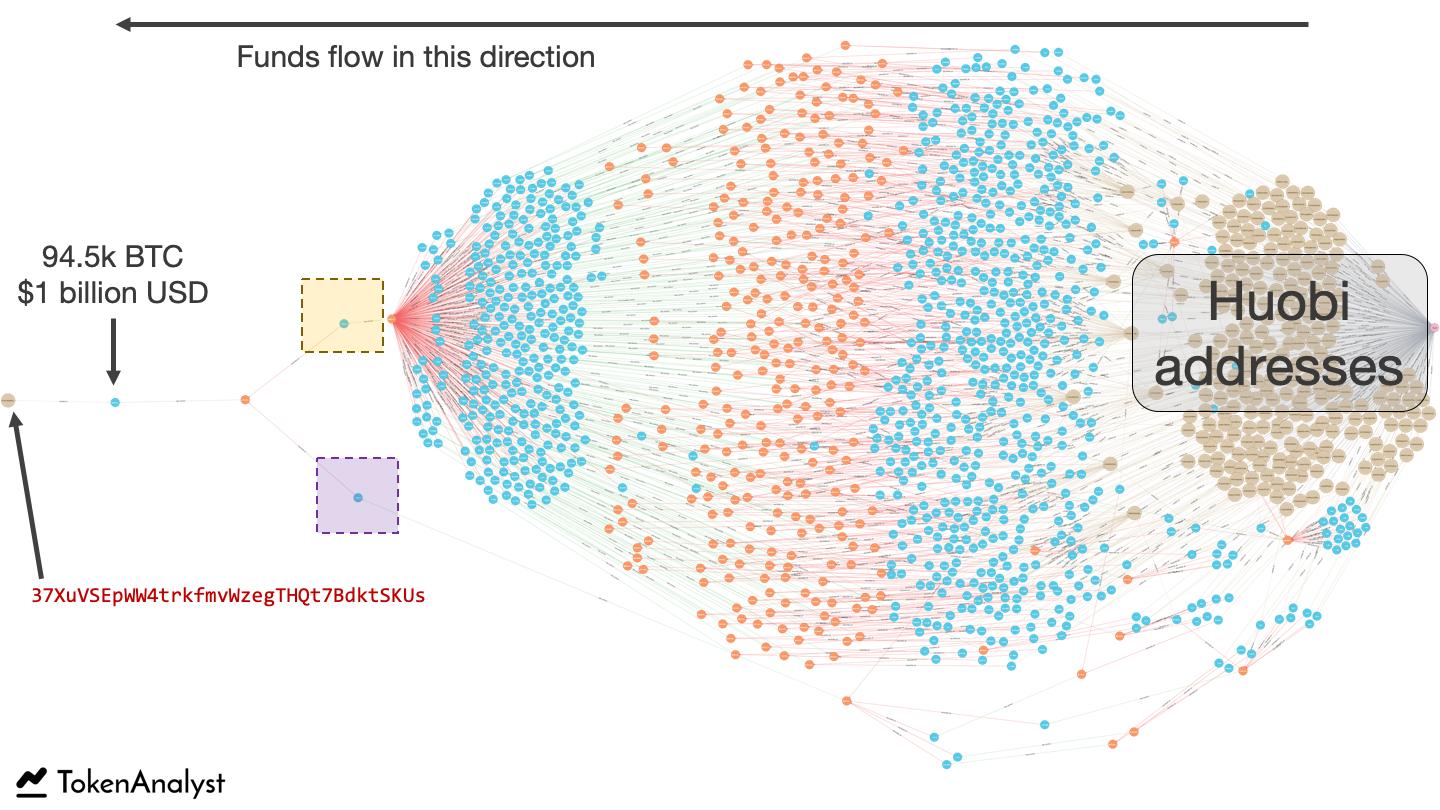 A flow chart showing where the bitcoin originated from (TokenAnalyst)

The funds are yet to move since being transferred last week, though small amounts of bitcoin continue to be added to the address.

Theories about who controls the address have been circulating online. They range from an early adopter who decided to consolidate their addresses, to a large company that is stockpiling cryptocurrency in the event of a global financial crash.

Another theory suggests that bitcoin futures provider Bakkt is using the address to store customer funds. The company's announcement of a new digital "warehouse" for bitcoin deposits and withdrawals came just hours after the billion-dollar transaction.