Africa Borrowing Like It’s the 1990s Worries the IMF - BLOOMBERG

Record commodity prices and low global interest rates have encouraged African countries to borrow like they did in the 1990s, but now some are struggling to pay up as their revenue slows along with economic growth.

Government debt as a percentage of gross domestic product in sub-Saharan Africa has doubled in the past decade, heading back toward the level it reached at the turn of the century. International Monetary Fund Managing Director Kristalina Georgieva said in November this is a cause for concern. Of the 54 countries on the continent, 20 are near or at distressed levels, according to the IMF, which means they face difficulties honoring their obligations.

African governments have raised about $26 billion in international markets this year, from close to $30 billion in 2018, as they took advantage of investors’ thirst for returns in a world awash with negative yields. Volatile currencies across the continent increase the risks of borrowing in hard currency and the rising cost of servicing debt could crowd out other expenditure in a region that’s home to more than half of the world’s poor people. 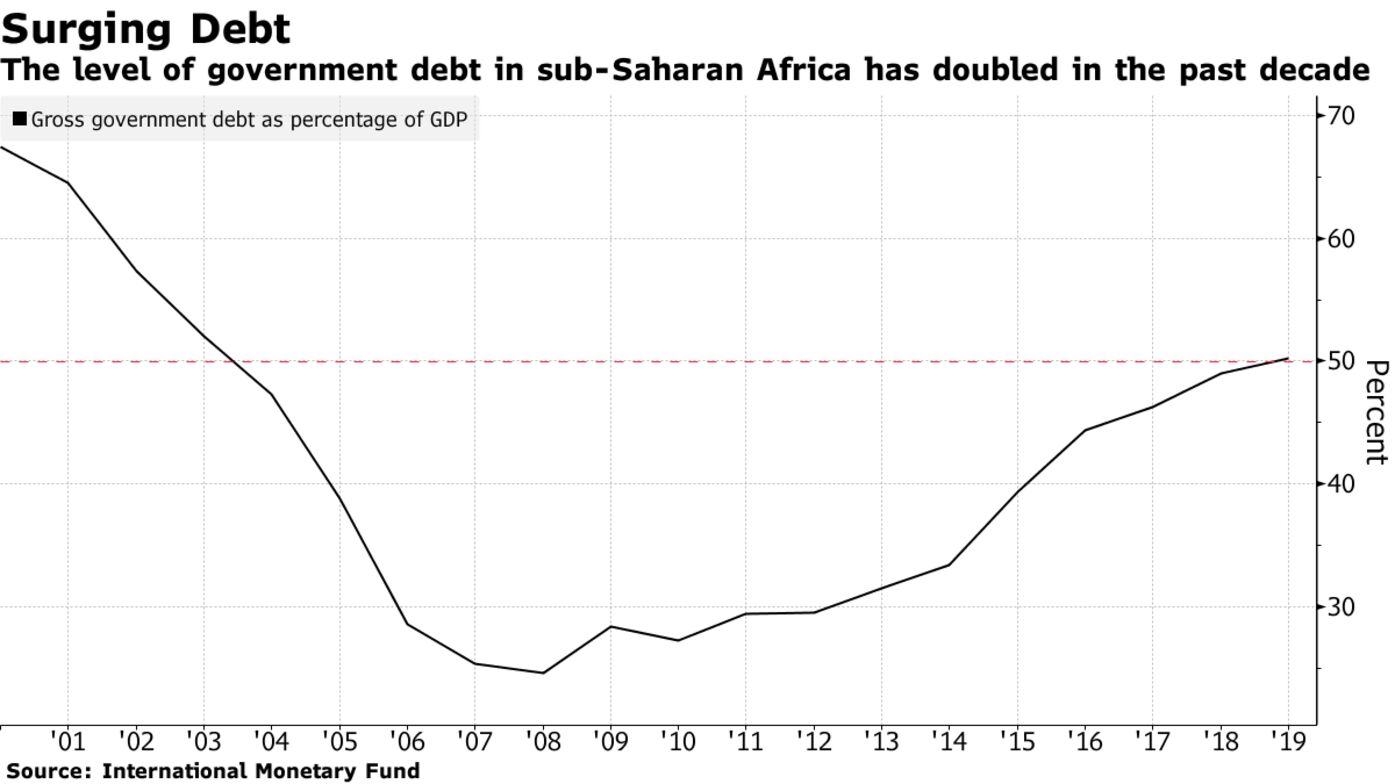 “The conditions are ripe for a much higher level of debt distress,” Sonja Gibbs, head of sustainable finance at the Institute of International Finance, said by phone. “Whatever triggers the next crisis, when it happens, you are likely to see a high degree of contagion risk because investors have been moving into higher yielding assets.”

Further fanning fears of a new crisis is the surge in direct credit from China. The China Africa Research Initiative at Johns Hopkins University estimates that the Asian country’s government, banks and contractors handed $143 billion in loans to African states and state-owned companies between 2000 and 2017.

Still, Africa is far from a debt crisis, its biggest multilateral lender says.

“Some individual countries are getting to higher levels in terms of debt-to-GDP ratios, that’s the concern,” African Development Bank President Akinwumi Adesina said in an interview. The debt-to-GDP ratio of Africa is still “well within acceptable limits,” he said.

More reliance on commercial bonds has raised debt servicing costs, diverting funds that could be spent on new roads or schools. Nigeria, the continent’s top oil producer, spends about the same amount every year on repaying debt as it does on infrastructure.

Countries such as South Africa, the continent’s most industrialized economy, are raising debt levels and this year had its biggest Eurobond issuance yet to help plug a widening budget deficit.

External debt payments now consume an average 13% of African governments’ revenue compared with 4.7% in 2010, according to data compiled by the U.K.-based Jubilee Debt Campaign.

Overspending and crashing commodity prices in the 1990s led to a debt crisis that prompted multilateral lenders and rich nations to write off the obligations of dozens of African countries in 2005. This time around a debt pardon may not be that easy.

The complex debt structure with opaque terms and mix of different creditors will make any potential restructuring agreement more difficult.

“We’re concerned that debt relief might now become more complicated,” said Jan Friederich, a senior director at Fitch Ratings. “Nowadays there is a greater concern that governments, when they forgive any debts, might not actually help the African countries very much, but might primarily be bailing out the commercial creditors.”

— With assistance by Saul Butera, and Lyubov Pronina

(Updates with loans from China in fifth paragraph)