LONDON (Reuters) - The Bank of England is closer to cutting interest rates next week than at any time in the last three years, as governor Mark Carney chairs his last policy meeting and Britain finally leaves the European Union. 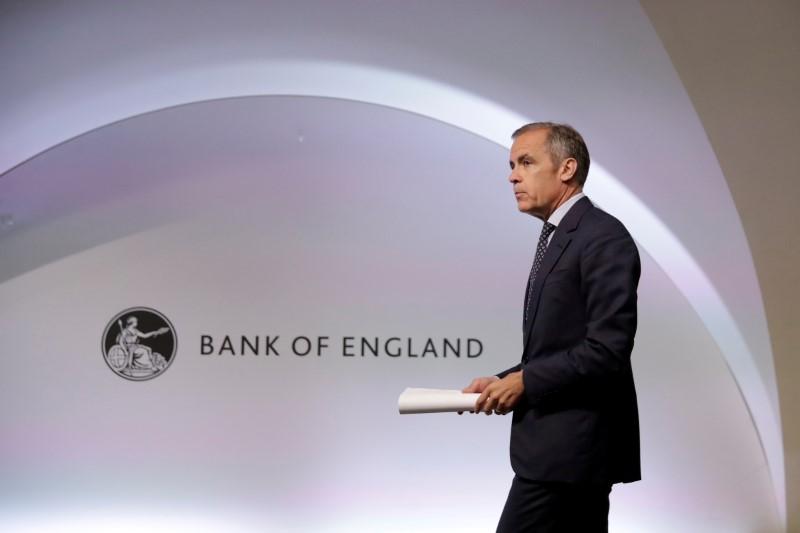 Growth at the tail end of 2019 slowed to its weakest since 2012, prompting Carney and two other policymakers to speak publicly about the possibility of a rate cut, adding their voices to two others who had already voted for looser policy.

But there has been a bounce in business and consumer sentiment since Prime Minister Boris Johnson won re-election on Dec. 12 with a bigger than expected majority. Twinned with a tight labor market, this undermines the case for a cut by Britain’s central bank.

Friday’s flash purchasing managers’ index (PMI) was the strongest since September 2018, reinforcing economists’ doubts about the wisdom of a rate cut now.

“In light of today’s PMI and other recent surveys, there is perhaps more value in waiting for more data before using up valuable and limited monetary policy ammunition,” HSBC’s chief European economist Simon Wells said.

The BoE skipped last year’s policy loosening by the U.S. Federal Reserve and the European Central Bank, partly due to the risk that Britain might crash out of the EU without a deal, requiring a more decisive policy response.

Economists polled by Reuters last week were more cautious, on average predicting a 35% chance of a cut.

The last time the BoE cut rates was in August 2016, when business and consumer surveys incorrectly predicted the economy was on course for a sharp slowdown after June 2016’s referendum decision to leave the bloc.

British gross domestic product grew just 0.6% in the year to November, its weakest since 2012 and well below the 1.2% that the BoE has forecast for 2020, which itself is a bit less than what the BoE sees as Britain’s post-Brexit potential.

However, the unemployment rate is its lowest since 1975 at 3.8%, job creation is solid and annual wage growth of just over 3% is above its post-financial crisis average.

The challenge for the BoE is whether the economy is now recovering from a period of political turmoil in late 2019, or if this is just a hiatus before worries over longer-term trade barriers with the EU re-emerge.

Carney said in a Jan. 9 speech that there could be a case for cutting rates on a “risk management” basis. With interest rates close to zero, a rate cut now could stop a steeper downturn that the central bank would find harder to stem.

But if growth picks up this year, that would hand Carney’s successor, Andrew Bailey, the task of tackling the perception that the BoE made a policy mistake.

Bailey takes over on March 16. His views on monetary policy are unknown, as he has headed Britain’s Financial Conduct Authority since 2016, and at the BoE before that he largely worked in financial regulation.