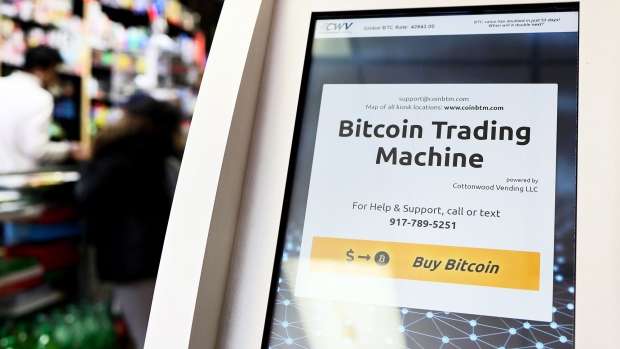 (Bloomberg) -- There’s no question that Bitcoin often gets sold as an inflation hedge. So much of the story is about the Fed printing all this money and how there’s only 21 million bitcoin, and so something something something, the number will go up due to inflation. You’ve heard it a million times.

Well, today we got one of the hottest inflation prints in years. By one measure, the consumer price index had its fastest gain since 2009. So how’s Bitcoin doing? Not great. Here’s the intraday chart, with the time of the CPI print marked by the vertical line

Now you might say, well sure, but the hot inflation was well-known, it was priced in, in some way. And that the number we got today helps explains the extraordinary gains over the last year. But that’s pretty weak. It’s clear that the CPI reading did, in fact, surprise other assets. Five-year yields are up substantially on the day, showing traders did not anticipate such a big increase in inflation.

Look, to be fair, this is just one day and you can’t make big sweeping conclusions about the role an asset plays in global portfolios from four hours of trading. Nonetheless, we do have a few more clues out there. In addition to Bitcoin selling off, we’re seeing tech get hammered (down 2%) and the real speculative stuff like the ARKK exchange-traded fund down over 3%. So from that perspective it looks like Bitcoin is simply behaving as a risky, speculative asset, which both explains its action today and also over the last year. Gold is also down on the day (speaking of assets mis-sold as an inflation hedge).

Of course, gold, highly speculative tech, and Bitcoin all have something in common, which is that they don’t generate cash flow in the here and now. When economic growth is sluggish, that’s not really a big deal, of course, ‘cause nobody’s making much money in the first place. But when the economy is red hot, and you can make good money with lumber or gasoline or chips or labor, then why put your money in such future-oriented assets that aren’t paying anything today?