Currency traders appear to be just as perplexed as the Trump Administration when it comes to the dollar.

The most important market news of the day.

Get our markets daily newsletter.

With the greenback’s fortunes ebbing and flowing as the White House sends mixed signals on its preferences for the currency’s strength, sleep has been hard to come by. Even the administration’s policy prescriptions have kept traders guessing. More infrastructure spending, revitalized manufacturing and lower taxes should spell faster growth and inflation -- and a stronger dollar. But the focus lately has been on restrictive trade and immigration measures, dimming growth prospects -- and sending the greenback into a tailspin. 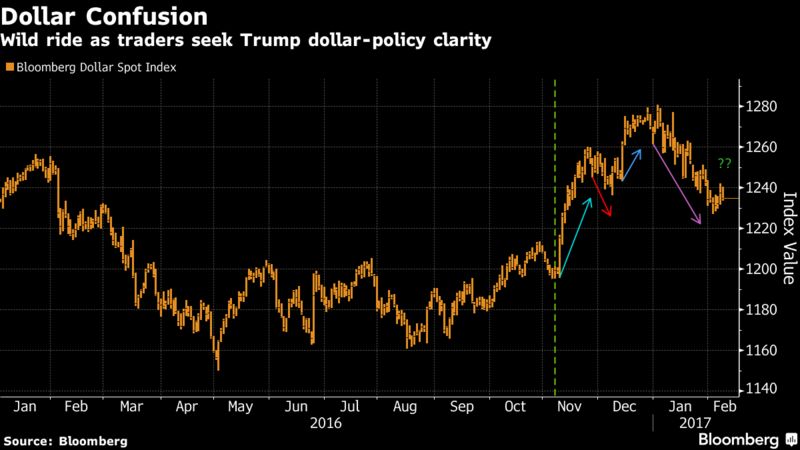 After Steven Mnuchin, Trump’s pick for Treasury secretary, seemed in early December to fall in line with long-held policy of the government supporting a stronger dollar, things have become much less clear. The president has since said China and Japan had unfairly devalued their currencies, while his trade adviser Peter Navarro said the euro was “grossly undervalued.” And Mnuchin himself has since seemed to adjust, saying in January that an “excessively strong dollar” could have a negative short-term effect on the economy.

“The thinking among market participants is that the U.S. strong-dollar policy has ended,” said Neil Jones, head of hedge-fund sales at Mizuho Bank Ltd. “But the strong dollar has not necessarily ended. That’s why there is some dilemma in the market.”

That’s because traders are still hopeful that over the long-term, Trump will bolster growth by lifting infrastructure spending, cutting taxes and reducing regulation.

Adding to the cloudy outlook for the buck is that not everyone is convinced that Trump will in the end push through pro-growth agenda changes. 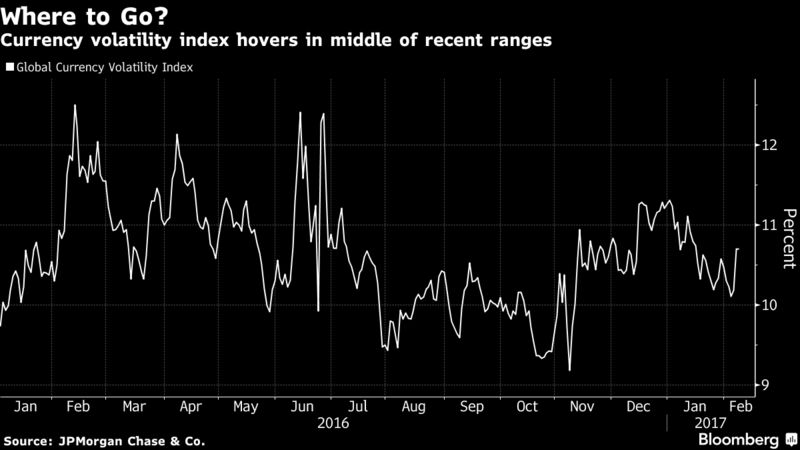 BlackRock Inc.’s Chief Executive Officer Laurence D. Fink said Wednesday businesses are in a "slow down" because of the uncertainty about whether Congress and the new administration will enact policies that energized markets after the election.

Fink speaking at the Yahoo! Finance All Markets Summit Wednesday said the 10-year Treasury yield could fall below 2 percent or rise above 4 percent, or the markets could even see both outcomes. The 10-year yield was at 2.35 percent Wednesday.

The Federal Reserve for its part added support to the dollar in December by ratcheting up by a quarter a percentage point its policy rate band. That has lost steam, with traders now not seeing more than a fifty-percent probability for another hike until June, after wage growth stalled in January.

“The market is in this state of confusion in terms of how to price the timing of this stuff,” said Brad Bechtel, a currency strategist at Jefferies Group LLC in New York. And government officials recently “have had nothing but negative dollar comments. There is a lot of ebbing and tiding in terms of the news flow and it is really putting traders frozen in their tracks.”