The European Union set new criteria for the use of palm oil in biofuels in a balancing act to try to avert a trade war with producers in Asia while appeasing climate protagonists at home.

The measure approved by the European Commission on Wednesday spells out the type of biofuels from palm oil that may be counted toward the EU’s renewable-energy goals and introduces a certification system. It was required by a broader law agreed on by the 28-nation bloc last year, when the European Parliament pushed for restrictions on the use of palm oil on concerns its production caused deforestation and aggravated climate change.

Indonesia and Malaysia, which together account for 85 percent of global supply, have warned that they are ready to retaliate against “discriminatory” measures to curb palm oil shipments. Palm oil prices have dropped 15 percent since the start of 2018 amid the EU environmental campaign, extending losses on Wednesday.

“Climate change is a serious concern for Europeans and the commission is increasing efforts to reduce greenhouse-gas emissions,” the EU regulatory arm said in a statement.

The EU wants to lead the battle against global warming and has toughened goals to reduce greenhouse gases blamed for climate change. It aims to cut emissions by at least 40 percent by 2030 compared with 1990 levels, boost the share of renewable energy to 32 percent and increase energy efficiency by 32.5 percent. 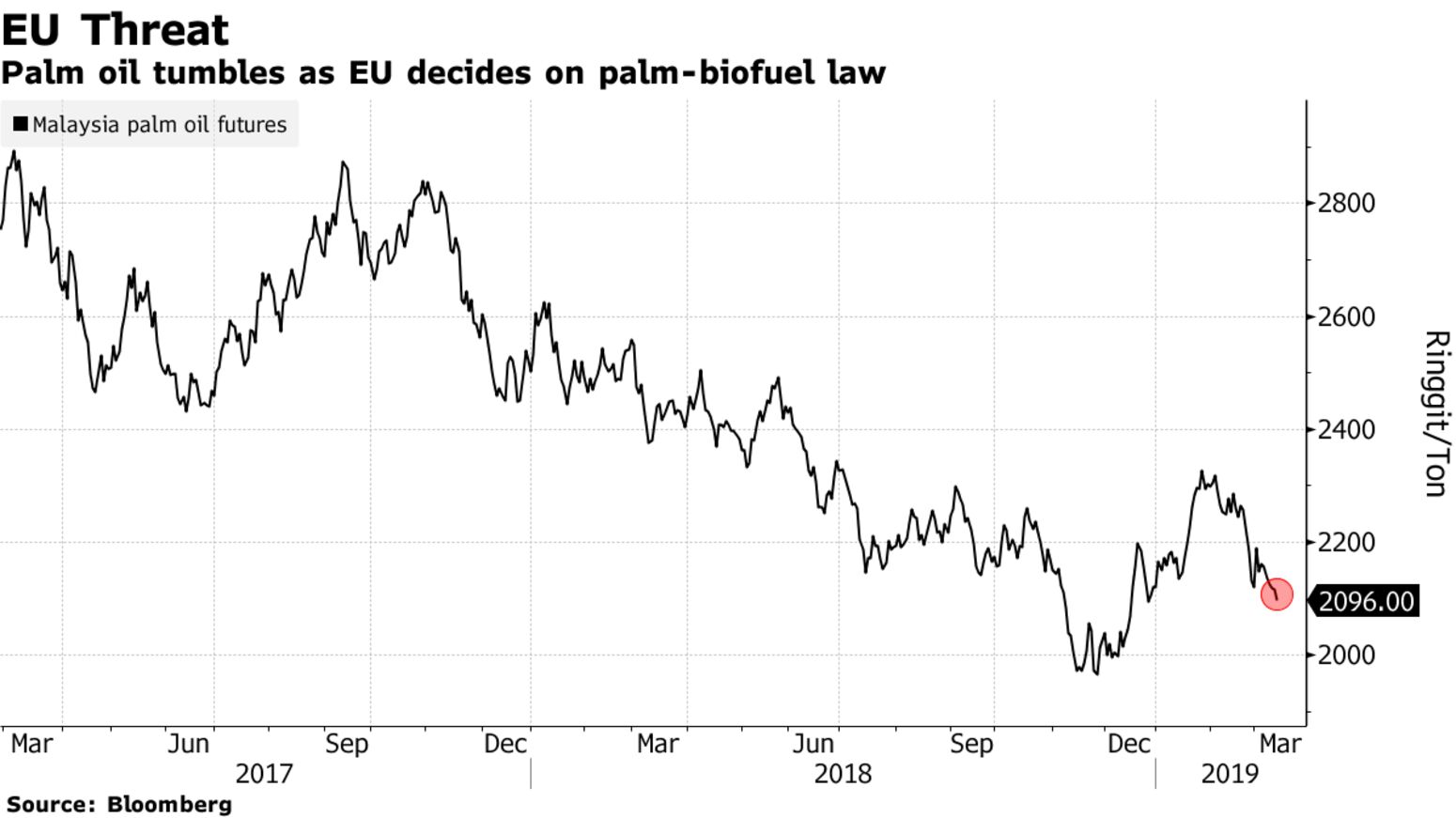 The EU Parliament’s campaign to limit the use of the vegetable oil in renewable fuels polarized member states and was supported by environmental lobbies, which have argued that the EU should end public support for high-emission biodiesel from palm oil, rapeseed and soy. Forty-six percent of total palm oil imports into the bloc are used for biofuels, according to the EU assembly.

Under the measure adopted by the commission on Wednesday, palm oil is classified as “unsustainable” yet some exemptions are offered to placate producer countries, such as the possibility to count under the EU green goals palm oil coming from small farms. The EU decided to set the size limit at 2 hectares, the lower end of the 2-5 hectares range it considered when drafting the regulation.

“Today’s decision to label palm oil as unsustainable is a breakthrough,” said Laura Buffet, clean fuels manager at Transport & Environment lobby. “But this is only a partial victory since soy and some palm oil can still be labelled green.”

The EU renewable energy law that obliged the commission last year to set sustainability criteria for palm oil under its green goals specifies that the use of unsustainable food and feed crop-based biofuels should be limited from 2019, with a view to start a gradual phase-out in 2023 leading to a ban by 2030.

The law also called on the EU regulatory arm to develop a certification system for biofuels linked to their impact on so-called indirect land-use change, known as ILUC, where crop-based biofuels displace food production or lead to deforestation, indirectly boosting greenhouse-gas emissions.

“With today’s decision the member states will still be able to use and import fuels included in the category of high ILUC-risk biofuels, but they will not be able to include these volumes when calculating the extent to which they have fulfilled their renewable targets,” the commission said on Wednesday.

The biggest palm oil producers stepped up lobbying in Brussels to defend its future in the European market. The Council of Palm Oil Producing Countries, whose members Indonesia, Malaysia and Colombia produce about 90 percent of global supply, announced they will jointly challenge the bill through bilateral consultations, as well as through the World Trade Organization. The council said the law uses a “scientifically flawed” concept that targets palm oil and “makes no attempt to include broader environmental concerns” linked to other vegetable oils.

Malaysia plans to halt all expansion of oil palm plantations as it seeks to dispel the oil’s reputation as a driver of deforestation, Minister of Primary Industries Teresa Kok said in an interview earlier this month. The EU accounted for 12 percent of Malaysia’s palm oil exports in 2018, making it the biggest buyer after India, according to the Malaysian Palm Oil Board.

Indonesia has warned that the EU restrictions on the use of palm oil would jeopardize the nation’s fight against poverty. The country’s special envoy on palm oil has said that Indonesia and the EU need to find a “win-win” solution, adding that his country considered buying around 250 new airplanes, with Airbus among possible suppliers.

The EU argues the new measure and palm-oil sustainability criteria are compatible with WTO rules. The new regulation is now set for a two-month scrutiny period when the bloc’s member states and the European Parliament can express objections. If none is received, the measure will be published in the EU official journal and become a law.

— With assistance by Anuradha Raghu

(Updates with sustainability criteria in the seventh paragraph.)