Euro up after ZEW survey; dollar near one-week high after weeks of losses - REUTERS

LONDON (Reuters) - The euro rose on Tuesday after investor sentiment in Germany improved more than expected in August, though the U.S. dollar maintained its gains as U.S.-China tensions and a stalemate in the U.S. Congress over fiscal stimulus supported safe-haven assets.

FILE PHOTO: U.S. dollar notes are seen in front of a stock graph in this November 7, 2016 picture illustration. REUTERS/Dado Ruvic

Germany’s ZEW economic survey of economic sentiment rose to 71.5 from 59.3 points the previous month, far exceeding a forecast for 58.0 in a Reuters poll of economists.

The euro has been bolstered recently by views that the continent was outperforming the United States and handling the coronavirus pandemic much better. 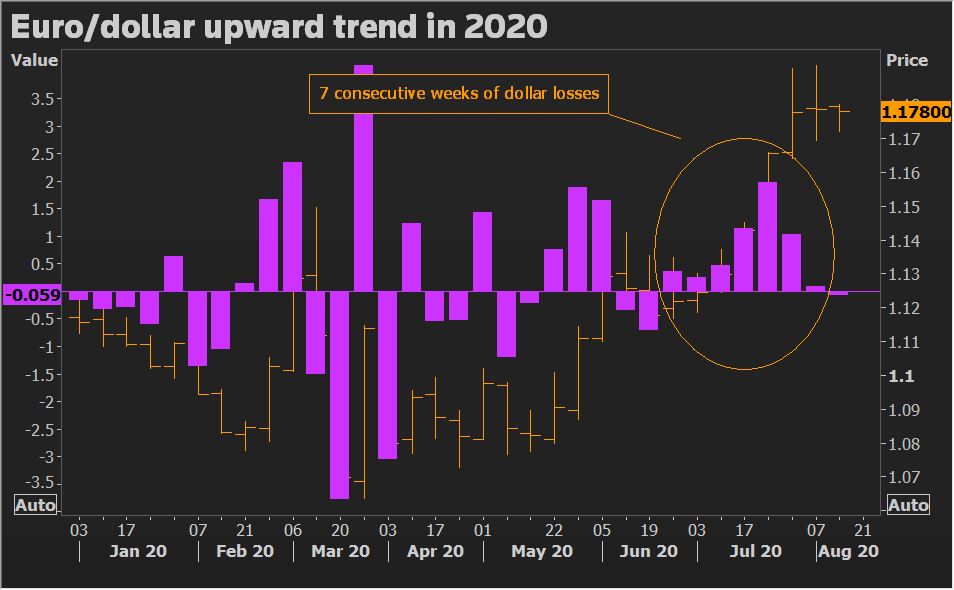 The dollar was up 0.1% against the Japanese yen at 106.06 JPY=EBS as U.S. 10-year Treasury yields rose to two-week highs US10YT=RR before a quarterly U.S. refunding auction on Tuesday.

“Yields have edged up ... to make room for the supply,” Kit Juckes, macro strategist at Societe Generale, said.

Congressional leaders and Trump administration officials said on Monday they were ready to resume negotiations on a coronavirus aid deal. It was unclear whether they could bridge their differences.

And U.S. Treasury Secretary Steven Mnuchin said companies from China and other countries that do not comply with accounting standards will be delisted from U.S. stock exchanges as of the end of 2021.

Market response to the U.S.-China conflict has been limited, but analysts say the confrontations have longer-term implications.

“The market remains in the expectation that everything will turn out for the best in the dispute,” Commerzbank currency analyst Antje Praefcke said. But “an agreement has probably already been priced in accordingly, which means that the dollar has hardly any more upside potential.”

“The euro does not really have that much to offer these days, either ... The bottom line is that with $1.19 we probably have seen the highs in euro/dollar for the time being, but at the same time there are no good reasons for levels below $1.16,” Praefcke said.

Elsewhere, the Turkish lira stayed near Friday’s record low on concerns about the country’s dwindling foreign-exchange reserves, leading to expectations the central bank will take more decisive action to stem its fall.

The Norwegian crown, on the other hand, has flourished as oil prices rose, becoming the best performer so far this week alongside the Canadian dollar and the Russian rouble, according to MUFG analysts.

Sterling was up 0.2% at $1.3095 GBP=D3 after Bank of England Deputy Governor Dave Ramsden said in an interview published on Tuesday the central bank will step up quantitative easing if the British economy struggles again.