LONDON/TOKYO/NEW YORK (Reuters) - Some European and Japanese bond investors are taking on more currency risk by buying dollar debt without protecting themselves against potentially devastating exchange rate swings as they seek ways to compensate for sub-zero yields at home.

A fund manager in Germany can buy 10-year U.S. Treasuries that offer minimal credit risk at yields of up to 1.6%, more than 2 percentage points more than for German Bunds.

But that juicier yield is available only if she eschews expensive currency hedging that could wipe out that whole premium — a vulnerable position that funds have traditionally avoided for fear of adverse exchange rate swings.

Hedging dollar exposure is expensive — at current prices, the German investor’s 2.2% yield pick up on 10-year Treasuries would become a 0.3% loss after hedging.

With some 40% of non-U.S. debt — about $15 trillion — now yielding less than zero, however, it’s a risk that funds —especially those with obligations to insurance policyholders and pensioners — seem prepared to take.

“If you are a euro zone investor, it’s expensive to hedge (dollar exposure) so there has been a temptation to not hedge. And if you didn’t hedge you will have done well.”

Hedges are usually implemented via currency forwards that specify the rate at which a currency may be exchanged over the contract period — usually three or six months. That effectively shields the fund if the foreign currency depreciates against its base currency.

Funds rarely disclose their hedging strategies but interviews with money managers and advisors, data on hedged and unhedged bond returns, and exchange rate moves imply the ratio of unhedged debt holdings in portfolios has been rising.

A survey of corporate clients by U.S. bank Wells Fargo showed 35% of FX exposure was hedged in 2018, versus 47% in 2016, indicating a broader decline in hedging appetite.

A yen-based investor currently earns a 196 bp yield pickup on 10-year Treasuries — but a 0.5% loss after hedging costs.

For an interactive version of the below graphic, click here tmsnrt.rs/31u7eRl. 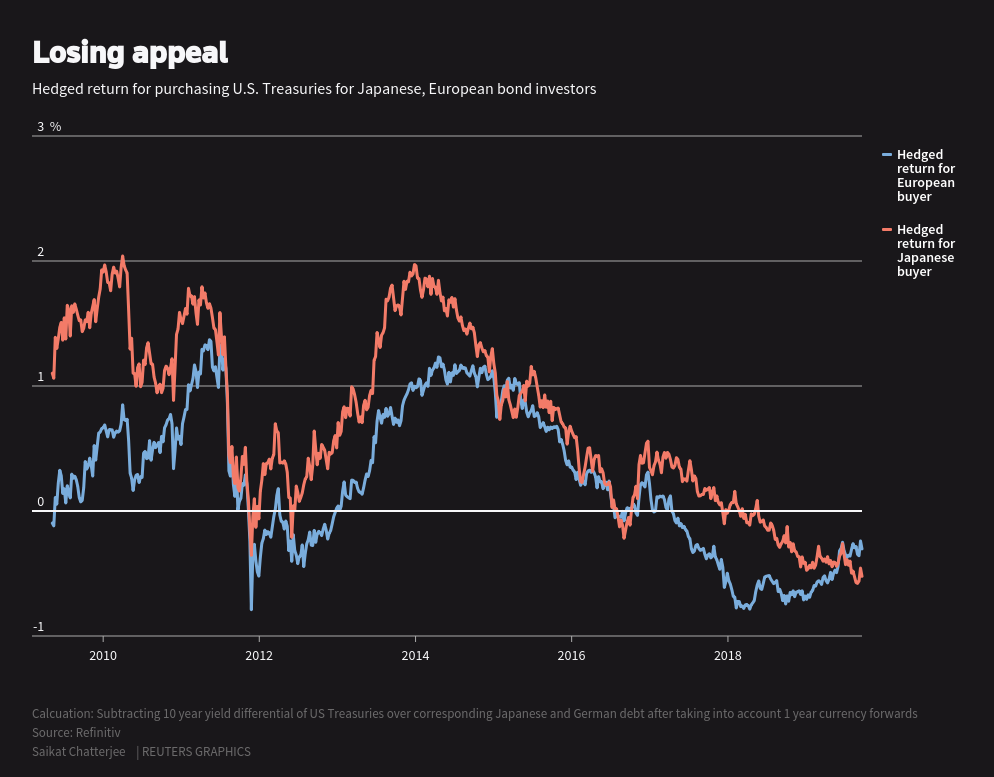 With little reliable data, investors often use exchange rate moves to draw conclusions on hedge ratios. Because hedging effectively offsets the purchase of an FX asset by selling the same currency in forward markets, a currency may strengthen more if it is not being sold for hedging purposes.

Dissaux said the U.S. dollar’s resilience in the face of interest rate cuts and slowing growth is partly due to investors not hedging their dollar exposure.

Tohru Sasaki, head of Japan rates and FX research at JPMorgan, says the dollar-yen exchange rate has a fairly stable correlation to the yield gap between 10-year Treasuries and Japanese government bonds.

“But in September the dollar has shifted about one yen above the usual correlation and it rose further in the last couple of weeks, which suggests unusual factors are driving up dollar/yen,” he added.

“Unhedged foreign bond buying by Japanese investors is the most likely culprit.”

For an interactive version of the below graphic, click here tmsnrt.rs/2ZZ4b6p. 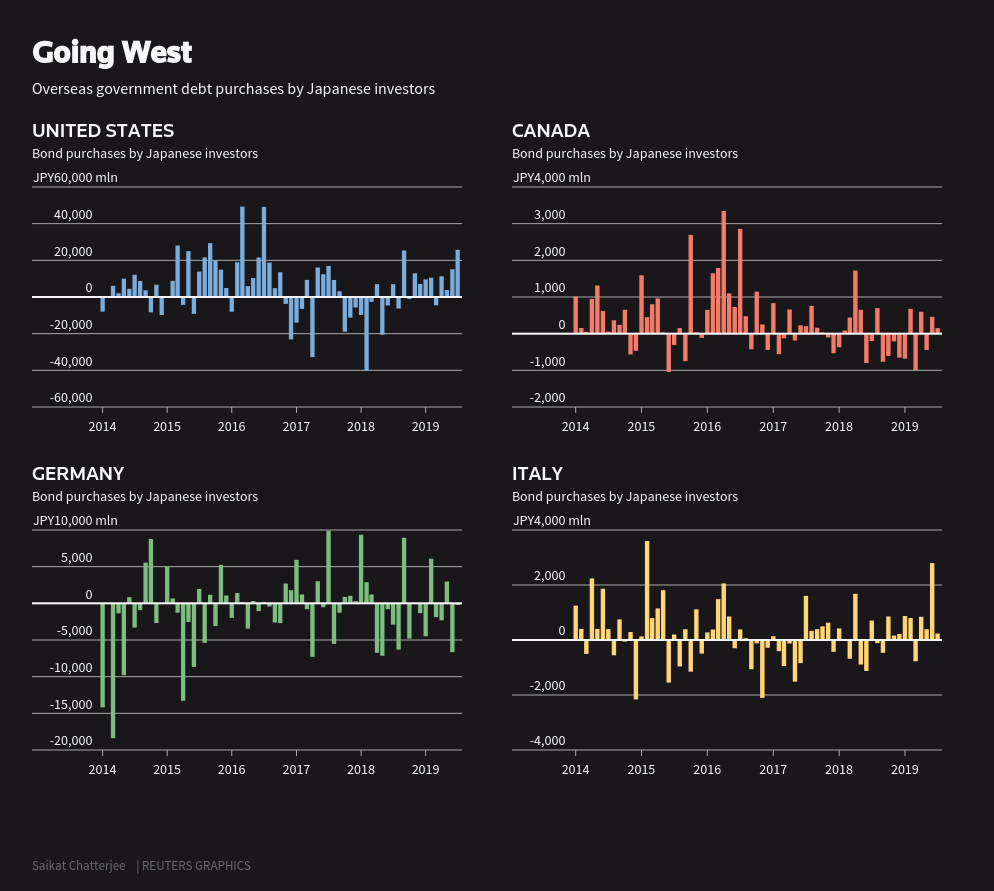 The shift is important because bond investors are a risk-averse bunch. Pension and insurance funds desire slim but steady returns — and holding bonds unhedged can jeopardize that.

FILE PHOTO: An employee of a foreign currency company walks past in front of a graph showing recent movements of the exchange rates between the Japanese yen and the U.S. dollar at a dealing room in Tokyo, Japan, August 6, 2019. REUTERS/Issei Kato/File Photo

When U.S. bonds yielded around 5% and the Treasury yield curve was steep, hedging costs ate less into returns.

But a flattening of the curve since 2016, so that long-maturity debt yields barely more than short-dated bonds, has crushed post-hedging yields, said Ugo Lancioni, managing director for global fixed income at Neuberger Berman. 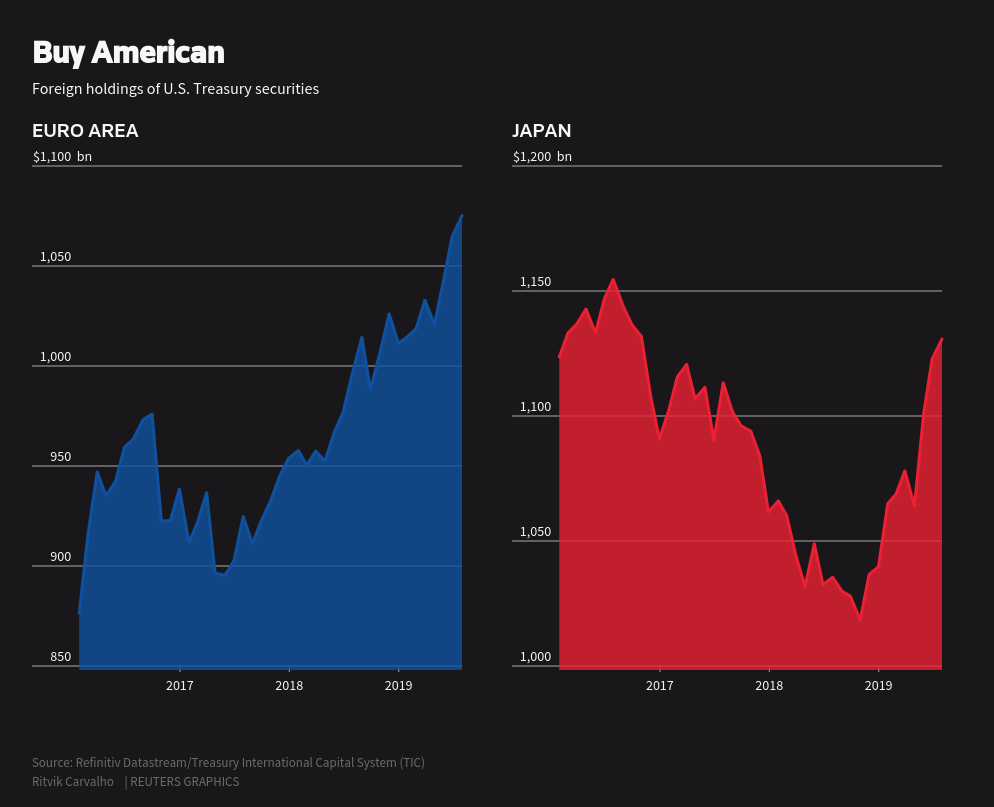 “(Curve flattening) has forced Japanese and other investors to buy bonds on an increasingly unhedged basis ... if you were to hedge your FX risk completely, what you earn on the long end you can lose by hedging on the short end,” Lancioni said.

Although it is unusual for hedging costs to eliminate the yield advantage of a foreign security, the gap between U.S. interest rates and those in Europe and Japan — on which the cost of forwards is based — mean no change is likely soon.

“The Fed has not pushed the button (on U.S. interest rates) and said we’re going to zero, like in Europe and Japan. So if you’re looking to take on dollar exposure, it’s probably still to your advantage to enjoy the full interest rate differential,” said Tim Horan, chief investment officer for fixed income at Chilton Trust in New York.

Some would call the strategy reckless. Dollar positioning, valuations and the low-volatility backdrop have reached extremes, meaning any reversal could be bloody. The dollar meanwhile faces headwinds from Fed rate cuts and President Donald Trump, who blames currency strength for U.S. trade woes.

“By leaving all of your global bonds unhedged, currency risk will dominate in your portfolio ... You may lose the integrity of a fixed income portfolio,” said Ben Popatlal, multi-asset strategist at Schroders.

Do clients usually know what currency risks they face? Popatlal said active managers tend to have discretion over portfolios, with clients kept informed of strategy shifts.

“Our neutral starting point is to be 100% hedged and then take active decisions away from that, such that every currency earns its place in the portfolio,” he added.

Additional reporting by Fergal Smith in TORONTO and Tom Westbrook in SINGAPORE; Writing by Sujata Rao; Editing by Catherine Evans