By Emmanuel Akinwotu and Dionne Searcey

LAGOS, Nigeria — Outrage mounted at government officials in Nigeria on Thursday over a deadly school building collapse and a shoddy rescue effort that followed.

At least eight people were killed when the three-story building that housed the Ohen Nursery and Primary School pancaked into the ground about 10 a.m. Wednesday. It had been marked for demolition months before it collapsed with dozens of people inside, some of them toddlers.

The authorities called off the frantic, daylong search for survivors early Thursday, after more than 35 people had been pulled from the slabs of concrete.

Officials at the Lagos State Emergency Management Agency said the last person, an adult male, was pulled from the debris at 3 a.m. They denied earlier reports that as many as 100 people had been in the building when it came down.

The structure was located on Lagos Island, an area of Africa’s largest city that is known for its poor urban planning. Many of the buildings there have been marked for demolition.

Although the building that housed the school was one of them, it was renovated about a year ago, and a coat of paint was added. Shops and a public restroom occupied parts of the ground floor, and the upper floors contained apartments. Residents had complained of low-quality construction.

On Thursday, people who live near the school expressed outrage at the rescue effort, complaining in particular that it took crews more than an hour to show up. Once the effort began, rescuers told of shortages of water and oxygen masks.

On Thursday, people who live near the collapsed school expressed outrage at the rescue effort, complaining in particular that it took crews more than an hour to show up.CreditSunday Alamba/Associated Press 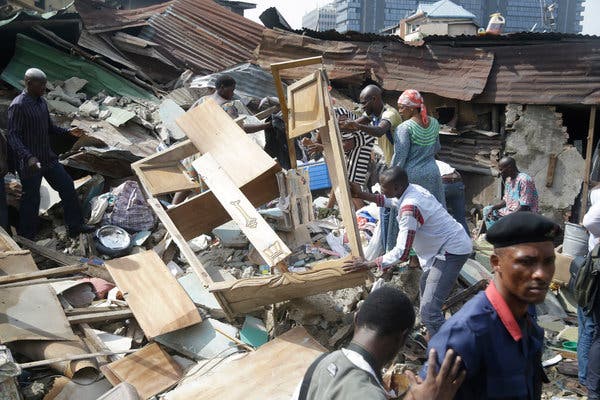 Local officials defended the effort, saying they left for the site as soon as they received a call about the collapse, at 10:06 a.m.

Neighbors, including so-called “area boys,” who are stereotyped as criminal gang members, dug through the rubble on Wednesday to rescue a pregnant woman and others before crews arrived. They stayed through the night, angry that officials could not provide them with even a flashlight.

“Beg the government that this cannot go on,” said Maryam Abdul-Quadri, 25, who lives nearby. “So many lives were just wasted yesterday.”

Residents said the government must act to save them from other unsafe buildings.

“We need to put an end to this act; if not, we and our families are in real danger,” said Oyindamola Oluwole, who lives in the area.

They point to unscrupulous builders who erect shoddy structures in crowded areas and pay off officials to look the other way.

“Lagos Island is a litany of buildings about to collapse or already collapsing,” the Socialist Party of Nigeria said in a statement. “The reality is that the agencies are more or less bureaucratic conduit pipe for collection of bribes and kickbacks from builders.”

The Human Rights Writers Association of Nigeria described the situation as “the height of criminal dereliction of duty” among Lagos state officials.

“The negligence that led to the incident should attract immediate prosecution for murder for all those officials,” the group said in a statement.

More than 35 people were reported rescued from the rubble.CreditTemilade Adelaja/Reuters 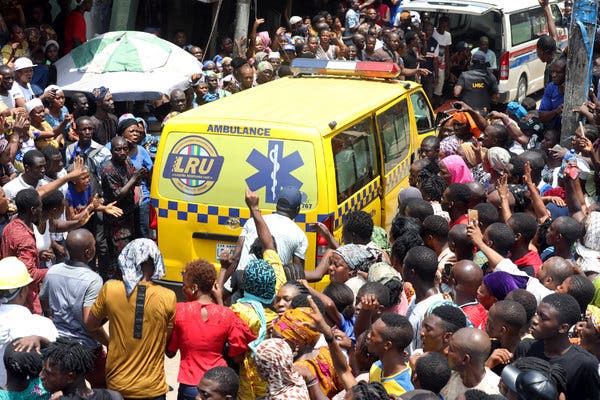 The group also called for audits of all public buildings, including shopping malls, stadiums and places of worship, noting other structures that have collapsed and killed people in past years.

“This particular case must never be swept under the carpets of impunity,” the group’s statement said.

The Lagos State Building Control Agency issued a public appeal on Thursday for residents not to break government seals on buildings marked for demolition.

Akinwunmi Ambode, the governor of Lagos State, has called for an investigation and said the school had been operating illegally in the building.

Residents were still processing the disaster on Thursday. A woman selling pastries sat on a stool crying into her hands as she put cups of dough into a pot of oil, telling anyone who would listen that a man named Kashim had died in the building after he went to his apartment for a quick nap.

“He was tired from the work he had been doing,” she said. “Now he’s gone. Look at the way the world is.”

Parents of children injured or missing remained Thursday at a nearby hospital. Some were waiting a second day for news of their children’s well-being.

One father left the hospital devastated after seeing the body of his son. Hospital officials had misidentified him, writing the wrong name on his hand, a final injustice for the man, who did not give his name.