The trade war between the U.S. and China has dragged on for more than a year, and it’s starting to turn into a brewing currency war, said analysts.

The yuan depreciated past 7 per dollar last week for the first time since the global financial crisis of 2008, which prompted the U.S. Treasury Department to designate China as a currency manipulator.

In a recent report, the Bank of America (BofA) Merrill Lynch Global Research predicts what might happen to the Chinese yuan in three scenarios.

Scenario 1: A full blown trade war — the yuan depreciates 10%.
Chinese imports from the U.S. are only a third of American imports from China, the bank pointed out. This means that China cannot match the U.S. tariffs in terms of quantity. However, one thing Beijing can do is to devalue the yuan by 10%, canceling off the impact of a 10% tariff on Chinese goods, BofA Merrill Lynch Global Research analysts said.

Scenario 2: A drawn out impasse — the yuan remains “unchanged.”

In this situation, the value of the yuan will go up but will be limited.

This is because “any deal is likely to include stipulation that would limit the room for any future RMB depreciation,” the bank explained. “If Beijing feels that the downside for the RMB is limited, it is likely to want to limit the upside for the RMB, especially if it thinks any RMB appreciation becomes difficult to reverse politically.” 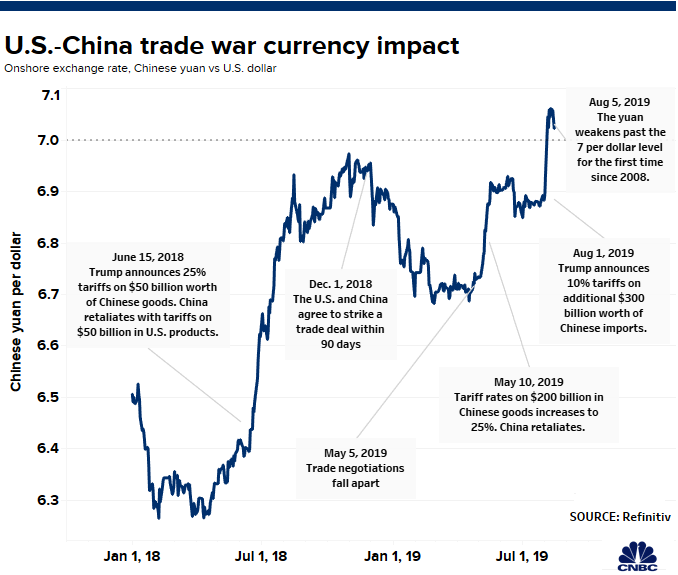 Weakness in the yuan “essentially puts the brakes on” other currencies in the region, including the Indian rupee, Singapore dollar, Korean won, Malaysian ringgit and Indonesian rupiah, said Jameel Ahmad, global head of currency strategy and market research at FXTM.

Amid the trade war, the Korean won looks likely to be among the biggest losers as it “has been the most preferred expression of deterioration in trade tensions,” wrote BofA Merrill Lynch Global Research analysts in a recent note.

South Korean trade is heavily dependent on China and the U.S., as the country is closely interlinked in the supply chains between the two giants. The won has also been hit by the dispute with Japan, which has spilled into trade between the two Asian neighbors.

The most resilient currency among emerging markets in Asia is the Thai baht, the BofA Merrill Lynch analysts wrote.

Despite attempts by Thailand’s central bank to weaken it, the baht has steadily strengthened — supported by the country’s large trade surplus, among other factors.

“From many perspectives it makes sense to prefer a cheap currency during uncertain times,” Ahmad told CNBC in an email. “There is a global downturn taking place, and demand for goods (or) services is at risk to weakness due to declining investment confidence, with this encouraging the preference to have a cheap currency to boost export competitiveness.”

A weaker currency makes a country’s exports cheaper, causing them to be more attractive in international markets.