International students will be allowed to stay in the UK for two years after graduation to find a job, under new proposals announced by the Home Office.

The move reverses a decision made in 2012 by then-Home Secretary Theresa May that forced overseas students to leave four months after finishing a degree.

Prime Minister Boris Johnson said the change would see students "unlock their potential" and begin careers in the UK.

But campaign group Migration Watch called it a "retrograde" step.

The change will apply to international students in the UK - there were around 450,000 last year - who start courses at undergraduate level or above from next year onwards.

They must be studying at an institution with a track record in upholding immigration checks.

Under the proposals, there is no restriction on the kinds of jobs students would have to seek and no cap on numbers.

"If one needed evidence of a new approach to immigration within government, today's announcement allowing all foreign students to stay for two years after graduation is just that," the BBC's home editor Mark Easton said.

"Where Theresa May introduced what she called a hostile environment around migration rules, with an ambition to reduce net migration to the tens of thousands, Boris Johnson has promised to scrap that target and encourage the "brightest and best" to come and live and work in 'global Britain'."

Chancellor Sajid Javid tweeted that the move was "about time", adding that the government "should have reversed this silly policy years ago".

Former universities minister Jo Johnson - who quit his brother's government last week - tweeted that it was "success at last" after being involved in the cross-party campaign. 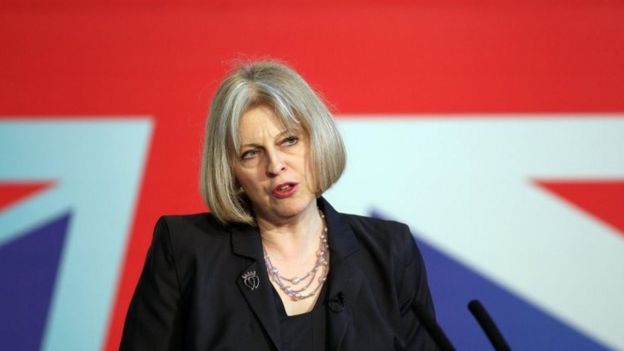 Alistair Jarvis, chief executive of Universities UK, welcomed the decision, saying it would benefit the UK economy and reinstate the UK as a "first choice study destination".

"Evidence shows that international students bring significant positive social outcomes to the UK as well as £26bn in economic contributions, but for too long the lack of post-study work opportunities in the UK has put us at a competitive disadvantage in attracting those students," he said.

But Alp Mehmet, chairman of Migration Watch UK, said the decision was an "unwise" step that would "likely lead to foreign graduates staying on to stack shelves".

"Our universities are attracting a record number of overseas students so there is no need to devalue a study visa by turning it into a backdoor route for working here," he added.

Shadow home secretary Diane Abbott said Labour has always said graduates should be able to work here after their studies.

"It enables them to contribute to our economy, our universities and to research, and helps us to attract the brightest and best from around the world.

"It is a great pity that ministers have previously supported measures that did the opposite."

The government's announcement coincides with the launch of a £200m genetics project at the UK Biobank, a charity and health resource that contains information and samples from 500,000 people.

The UK Biobank collected DNA samples and health questionnaire information from 500,000 British volunteers over several years and is now open to researchers from anywhere in the world who want to use those resources to develop new treatments for diseases.

The prime minister said projects of this kind wouldn't be possible "without being open to the brightest and the best from across the globe to study and work" in the UK.

Mr Johnson said: "That's why we're unveiling a new route for international students to unlock their potential and start their careers in the UK."

Britain had a "proud history" of being at the centre of international collaboration, he said, adding that it was "bringing together experts from around the globe to work in the UK on the world's largest genetics research project".