The groups are the latest to join Nigeria's lucrative kidnap for ransom industry, and are quite brazen in their operations.

In the last decade more than 8,000 people have been killed in the states of Kebbi, Sokoto, Niger and Zamfara, according to the International Crisis Group.

But recent attacks in the president's home state of Katsina, where more than 100 people were killed in attacks between April and June, have led to protests and calls for his resignation.

On two separate occasions the bandits targeted villagers who had received food handouts from the government during the coronavirus lockdown.

"They were about 200 on motorbikes, each bike rider carried a passenger and they all carried AK47 guns," Bashir Kadisau, an eyewitness, told the BBC.

He said he climbed to the top of a tree when he saw the large number of motorcycle riders coming into Kadisau village, and saw the attackers loot shops, steal cattle and grain, and shoot people who were fleeing.

The attacks are rooted in decades-long competition over resources between ethnic Fulani herders and farming communities.

The herders are mostly nomadic and can be found on major highways and streets across the country herding their cattle, but they have become involved in deadly clashes with farmers in Nigeria's north-western and central states.

This is because these areas have suffered massive deforestation, due to the impact of the Sahara Desert spreading south, causing arable farming land to disappear and water to become scarce.

"The persistent clashes led to the formation of armed self-help groups, called vigilantes, by both sides for protection," security analyst Kabiru Adamu told the BBC.

Armed groups within Fulani communities are being accused of resorting to criminality.

"The herders now see kidnapping and pillaging as more lucrative than the herding.

"The biggest cow would go for 200,000 naira but one kidnapping would fetch millions," Dr Adamu said.

The main Fulani cattle-breeders association, Miyetti Allah (Fulani for Thank You God), said they are the ones mostly affected by the activities of the bandits and that hundreds of their members have been kidnapped.

"Our cows have been rustled. The bandits are a bunch of criminals comprising all sorts of groups. We have lost 30% of cattle in Nigeria to different types of crises," Miyetti Allah's national secretary Baba Othman Ngelzarma told the BBC.

He said the attackers in Nigeria's north-west were "foreign herders from neighbouring countries". 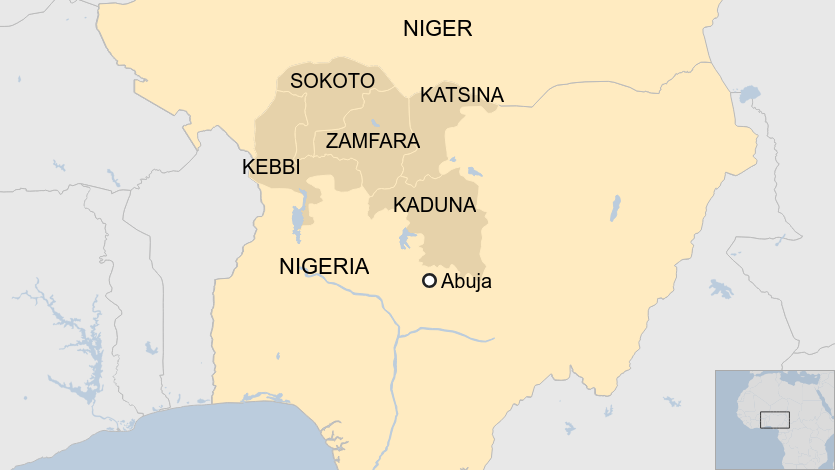 Nigeria's north-west, an area almost the size of the UK, borders Niger and criminal gangs criss-cross between the two countries, evading security.

The borders are porous and the vast forest reserves in the border regions have been turned into operational bases for the bandits.

Police say the attacks in the north-west are being carried out by criminal gangs, as well as Fulani herdsmen.

"The Fulani herders suddenly realised that they now have arms to protect themselves. But they are not just protecting themselves, they are also going after those who wronged them in the past," Isah Gambo, police spokesman in Katsina state, told the BBC.

Kidnapping for ransom is widespread in Nigeria, with victims forced to pay between $20 and $200,000 for their freedom.

At its height in 2017 and 2018, the major road connecting the capital Abuja in central Nigeria to Kaduna in the north-west had 10 kidnappings per day with 20 different groups operating on the route, the police head of a special unit fighting kidnappers, Abba Kyari, told the BBC.

The governor of Katsina state, Aminu Bello Masari, went into the forest hideout of the bandits last year, negotiating a deal that would see them escape prosecution in exchange for stopping the attacks.

But he caused shock among many Nigerians when he appeared in a photo standing next to a bandit wielding an AK-47 rifle.

Businessman Nasif Ahmad, who had been kidnapped in Katsina only days before, condemned the governor for making the deal.

"How can a state government go into a deal with bandits who have no education, have no sympathy or faith and behave like animals," he said.

Mr Ahmad said he fought off the bandits after they abducted him, and spent the night in the forest.

"I felt very, very bad when I heard about the governor going into a deal with them," he told the BBC.

The governor said at the time that the talks were aimed at ending the "incessant wanton destruction of lives and property", and were yielding positive results.

But last month, Mr Masari told journalists that the peace deal was off because of continuing attacks.

"These bandits come to town, spray bullets, kill indiscriminately for no purpose and no reason whatsoever. How can a human being behave the way an animal cannot behave?" he asked.

Last month's street protests in Katsina saw angry protesters burn down an old campaign billboard of President Muhammadu Buhari, the clearest indication yet that people in his home state had run out of patience.

But in his time, a deadly Islamic insurgency has continued to rage in the north-east, while criminal activities, along with the farmer-herder clashes, appear to have escalated in the north-west and central states.

Nigeria's military is currently carrying out an operation on the orders of the president to "sweep bandits and kidnappers" out of his home state.

Mr Buhari has also attempted to solve the underlying reasons for the conflict by proposing grazing reserves for the herders.

But in a country divided along ethnic lines, many powerful state governors refused to buy into the project, accusing the president, a Fulani, of hatching a plan to seize land for his ethnic group.

It is increasingly clear that the lines between the farmer-herder clashes and banditry are becoming more blurred in the north-west, and as the Katsina state governor learned, bandits do not keep their word.