BY   Suban Abdulla and LaToya Harding

Kwasi Kwarteng has become the new chancellor of the exchequer for the United Kingdom as Liz Truss announced her new Cabinet hours after becoming prime minister on Tuesday.

A loyal Truss ally, the 47-year old politician, who served as secretary of state for business, energy and industrial strategy under the Johnson government, is the first Black finance minister to be appointed in Britain.

He has been a Conservative MP for Spelthorne since 2010, and in January 2021 became the first Black secretary of state.

Truss replaced Boris Johnson as party leader and prime minister after beating former chancellor Rishi Sunak after months of campaigning for the top job in politics.

Read more: New PM's term in office to be marked by deepest living standards squeeze in a century

Kwasi Kwarteng's economic ideology resonates deeply with fellow free marketeer Truss’s. He was favourite to be her chancellor as she won the race to become the UK's next PM.

His appointment is the first return of an amicable relationship between a PM and chancellor since David Cameron and George Osbourne.

With inflation running at a 40-year high and the Bank of England predicting a recession by the end of the year, a daunting task awaits the next occupant of Number 11. So who exactly is Kwasi Kwarteng, and can he tackle the worst economic crisis since the 1970s?

Like many politicians before him, Kwarteng attended Eton College, and then went on to read classics and history at Trinity College at Cambridge University.

Born to Ghanian parents, he later attended Harvard University on a Kennedy Scholarship, and completed a PhD in Economic History at Cambridge in 2000.

Read more: What is stagflation and can it lead to a recession?

Before becoming a member of parliament, the Waltham-Forest born father-of-one was a columnist for The Daily Telegraph newspaper, as well as a financial analyst at JPMorgan Chase (JPM) and other investment banks.

Kwarteng is also a published author, writing a book, Ghosts of Empire, about the legacy of the British Empire, in 2011. He also co-authored Gridlock Nation with Jonathan Dupont in the same year, about the causes of and solutions to traffic congestion in Britain.

In 2012, he co-authored Britannia Unchained — a book which questioned the work ethic of Britons, made the case for a low-tax, low-regulation UK economy achieved in part by reducing the size of government — with several Tory MPs including Truss, Dominic Raab and home secretary Priti Patel. 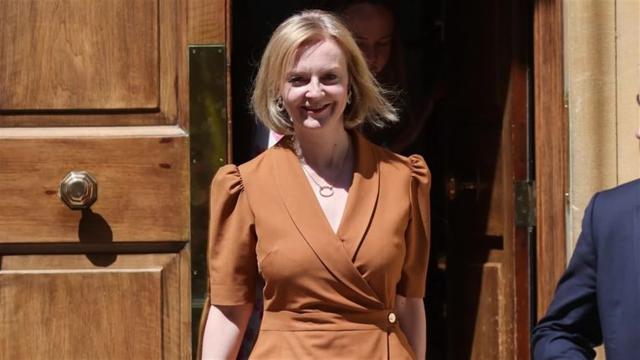 Over the years, Kwarteng has steadily risen through the ranks of the Conservative party.

A long-time ally of Truss, the pair were both born in 1975, belong to the same parliamentary intake, 2010, and live near each other in Greenwich, London.

Kwarteng, also shares Truss's scepticism of windfall tax on energy companies and believes the key to solving the cost of living crisis is by stimulating economic growth through low taxation.

He was first elected to office in January 2010 as MP for Spelthorne, taking over from Conservative MP David Wilshire with 22,261 votes. He was re-elected to the seat at the 2015 general election with an increased majority of 24,386 votes.

The business secretary used his maiden speech in parliament to criticise the former Labour government led by Gordon Brown as well as the 2008 financial crash.

"I find it staggering that Labour members have not had the good grace to come to the House to apologise and to show some recognition of the very real problems that we face and the solutions that we need to get out of this situation," he said.

In October 2016 Kwarteng joined the Public Accounts Committee, staying there until May 2017.

He became parliamentary private secretary (PPS) to the leader of the House of Lords in 2015, and in 2017 he became PPS to the chancellor of the exchequer.

Between November 2018 and July 2019 he was parliamentary under secretary of state in the Department for Exiting the European Union, before being appointed to the Cabinet as business secretary in 2021.

Why are gas prices rising?

Gas prices are rising due to low gas reserves, strong commodity and carbon prices, heightened global demand, and low wind output. The UK has been hit relatively hard because around 85% of homes have gas central heating, and gas generates a third of the country's electricity. We saw a particularly cold winter in Europe last year which put pressure on supplies and reduced the amount of gas stored. There was also a relatively windless summer in 2021, which made it difficult to generate wind energy.

In the 2016 EU referendum, Kwarteng voted for Leave, and voted against the right to remain for EU nationals already living in the UK.

He backed Johnson in the 2019 Conservative party leadership election. He also threw his weight behind Johnson in the no-confidence vote in June, saying he "got the big calls right".

Often dubbed a right-wing Thatcherite, he's a staunch believer in low taxation, and has consistently voted for reducing the rate of corporation tax.

Tackling the cost of living crisis will be a major challenge for the next chancellor, but Kwarteng has so far argued firmly against a windfall levy on energy firms — even after Sunak introduced one — as average household energy bills are forecast to reach £3,600 next year.

However, writing in the Mail on Sunday last month, he said he wanted to "reassure the British people that help is coming", claiming that the government was "working on options for the new prime minister".

He also voted against spending public money on creating guaranteed jobs for young people in long-term unemployment, as well as against paying higher benefits over a longer period of time for those who are unable to work due to illness or disability.

On environmental issues, Kwarteng has a mixed record. He sometimes voted in favour of initiatives to tackle climate change, and reportedly blamed the free market for global warming, at other times he expressed views in favour of expanding the UK's offshore gas and oil industry. He has also consistently voted for high speed rail infrastructure

This content is not available due to your privacy preferences. Update your settings here to see it.

When it comes to home affairs, Kwarteng has backed a stricter asylum system and tougher enforcement of immigration rules, voting in favour of the nationality and borders bill, which became law in April.

He has also backed mass surveillance of people's communications and activities, as well as retention of information about communications.