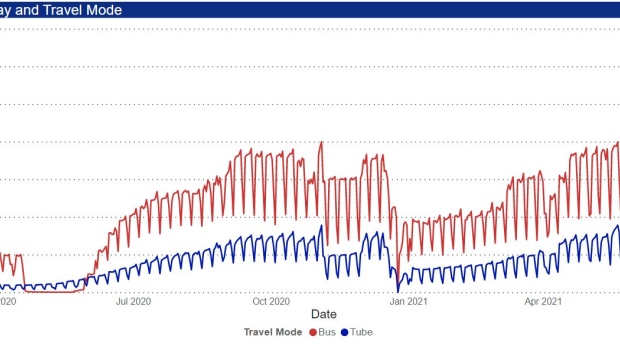 (Bloomberg) -- London’s underground rail system had its busiest morning since March 2020 as office workers returned to their desks and schools reopened.

Some 831,000 people used the Tube network from 7-10 a.m. on Monday, an increase of 17% from the previous week, Transport for London said in an emailed statement. Bus traffic jumped 39%, with London’s schools returning after the summer holidays. Monday’s figures were compared with Tuesday, Aug. 31, because Aug. 30 was a public holiday.

While ridership remains far below pre-pandemic levels, the pick-up in traffic suggests a much-delayed return to the office may finally be taking hold. TfL, which runs London’s Tube and bus network, has received more than 4 billion pounds ($5.5 billion) in government bailouts since the Covid-19 pandemic gutted tourism revenue and forced commuters to work from home.

In an email, a TfL spokesman said he expected to finish the day with more than 50% of pre-pandemic Tube ridership, and at least two-thirds of normalized bus usage. The network was moving some 5 million people around London per day before the