BY   Jonathan Wilson in Cairo 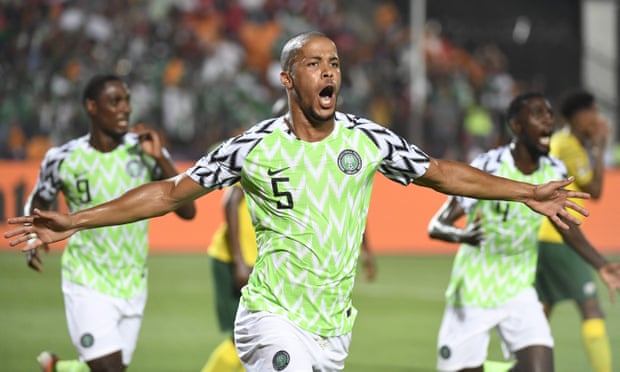 Nigeria are in the semi-finals of the Cup of Nations. A week come Friday, they could win the trophy for the second time in six years which, given they had won it only twice in the first 55 years of its existence, would be in some bluntly statistical way the most successful period in their history. Yet nobody can seriously believe this Nigeria side to be anywhere near the stature of some of their sides of the past. Nigeria’s record of underachievement in the Cup of Nations always seemed slightly freakish; it may be that this current spell of achievement comes to seem equally weird.

That’s not to say that Nigeria don’t deserve to be in the semi-finals, where they face Ivory Coast or Algeria. After a lackadaisical defeat by Madagascar in the final group game, when qualification had been secured – only their second defeat by African opposition in three years under Gernot Rohr – they have come through dramatic ties against Cameroon and South Africa.

“They go down but they come back in the last minutes – it’s fantastic,” Rohr said after the quarter-final victory on Wednesday. “The attitude of the players is wonderful.”

He was in giddily high spirits, attempting to initiate some arch coaching banter about the relative merits of zonal- and man-marking at set plays after both sides had leaked soft goals from corners, only to find Stuart Baxter, South Africa’s robustly Wulfrunian coach, who thanks to CAF’s policy of dual press conferences was seated alongside him, unwilling to engage.

But the qualities of this Nigeria are spirit and, for the most part, organisation. They are not the high-class artists of a couple of decades ago. There are no players with the individual qualities of Sunday Oliseh, Jay-Jay Okocha and Nwankwo Kanu. The highest-profile player remains Mikel John Obi, who has been restricted to a supporting role, starting against Burundi and Madagascar but left out of the other three matches, although he delivered a stern team talk amid the celebrations that followed the 3-2 win over Cameroon. There could yet be a glorious finale to his international career in the country where he made his Nigeria debut in the 2006 Cup of Nations.

In that sense, Nigeria reflect a wider trend in the development of African football. The best teams are nowhere near the quality they were 10-20 years ago: there is no side to match the Cameroon of Geremi, Rigobert Song and Patrick Mbomba or the Egypt of Ahmed Hassan, Hosny Abd Rabo and Mohamed Aboutrika. The Nigeria, Senegal and Ivory Coast sides of the early part of the century, you suspect, would have been far more successful had they come along 15 years later. But equally the minnows are far better than they used to be. That teams such as Burkina Faso, Cape Verde and Gabon have failed to qualify suggests significant strength in depth. 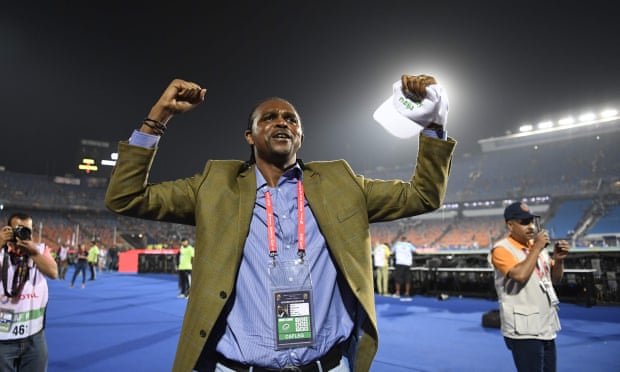 Nwankwo Kanu celebrates Nigeria’s quarter-final win. There is no player with his individual quality in this year’s team. Photograph: Khaled Desouki/AFP/Getty Images

It may not be the sort of progress that would offer the easy headline of an African side reaching a World Cup semi-final but it is progress nonetheless. The truth is that there isn’t a huge difference in quality between, say, the third-best team in the confederation and the 30th-best, the result of which is that where Cameroon and Egypt won five of the six Cups of Nations played between 2000 and 2010, the tournament has become a crap shoot, rather higher on drama and upsets than on quality.

That in turn has meant the oddity of Nigeria’s situation. It may soon get even odder. Nigeria won the Under-17 World Cup in 2013 and 2015. Players such as Kelechi Iheanacho, Isaac Success and Musa Mohammed, who played in the earlier triumph, have begun to establish themselves in the senior game. There is a sense now of Nigeria being between generations; this, after all, is a side that failed to qualify for three of the previous four Cups of Nations.

Rohr’s side’s greatest strength, perhaps, is an awareness of their limitations. Ahmed Musa had repeatedly got in behind the South Africa right-back Thamsanqa Mkhize but it was Alex Iwobi’s cross from that position that led to Samuel Chukwueze, an exciting right-sided forward who was part of the 2015 Under-17 World Cup-winning side, opening the scoring.

The Fiver: sign up and get our daily football email.

They then sat back, allowing South Africa the ball, denying them the space to counter as they had so effectively in eliminating Egypt in the last 16, and seemed set to grind it out when Bongani Zungu was rendered onside by a touch from Odion Ighalo and levelled. But as against Cameroon, when they leaked two goals in three minutes just before half-time, when a brief lapse looked like being their undoing they managed to reverse the momentum. As South Africa suddenly began to play with self-confidence, Nigeria resisted and then, thanks to a horrible misjudgment from the goalkeeper Ronwen Williams, found a winner.

Nigeria for a long time were a team that played in brilliant flurries but kept falling short in semi-finals. The current side are far less talented and far less consistent and yet they may somehow end up doubling Nigeria’s tally of success in the Cup of Nations in the space of six years.