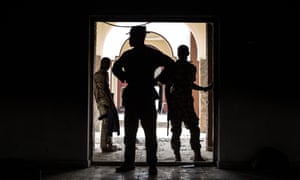 The Nigerian military arrested thousands of children it suspected of involvement with Boko Haram, holding them in squalid conditions for years in some cases, according to a new report.

Some of the children detained were as young as five, and others described being crammed into overwhelmingly hot, crowded cells in a notorious military facility in the north-eastern city of Maiduguri called Giwa barracks, said a report released by Human Rights Watch.

The allegations, which the Nigerian military denies, fit into a wider pattern of alleged abuses on the part of the country’s security forces, which have been battling the extremist group Boko Haram for more than a decade.

Thousands of women and girls who believed they were being rescued were allegedly abused in exchange for food and other basics. In 2015, Amnesty International said at least 7,000 people had died in military detention in the north-east. More recently, thousands of displaced people have been sent back to unsafe areas to provide a bulwark against Boko Haram, according to officials in Borno.

More than 3,600 children, including 1,617 girls, were detained by the Nigerian armed forces between 2013 and 2019, according to data collected by the UN, though Human Rights Watch said Nigerian authorities have not allowed the UN access to military detention sites to verify these figures. It is not known how many children are currently in detention.

Before arriving in Giwa barracks, several children described beatings at the hands of security forces, the report said.

Ten-year-old Ibrahim said his family had fled their village after an attack by Boko Haram when he was five and had been arrested several days later by the military.

“We said we escaped from Boko Haram, but the military did not believe us,” he said. “They said that we were part of Boko Haram. They hit us children with a rope of animal skin and slapped our parents with the flat end of a long knife. They beat us every day.”

Saeed, 17, who was initially detained in the town of Banki, said he was beaten by the Civilian Joint Task Force, a vigilante group working with the military, in the presence of soldiers.

“They asked me if I was a member of Boko Haram and beat me up when I said no. They tied my hands and legs and hung me to a tree and continued to flog me. They flogged me and left me tied to the tree from morning till evening … They shot some people and even beat others to death with sticks.”

Once they arrived at the barracks, children said they had to sleep close “like razor blades in a pack”, with up to 300 people in a cell, sharing one toilet. Almost half the children who were spoken to said they had seen the dead bodies of other detainees, who some thought had died because of the heat.

A spokesman for Nigeria’s defence headquarters said the military did arrest children attempting to detonate explosives and “provide tacit support to insurgents”, including information on troop movements, but that children were treated as “victims of war and not as suspects”.

“Apprehended children are kept in secured places, where they are adequately fed, profiled and de-radicalised before their release,” said Onyema Nwachukwu.