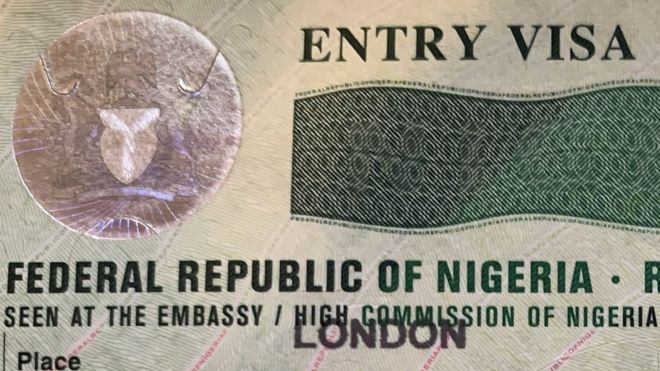 The owner of the Nigerian government-appointed company which produces visas for people wishing to travel to Nigeria from around the world is facing charges of fraud and money laundering in Nigeria in relation to a different company, the BBC has learnt in a joint investigation with the Premium Times.

There is no suggestion of wrongdoing by the visa-processing company and the allegations have no relation to the management of the visa business.

Mahmood Ahmadu, together with his former company Drexel Tech, was charged by the Economic and Financial Crimes Commission (EFCC), on two counts of fraud and three counts of money laundering.

All those charged, including Mr Moro and Mr Ahmadu, deny any wrongdoing.

Mr Ahmadu has been highly regarded in Nigeria and was given the Order Of The Niger, a prestigious national award, by President Goodluck Jonathan in 2014.

His lawyers say at no time did the EFCC or any other authority in Nigeria or elsewhere declare him "wanted". They say he is not standing trial. He maintains his innocence and his lawyers deny that he is facing charges.

But the EFCC charge sheet alleges that Mr Ahmadu, together with other defendants, was involved in organising a recruitment exercise that led to the deaths of Nigerians. 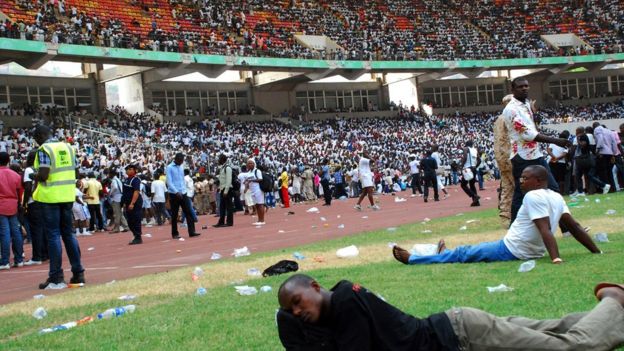 Image captionJobseekers were crushed in a stampede

Mr Ahmadu's former company, Drexel Tech, was engaged in 2013 to organise a recruitment drive supposedly for 4,000 vacancies in the Nigerian Immigration Service (NIS).

When dates for a recruitment exercise were set, several people died during a stampede as thousands of jobseekers scrambled into the Abuja National Stadiumto take part in the exercise allegedly organised by the Interior Ministry.

"I was surprised about the recruitment exercise because I was not aware of it," then NIS Controller General, David Paradang, later told the Federal High Court in Abuja.

The EFCC has said that Mr Ahmadu, who the charge sheet describes as "at large", and the co-accused, made a total of 677m naira (£1.4m; $1.6m) from the recruitment exercise. 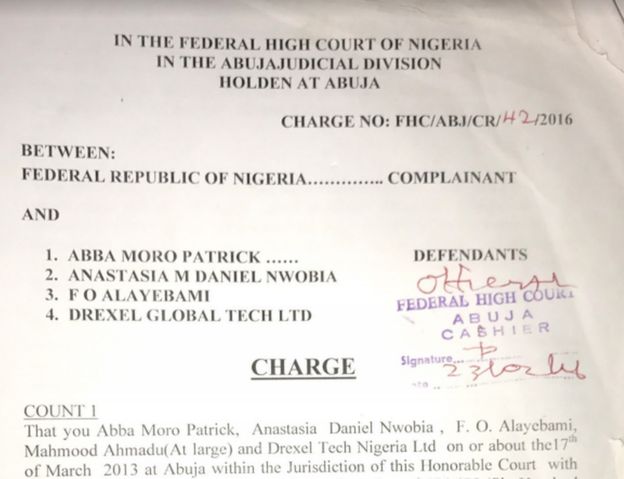 The charge sheet alleges that Mr Ahmadu and Drexel Tech Nigeria Ltd spent part of the money to purchase property in Abuja while just over 100 million naira, it is claimed, was converted to dollars for the personal use of Mr Ahmadu and the company.

While all the other co-accused, including Mr Moro, presented themselves for questioning and are currently standing trial, the EFCC says that Mr Ahmadu did not come forward to talk about his alleged role in the recruitment exercise.

Back in 2016, then spokesperson of the EFCC, Wilson Uwujiaren, told the Nation newspaper: "We may enlist Interpol and relevant agencies in the UK to track down Mahmood Ahmadu. He used to have companies in the UK and with his biometrics, there is no hiding place for him. We have already watch-listed him."

Last week, the EFCC's current spokesperson, Tony Orilade, told the BBC that there is still a case against Mr Ahmadu.

"The charge sheet reads that he is at large. The position of the EFCC is clear: the proceeds of the recruitment remains illegal...

"The EFCC is aware he is hiding in Europe. He has not been seen since arraignment."

The company prides itself as "a specialist Nigerian visa and passport application agency" in partnership with diplomatic missions across the world to "expedite hitch-free travel" to global destinations. The company makes millions of dollars every year.

The BBC made numerous attempts to contact Nigerian Interior Ministry and the country's High Commission in London. They did not offer any response.

The BBC contacted the UK's Home Office and the Foreign Office who were not prepared to comment on the case.

The UK's Department for Business, Energy and Industrial Strategy said that "a foreigner charged with a crime abroad can still set up a company and run it in the UK, if no arrest warrant has been issued".