NEW YORK (Reuters) - Oil prices rose on Tuesday after China signaled progress in trade talks with the United States and OPEC and its allies mulled deeper production cuts, but gains were capped by forecasts of a buildup in U.S. crude stockpiles.

OPEC and its allies plan to consider whether to deepen cuts to crude supply when they next meet in December due to worries about weak demand growth in 2020, sources from the oil-producing club said.

Traders said the possible supply cut pushed prices higher, but gains were muted as the market contended with concerns about demand.

Washington and Beijing have made progress in trade talks, China’s Vice Foreign Minister Le Yucheng said, and problems can be resolved as long as both sides respect each other.

“While the encouraging mood across financial markets will remain stimulated by trade optimism, risk aversion could still make an abrupt return should talks drag on or turn sour,” said Lukman Otunuga, analyst at FXTM.

The International Monetary Fund last week forecast that fallout from the U.S.-China trade war and trade disputes across the world would slow global growth in 2019 to 3.0%, the weakest in a decade.

For a graphic on Purchasing managers’ indexes, manufacturing: 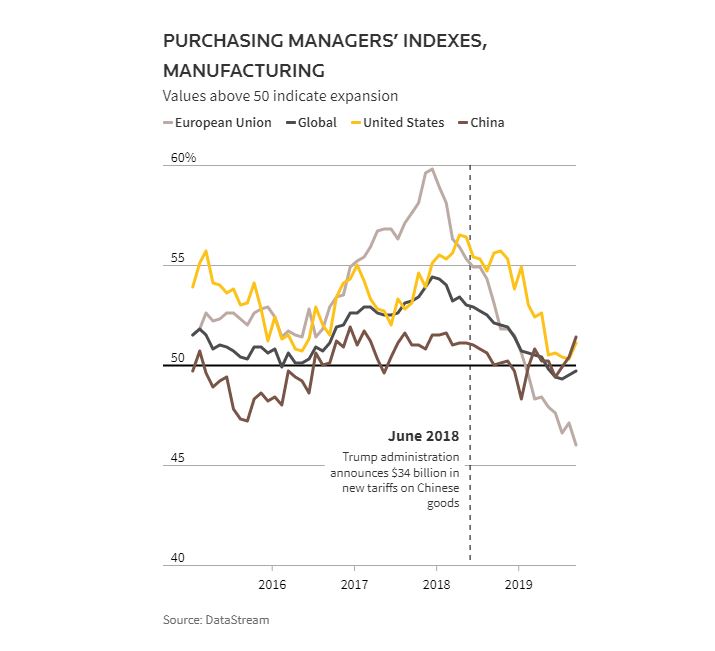 Inventory data from the U.S. Energy Information Administration (EIA) is expected on Wednesday.

“Expectations that the API and EIA will report that U.S. crude oil inventories increased by around 3 million barrels over the last week certainly do not help sentiment,” ING analyst Warren Patterson said.

“These more visible stock builds, along with demand concerns continuing to linger, suggest it is becoming increasingly more difficult to see a sustained rally in prices ahead of the OPEC+ meeting in early December.”

The Organization of the Petroleum Exporting Countries, Russia and other oil producers, an alliance known as OPEC+, have pledged to cut production by 1.2 million barrels per day (bpd) until March 2020. The producers meet again on Dec. 5-6.

Russian Energy Minister Alexander Novak said U.S. oil production is likely to peak in the next few years as current oil prices are capping the pace of expansion.

The brisk pace of U.S. production, now the world’s highest, in the past few years has been a key factor behind the relative weakness in oil prices. However, output has slowed recently.