Three days of falling oil prices is not a crisis for OPEC, the weakening oil producer’s club, but forecasts of a continuation of the price decline could sap what strength remains in an organization once able to dictate the direction of the global economy.

A series of reports released over the past few days threw fresh light on the existential crisis confronting the Organization of Petroleum Exporting Countries which has been explored here before (Opec Is Not Dead Yet, But It Has Lost Control Of The Oil Market, July 2). 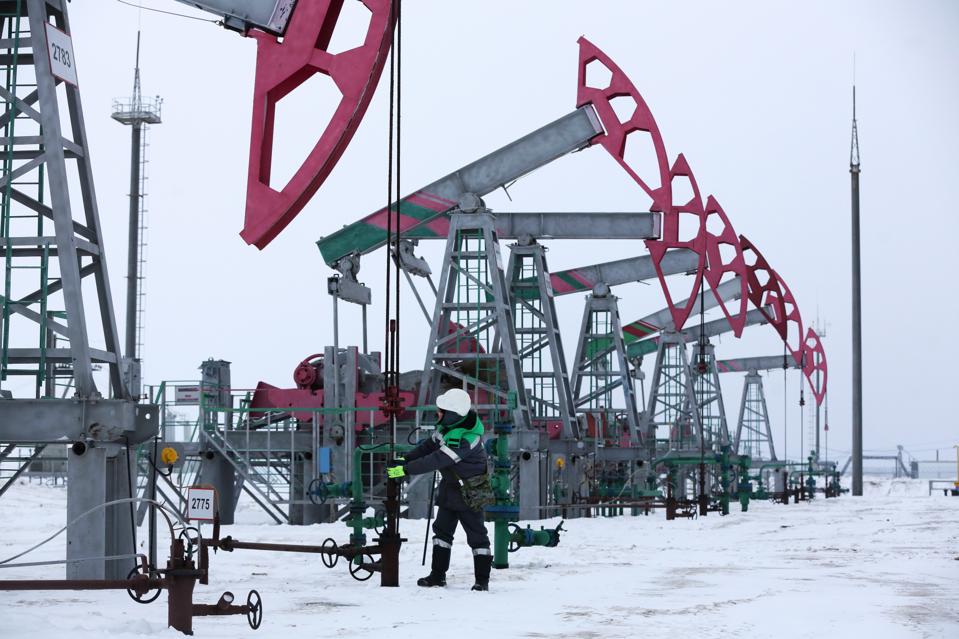 A worker makes adjustments to an oil pumping jack, also known as a nodding donkey, in the Bashneft PAO oilfield outside the village of Nikolo-Beryozovka near Neftekamsk, Russia, on Thursday, March 3, 2016. Bashneft is an upstream and down stream oil

The most alarming comments for members of Opec, especially the cartel leader, Saudi Arabia, came yesterday from the International Energy Agency in its monthly Market Report which warned of a growing oil surplus which will get worse next year.

“While the relentless stock builds we have seen since early 2018 have halted, this is temporary,” the IEA said.

“Soon, the Opec+ producers (Opec and Russia) will once again see surging non-Opec oil production with the implied market balance returning to a significant surplus placing pressure on prices.

“The challenge of market management remains a daunting one well into 2020.”

By market management the IEA means production cuts by members of the club, especially Saudi Arabia.

Cuts, however, will not be easy or welcomed by the Saudis who are finalizing the listing of their national oil champion, Saudi Aramco, on the Tadawul (Saudi Stock Exchange).

Oil prices around their current level are already testing the finances of most Opec members who need a price close to $70 a barrel just to balance their budgets.

But to get back to $70/bbl from the current $55/bbl one of two things needs to happen. Either there is a surge in demand, which is unlikely, or a meaningful cut in supply from Opec members who are already under financial pressure.

That means the burden of production cuts falls on Opec members, an unwelcome possibility as most are already being squeezed by the last round of cuts which might have helped stabilize the oil price, but did not deliver the price boost hoped for.

The oil-glut problem of today, with more to come next year according to the IEA, can be attributed to a number of factors such as slower global economic growth, rising non-OPEC production (particularly by the U.S.), and the surge in the production of natural gas in its pipeline and liquefied form (LNG).

McKinsey & Company, a management consulting firm, explained the growing importance of LNG in the energy market earlier this week in its Global Gas And LNG Outlook To 2035.

The key findings were that gas would be the only fossil fuel to grow continuously to 2035 and that the major contributor to that growth would be the U.S.

The rush into gas is largely explained by the fuel being significantly less polluting than oil or coal but the liquefaction and transport technologies which have unleashed gas have only just started to influence the global energy market and while many Opec members are LNG producers it is non-members such as Australia and the U.S. which are driving the industry.

McKinsey’s view of the LNG sector could be underestimating the impact of the fuel because there are many more potential projects on the sidelines with the capacity to create a gas glut which would bear down on prices for both gas and oil.

One paragraph in the McKinsey report demonstrates the emerging power of LNG in the global energy market. It reads:

With potential supply close to 9-times bigger than the forecast in demand growth it is likely that many of the proposed LNG projects will not proceed, but its also possible that too many will be developed, crowding the market and killing the LNG price.

In other words, not only is there an oil glut today but there’s the possibility of a gas glut tomorrow, which is very much not something Opec members want to hear about.