LONDON (Reuters) - Sterling hit a seven-month high against the dollar and a 2-1/2 year peak versus the euro on Monday after fresh polls showed British Prime Minister Boris Johnson’s Conservative Party has extended its lead in opinion polls before Thursday’s election.

The ruling Conservatives extended their lead over the main opposition Labour Party to 14 percentage points, up from 9 percentage points a week ago, an opinion poll by Survation for ITV’s Good Morning Britain showed on Monday.

The British currency rose as speculators reduced their net short positions on the pound to $2.44 billion in the week to Dec. 3, more than halving the shorts since their peak of $7.81 billion this year. GBPNETUSED=

Traders have become less worried as implied volatility gauges for one week have fallen to their lowest in nearly two years, with investors, like UBS Wealth Management, offloading protection against unexpected moves in the pound, pushing the price for options lower. GBPSW= 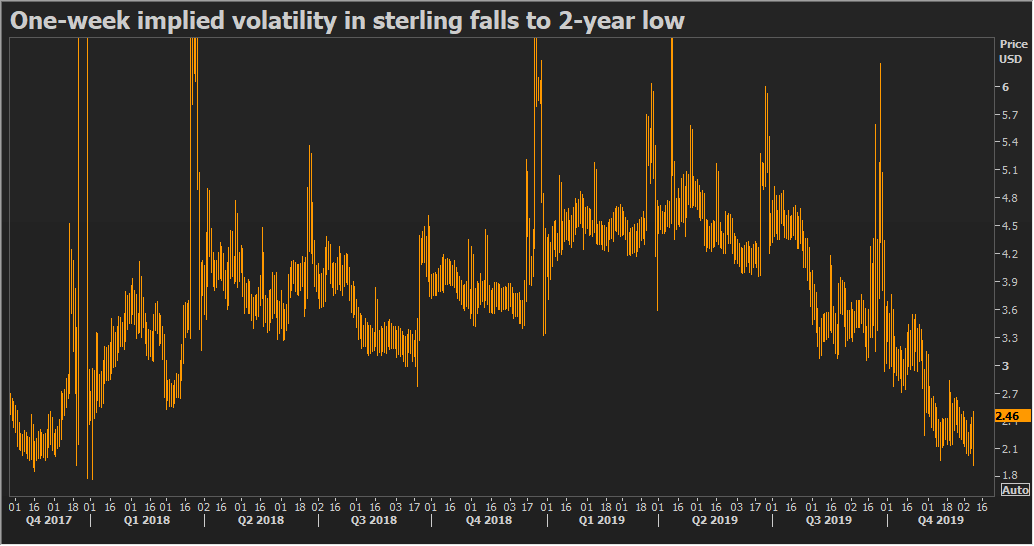 The expectations that the Conservatives will win an outright majority has boosted the pound in recent days as investors see this leading to parliament approving a Brexit deal Johnson has secured with the EU, ending three-and-a-half years of political paralysis.

But future sterling gains are likely to be limited, given that Britain will have to negotiate a new trade deal with the European Union after formally exiting the bloc on Jan. 31. The time allocated for this is less than a year, which analysts say is an impossible task.

“Sterling can get to $1.34/$1.35 if there is a Conservative victory, then its appreciation will be capped by what the Conservatives have pledged in terms of the spending offered and renewed Brexit uncertainty,” said Jordan Rochester, Nomura’s currency strategist.

British officials have also questioned whether Johnson’s claim that Britain will make a clean break with the EU in December 2020 can be achieved, fearing that a new customs arrangement for Northern Ireland may not be ready in time, the Financial Times reported.

“Once the initial euphoria fades over a positive UK election outcome, it will become more challenging for the pound to extend its advance in 2020,” he said.