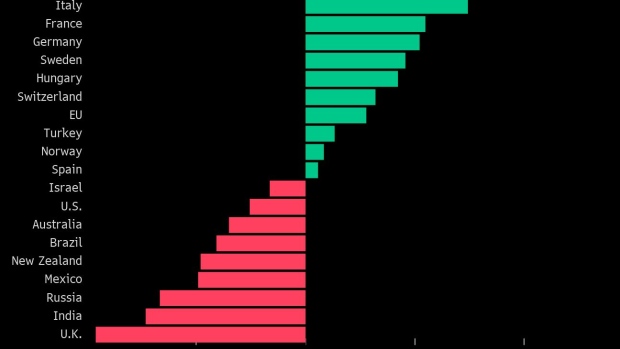 British twenty, ten, and five pound notes sit in this arranged photograph in Danbury, U.K., on Monday, March 23, 2020. The pound rose, boosted by broad dollar weakness, after the U.K. government banned all unnecessary movement of people for at least three weeks in order to reduce the spread of coronavirus. Photographer: Chris Ratcliffe/Bloomberg , Bloomberg

(Bloomberg) -- Investors bullish on the U.K. pound have gotten used to brushing off concerns about Covid-19 infections and the post-Brexit future. Now, a sudden rethink on the global recovery is bringing those worries back into focus.

Sterling is on course for its first back-to-back monthly declines versus the dollar since March 2020 -- when the coronavirus became a pandemic and spurred turbulence in markets worldwide -- and only its second month of losses versus the euro in almost a year.

Investors are tempering their optimism about the global recovery amid a fresh wave of Covid-19 cases that’s pummeled stocks and other risk assets while buoying U.S. Treasuries and the dollar. And the pound has been caught up in the selloff, hobbled by a surge in Britain’s own infection rate just as Prime Minister Boris Johnson declared “Freedom Day” to mark the end of lockdowns.

The median of 77 analyst forecasts compiled by Bloomberg is for the U.K. currency to end the third quarter at $1.40. Yet the probability that it will fall short of that has jumped about 20 percentage points in the past month to 73%, according to a Bloomberg options pricing model. The chances that it will miss the equivalent euro forecast is 63%. For the Japanese yen, it’s 56%.

“We are no longer bullish sterling,” said Jack McIntyre, a Philadelphia-based money manager at Brandywine Global Investment Management who’s been trading in and out of the pound since the 2016 Brexit referendum. “We want to raise the dollar for a defensive position, based on China’s slowdown and its decline in credit impulse, and an increase in Covid variants, which could push back the full reopening schedule.”

About 55% of the U.K. population is fully vaccinated, one of the highest levels in the world. Yet that lead has been more than offset by its surging case count. It recorded an average of 46,000 new infections in the seven days to Thursday, up from 37,000 a week earlier.

That’s left the country bottom of a list of 20 major economies that have publicly available vaccination and infection data, according to a Bloomberg study measuring progress in containing Covid-19 based on the proportion of fully inoculated people, the weekly change in vaccine distribution, and the rolling seven-day average of new infections.

Renewed skittishness about Brexit is adding to the mix. The European Union’s refusal to renegotiate the deal governing Northern Ireland has put the bloc on a fresh collision course with the U.K., as Johnson’s government warns it will suspend parts of the agreement if the EU doesn’t budge.

But at the heart of what comes next is the Bank of England’s policy decision on Aug. 5. Options traders are snapping up protection against swings in the pound heading into the meeting, lifting the currency’s implied two-week volatility to its highest level since early May.

While policy makers have been sending mixed signals, dovish comments this last week from the BOE’s Jonathan Haskel and Catherine Mann triggered the biggest rally in favor of euro calls in five months.

“We don’t buy into that positive outlook for rates and so we feel that support for the pound will disappear,” said John Roe, head of multi-asset funds at Legal & General in London. “With Covid numbers and economic activity still somewhat subdued, more hawkish policy would be very hard to follow through on.”

Yet there are signs that the pound could be near a turning point, especially if the Bank of England tightens rates faster than its peers. Money markets are pricing in a hike by August 2022, compared with early 2023 for the Federal Reserve and mid-2024 for the European Central Bank.

For Philippe Jauer, the Paris-based global head of foreign exchange at Amundi Asset Management, one of Europe’s biggest money managers, rate hikes may come as early as the second quarter, providing a boost for sterling, especially against the euro.

“Recent pandemic figures haven’t derailed our strong convictions, considering the high rate of vaccinations in the U.K. and that hospitalizations remain under control,” Jauer said. “The improvement of the U.K. economy is the theme we have been playing in our portfolios.”

The median of 62 analyst forecasts compiled by Bloomberg is for Britain’s $2.7 trillion economy to expand 6.9% in 2021 as it emerges from its deepest recession in 300 years.

But there have been recent signs the recovery may be stalling amid concerns about the number of people being told to self-isolate because of the spread of the delta variant of the virus. An index based on a survey of purchasing managers fell unexpectedly in July to its lowest since March, when most stores and restaurants were still shut, IHS Markit said on Friday.

“The U.K. will probably reach herd immunity sometime soon, unless a more virulent strain emerges,” said Tom Clarke, whose Dynamic Diversified Allocation Fund at William Blair Investment Management has outperformed 87% of its peers this year. “A lot could go wrong -- because not much has gone right.”