The Pound-to-Canadian Dollar exchange rate appeared to find increasing support near to multi-month highs on Wednesday after Statistics Canada data suggested inflation may be better contained than was previously thought and asked awkward questions of assumptions about the Bank of Canada interest rate outlook.

Canada’s various measures of inflation were already expected to edge lower during June owing to changes in how some prices are measured although the actual declines were slightly larger and more widespread than anticipated by economists.

The data is potentially meaningful for the Loonie and Pound-to-Canadian Dollar outlook given that expectations of runaway price growth are what underpins market expectations for central bank policy changes, and expectations of the Bank of Canada (BoC) have recently been the tallest of all.

“There seemed to be less of a boost to prices than anticipated from the economic reopening that began in June. Prices for items such as clothing and footwear looked sluggish, and Statistics Canada didn't note any services seeing price pressures from the reopening,” says Royce Mendes, an economist at CIBC Capital Markets.

“The deceleration appears to confirm the central bank's view that much of the recent pickup in inflation was transitory,” Mendes adds.

The main Canadian inflation rate fell to 3.1% last month from 3.6% previously when forecasters had looked on average for a 3.2% increase.

Meanwhile the three different measures of core inflation that form the BoC’s preferred guide to price pressures were a mixed bag that did little to move the average of them, which dipped from 2.26% to 2.23% last month. 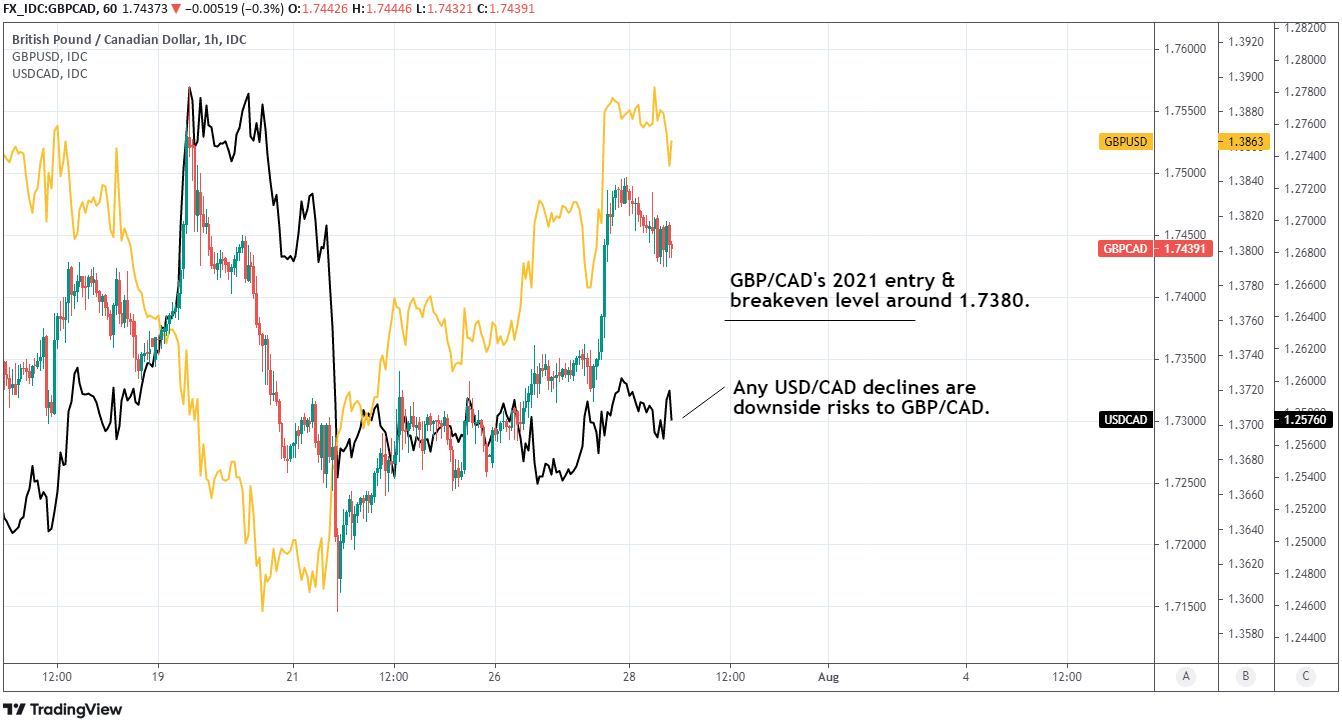 Above: Pound-to-Canadian Dollar rate shown at hourly intervals with USD/CAD and GBP/USD.

The Loonie softened a touch in the face of an advancing U.S. Dollar after Wednesday’s release while the Pound-to-Canadian Dollar rate edged higher having already lifted Sterling back into the top spot among major currencies for 2021 this week.

Much depends now on how Canada’s economic recovery and data pans out in the months ahead, although during this period the Canadian Dollar could be among the most susceptible to disappointments in the data due to elevated market expectations of the BoC.

“CAD’s poor performance last week in-spite of a BoC that delivered a taper underscores how positioning and elevated policy expectations has left former high-flying currencies vulnerable to a softening in the immediate cyclical outlook,” says Daniel Hui, a strategist at J.P. Morgan.

“NOK and CAD face the additional exposure if Delta impacts global mobility and through that, crude prices,” Hui adds.

July’s BoC forecasts and guidance suggested that rate setters see recent increases in inflation as temporary and that they’d be unlikely to be spooked into lifting its interest rates any time soon even if prices did advance further over the short-term.

This month’s BoC decision dealt the Canadian Dollar a blow at the time but could yet undermine it further if it turns out that inflation will be tamer in Canada going forward than it has been in places like the U.S. and UK of late. 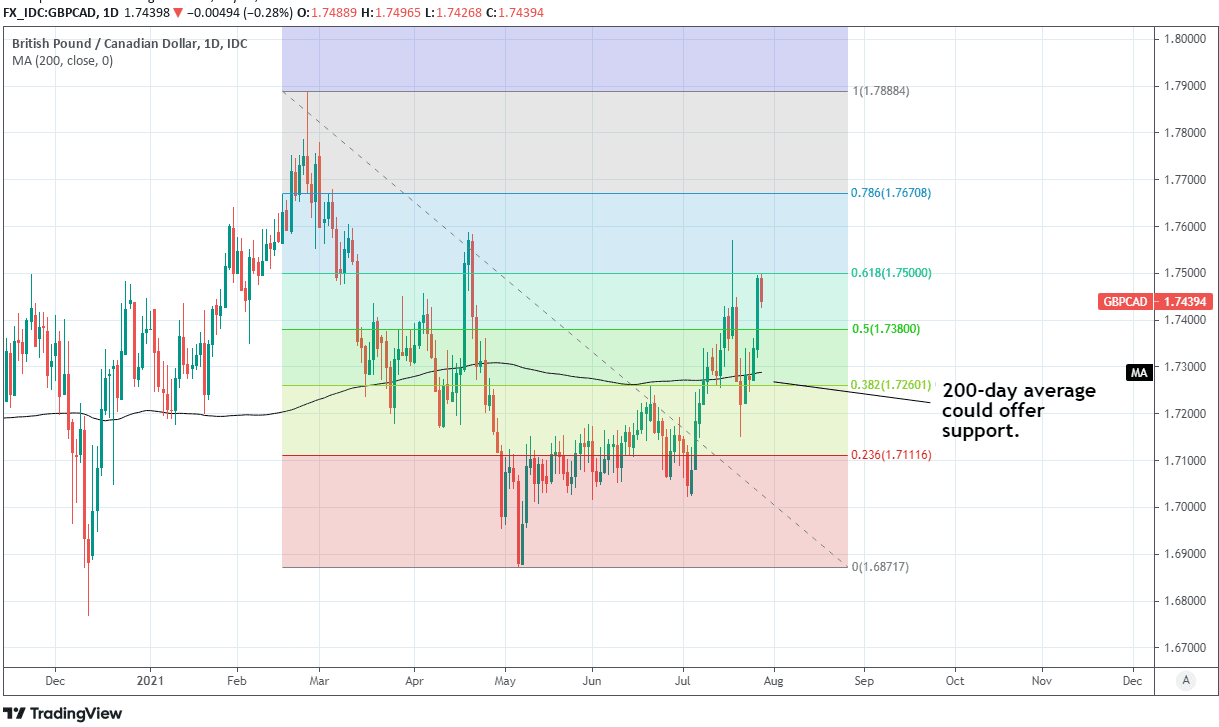 “The BoC in essence indicated a greater tolerance to upside inflation risks. The message in the Monetary Policy Report was that estimating the timing of closing the output gap could prove more complicated this time and hence greater time may be warranted to confirm this has been achieved,” says Derek Halpenny, head of research, global markets EMEA and international securities at MUFG.

Canada’s Dollar has shown resilience this week but could be vulnerable going forward, while Sterling has been bought heavily including through Tuesday’s worldwide unravelling of stock markets and commodity prices.

This saw the Pound-to-Canadian Dollar rate rising back above 1.7380 and its breakeven level for 2021 and prompted the top spot among G10 major currencies for 2021 to change hands again, although the outlook for GBP/CAD is hinged as much on USD/CAD as it is on Sterling factors.

Friday’s GDP data for the month of May is the next important data output from Canada and will contain a preliminary estimate of growth for June, the period in which ‘lockdown’ lifted for major parts of the Canadian economy, and could provide the next steer for both of the above exchange rates.

“While the rate of vaccinations have slowed, markets may look to the UK as a roadmap and timeline of the next delta wave as they are further ahead in bending the curves,” says Mazen Issa, a senior FX strategist at TD Securities.

“For USDCAD, we like fading [selling] rallies into 1.26 especially as daily uptrend support from the June lows has already been breached,” Issa says. 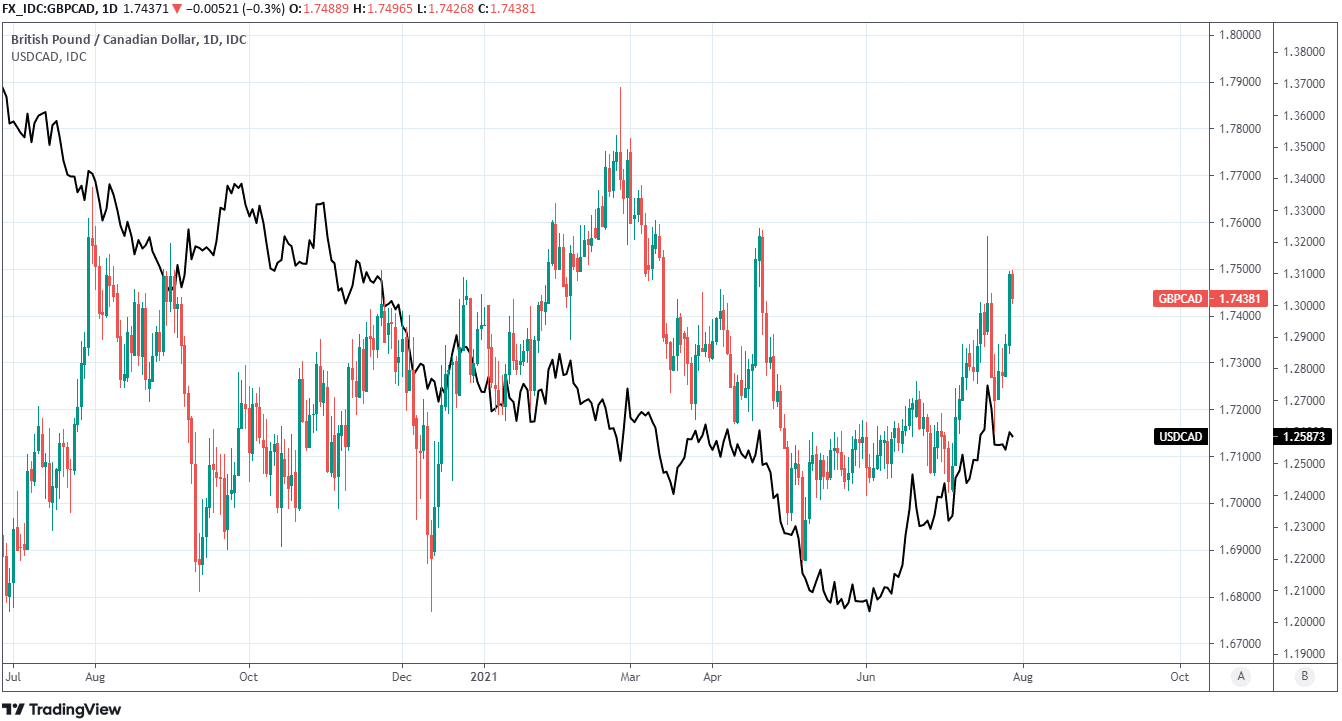 Above: GBP/CAD shown at daily intervals with USD/CAD.