By  Greg Ritchie and Michael Hunter

The pound may slip further into next week’s Bank of England rate meeting as analysts see stronger U.K. output data as not enough to ward off the prospect of an interest-rate cut.

Sterling initially climbed before falling back to trade around $1.31 after Friday’s U.K. Purchasing Managers’ Index data

rose to the highest level since 2018 in January. That still left money markets pricing in a 60% chance of a rate cut next week, little changed from Thursday even as economists said it was enoughto stave off further easing.

The reading had been

touted as a potential game changer for the Jan. 30 rate decision, with some strategists saying beforehand that a reading around the 52 level or higher could entice policy makers to hold rates steady. IHS Markit’s flash index for output across the whole economy increased to 52.4, with firms citing reduced political uncertainty after last month’s election.

Here’s what analysts think that means for markets ahead of the BOE decision next week:

— With assistance by William Shaw

After two years of bearishness in pound options, traders are turning neutral over the currency’s trajectory.

Sterling fell after the release of better-than-expected U.K. data, failing to sustain a rally that sent the pound to its highest in more than two weeks. A gauge of market sentiment and positioning suggests investors see balanced risks for the currency over the coming three months.

“It’s a waiting game now,” said Stephen Gallo, European head of foreign exchange strategy at BMO Capital Markets. “It’s unclear whether the Bank of England’s Monetary Policy Committee will think that enough easing has already been baked in by the January decline in pound rates, or that it will think this easing will need to be reinforced with a rate cut next week.” 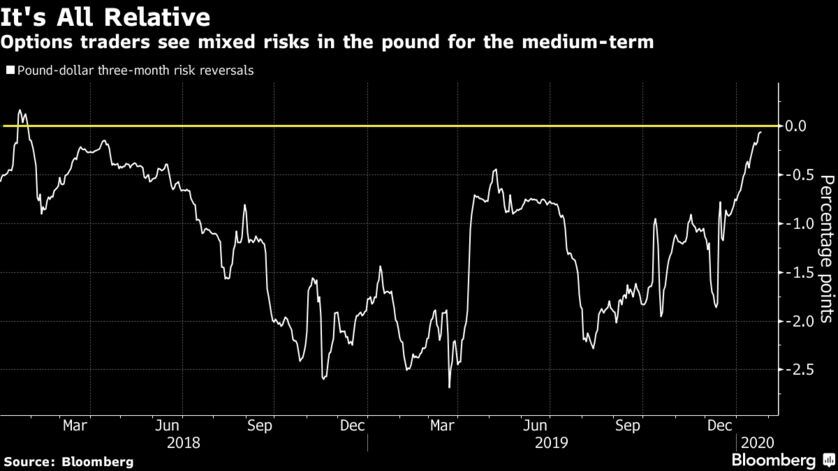 Sterling rose as much as 0.4% to $1.3173 after U.K. purchasing managers’ index data beat forecasts, while money market pricing for an interest-rate cut on Jan. 30 now stands at around 59%.

The market was positioned for an even more upbeat PMI number, which prompted profit taking and short-term selling, according to a Europe-based trader. Hedge funds are betting on the pound going in either direction at current levels, another trader in the region said, who asked not to be identified because he is not authorized to speak publicly.

Three-month risk reversals in cable trade at just six basis points in favor of pound downside exposure, as bearish sentiment in the currency stands at its lowest since January 2018.