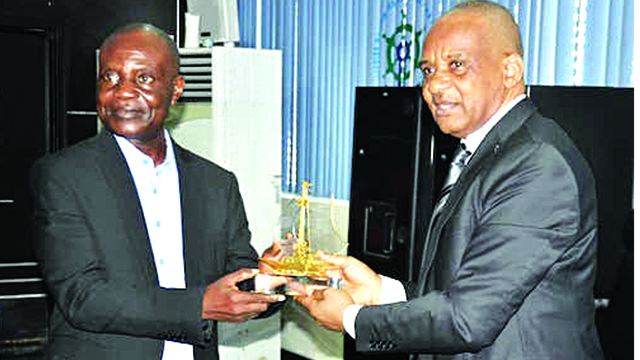 Bashir made the statement during a courtesy call by Executive Members of Nigeria Union of Journalists (NUJ), Lagos State Council, led by the Chairman, Mr. Adeleye Ajayi to the NIMASA headquarters in Lagos.

According to Jamoh, $783 million had been lost to piracy in the Gulf of Guinea.

He said: “We have recorded a drastic reduction in piracy and this is enough for us to beat our chest and say that we are ready to return to the category ‘C’ of membership of International Maritime Organisation (IMO).

“However, the year 2021 has witnessed a significant turnaround under my leadership as insecurity on Nigerian waters had reduced by 80 percent.”

Jamoh said that the last time the country had a drop in piracy attack in the nation’s waterways was in 1994, saying that Nigerian waterways were one of the top 10 safest glasses of water in the world.

He noted that this achievement was enough reason to sensitise and inform the international community that the Nigerian waterways were now safe than ever before, as Nigeria must take its rightful position among the comity of nations globally.

“We want the cost of the insurance premium paid by Nigerians as a result of insecurity to be reconsidered as insecurity in the country’s waterways had drastically reduced, ” Jamoh said.

The NUJ chairman assured NIMASA of regular publicity as well as a robust relationship between the Lagos Council of NUJ and NIMASA.

He lauded NIMASA for the giant strides it had achieved in the maritime sector, which included safeguarding of Nigeria’s waterways, collaboration with sister agencies of government as well as donations worth millions of naira to the Internally Displaced Persons’ Camps and victims of the disaster in the country.