Shunned by the West and China, Zimbabwe Turns to U.A.E. - BLOOMBERG

Sanctioned by the West and spurned by China, Zimbabwe has turned to the United Arab Emirates in its latest bid to find a savior that can arrest the collapse of its economy.

Zimbabwe’s government has approached the U.A.E. in hopes of selling a stake in its national oil company, according to three company and government officials familiar with the plan. It also wants companies in the U.A.E. to buy more of its gold, they said. 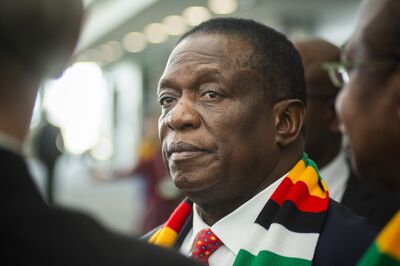 President Emmerson Mnangagwa has said U.A.E. investors will build solar plants in Zimbabwe, and U.A.E. President Sheikh Khalifa bin Zayed Al Nahyan a year ago issued a decree to open an embassy in Zimbabwe. Dubai also contributed to relief efforts when Zimbabwe was hit by a cyclone last year.

Zimbabwe’s economy is in free-fall: It likely contracted by more than 6% last year, according to government estimates. Half the population is in need of food aid, inflation is running at over 500% and its currency has depreciated by more than 90% against the dollar since a 1:1 peg was abolished in February last year.

“They need investment desperately,” said Jee-A van der Linde, an economic analyst at NKC African Economics in Paarl, South Africa. “It’s been snowballing. I don’t know where it’s going to end up. I don’t know how that would be appealing for the U.A.E.”

Oil companies in the U.A.E. said they were unaware of the interest.

The U.A.E.’s foreign ministry didn’t respond to requests for comment.

The U.A.E. is not the only country Mnangagwa has targeted for potential investment. Since taking power from Robert Mugabe in a November 2017 coup, he has crisscrossed the globe repeating the mantra ‘Zimbabwe is open for business.’ Two trips to Russia and former Soviet republics revived interest in a platinum project and a fleet of second-hand Belarusian buses now ply the streets of the capital, Harare, and the second-biggest city, Bulawayo.

By May 2019, investment pledges worth $27 billion had been announced in projects ranging from steel mills to abattoirs. There’s little evidence that they are being developed.

A visit by Wang Yi, the Chinese foreign minister in January ended with only pledges of further infrastructural projects being carried out by China. There was no mention by the “all-weather-friend” as Zimbabwe likes to describe China, extending any financial bailout.

Zimbabwe wants to sell a stake of as much as 25% in the National Oil Infrastructure Company of Zimbabwe, the people said, declining to be identified as the plans haven’t been disclosed.

NOIC owns storage depots at the port of Beira in neighboring Mozambique as well as five locations in Zimbabwe. It also owns gas stations and the pipeline that brings oil products from Beira to Mutare for companies including Puma Energy BV, in eastern Zimbabwe.

Zimbabwe is prone to frequent shortages of motor fuel and sees a relationship with the U.A.E., possibly through the Abu Dhabi National Oil Company, as a way of securing supply, one of the people said. The southern African nation consumes 1.4 million liters of gasoline and 2.5 million liters of diesel daily, according to the Zimbabwe Energy Regulatory Authority.

“We are working toward establishing a permanent arrangement with friendly countries and that also includes the U.A.E.,” said Fortune Chasi, Zimbabwe’s energy minister, declining to comment directly on whether Zimbabwe had approached the U.A.E.

— With assistance by Zainab Fattah, and Mahmoud Habboush