The pound’s rally could have a lot further to run if a Brexit deal is secured -- and far to fall if talks fail next week.

Traders are the most bullish on record for the U.K. currency over the next month after the European Union’s chief negotiator recommended Friday that detailed talks can begin in earnest. The currency saw its biggest two-day rally in a decade to touch $1.27 and the gains could extend up to $1.30 if a divorce deal emerges, according to Mizuho Bank Ltd. 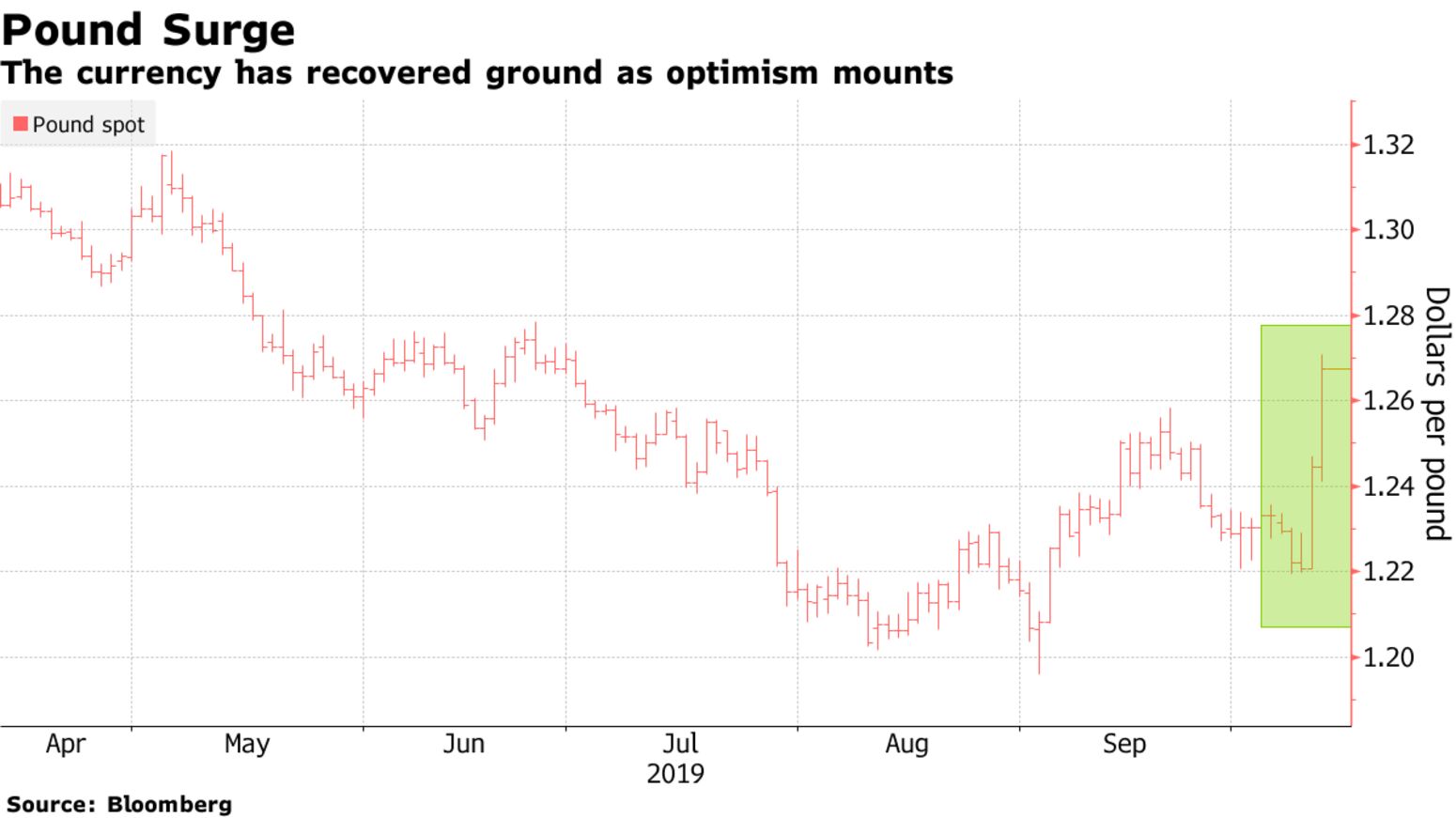 “There’s a barrage of buyers coming to the market from across the globe,” said Neil Jones, head of hedge-fund currency sales at Mizuho. “The market is switching firmly from no-deal to deal expectations.”

The optimism has turned the market on its head, after many investors were betting against sterling this year on fears of a crash exit from the European Union. Now one-month options are showing their strongest-ever bias in favor of contracts to buy the pound against the dollar.

With details of actual progress in the talks still scant, the two sides need to reach a deal before next week’s EU summit to give the U.K. Parliament a chance to sign off on it before Prime Minister Boris Johnson’s deadline of Oct. 31. Otherwise another extension and a potential election would re-emerge as the likely outcome, a scenario that many had been expecting.

“A Brexit deal would be a significant positive surprise that should push the pound toward $1.35 and euro-sterling toward 85 pence per euro,” said Credit Agricole SA strategist Valentin Marinov.

If a deal is agreed in Brussels, ratification by lawmakers would be the next hurdle to a more significant rally in the currency, given Parliament rejected former premier Theresa May’s deal three times. Approval this time could push the pound up to $1.40, the highest since April 2018, according to Mizuho’s Jones. Failure could drive it back down to $1.22, he said.

Even with the growing optimism, the market is still biased in favor of protection and not everyone wants to jump on the rally. For Investec Asset Management portfolio manager Russell Silberston, who went neutral on the pound over the summer, the risks are still too high to bet big on the currency.

“My fear is that this is the last throw of the dice, so whilst it is clearly positive, it also feels like the point of maximum danger,” said Silberston. “If this fails, we lose all of the past two day’s gains and more as our choices are then no-deal or delay.”