Last-ditch talks between the chief Brexit negotiators of the European Union and the United Kingdom have concluded with a spokesperson for the European side describing them as “constructive.”

EU spokesperson Mina Andreeva told reporters the pair were continuing to work toward a deal, and that talks had been “constructive.” “If there is a will, there is a way,” she added.

Sterling, which has enjoyed a choppy session Friday, rose more than 1.3% to $1.26 following the comments. According to Reuters data, the British pound has risen more than 3% over the last two days, marking the biggest 48-hour rally since June 2016. 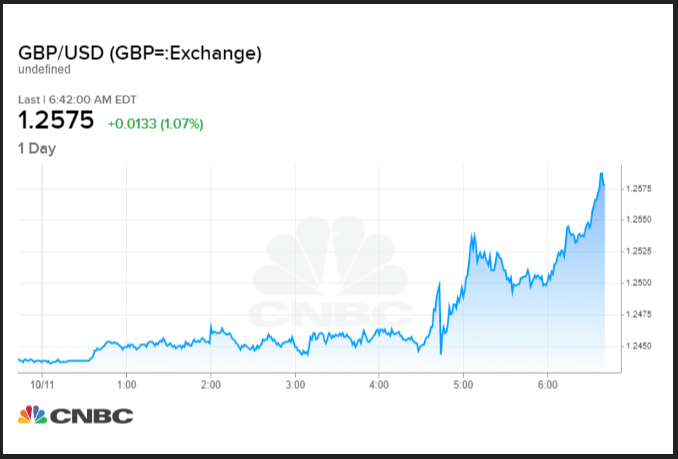 In a note Friday, J.P. Morgan Brexit analyst Malcolm Barr said he now rated the chance of an orderly withdrawal deal at 50%. He added it would come with a “modified or time-limited backstop.”

The backstop is an arrangement whereby Northern Ireland remains in the customs union — a common tariff area — until a solution can be found to prevent any return of physical checks on the border.

Earlier Friday, the head of the European Council Donald Tusk said that while he had received optimistic messages that a deal could be reached, the U.K. had so far not come forward with a “workable, realistic proposal.”

Late Thursday afternoon, sterling rose sharply after U.K. Prime Minister Boris Johnson met with his Irish counterpart Leo Varadkar. Following the three-hour meeting, a joint statement was issued which claimed a “detailed and constructive” discussion which offered a “pathway to a possible deal.”

Johnson’s position could be particularly dependent on the 10 Democratic Unionist Party MPs who have insisted that Northern Ireland should be considered no different from the rest of the United Kingdom during the Brexit process.

The U.K.’s border on the mainland of Ireland is the central sticking point with the EU insisting that there can be no return to a hard border between the Republic of Ireland and Northern Ireland. The latter is a constituent nation of the United Kingdom.

Erecting a physical border between the two is problematic as it would contravene a peace treaty, known as the Good Friday Agreement. This treaty was put in place to help end a decades-long conflict that pitted Northern Irish unionist groups and the British state against different factions of the Irish Republican Army (IRA).

Europe and Dublin, in particular, have said it would not accept checks and border infrastructure on mainland Ireland.

This is a breaking news story. Please check back for more.