- Charts point to GBP/USD retreat back below 1.30 up ahead

- But Thursday's election will dominate GBP in the days ahead.

- Election results to set direction for GBP/USD into year-end.

The Pound hit repeated new multi-month highs against the Dollar in recent days after cracking a tough level of resistance on the charts although Thursday's general election is now looming over the British currency and even technical analysts are warning of a possible retreat in the Pound-Dollar rate.

Pound Sterling had seen its advances on the Dollar repeatedly capped by the 1.30 level in the last six weeks but a combination of technical factors and speculation resulting to shifts in the opinion polls helped the British unit break through that ceiling last week. Sterling gained 1.68% over the Dollar last week to close Friday at 1.3132.

A solidyfying Conservative Party polling lead and initial advance across prior resistance levels were instrumental in providing sufficient fuel for the British unit to achieve such a strong finish to week, although those polls may turn into more of a headwind for the Pound over the coming days. And Technical analysts at Commerzbank are also now warning of losses ahead for the exchange rate.

"GBP/USD has reached its 5 year downtrend at 1.3156. Also found in this vicinity is the 50% retracement of the move down from 2018 at 1.3167 and the 1.3187 May high and this is tough resistance and we look for the market to fail here," says Karen Jones, head of technical analysis at Commerzbank.

Jones, who led Commerzbank's technical analsis team to 1st place in the Euromoney FX survey this year and a top-five in each of the last five years, says the Pound should find support at 1.3013 in the first instance of any dips lower. The 20-day moving-average of prices lcoated around 1.2938 is the next level of support that guards the November 08 low of 1.2768. That is the last technical defence of the 2-day moving-average of prices located around 1.2696. 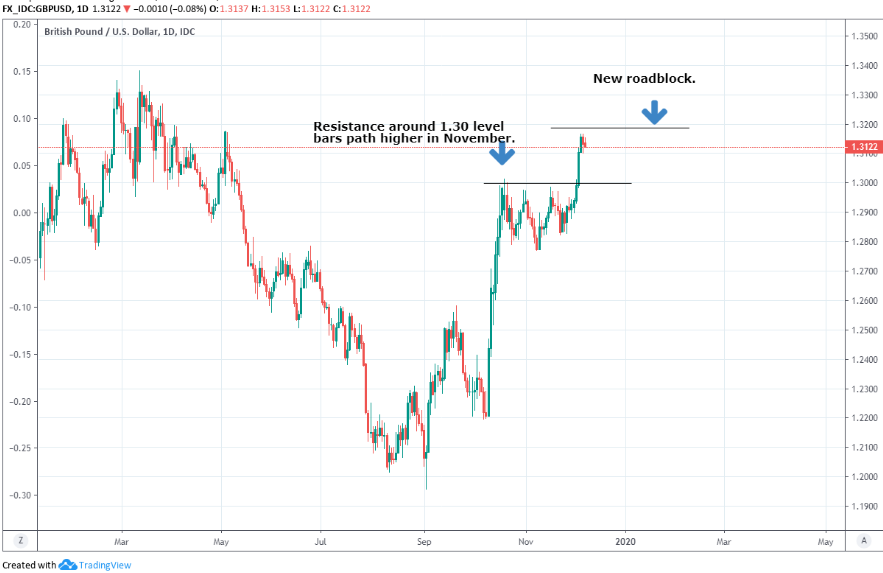 "This guards the 1.2582 September high. Below 1.2582 lies the 1.2548 uptrend line. It guards 1.2196/94," says Jones, who jettisoned from her trading portfolio on Wednesday, a bet favouring further upside in the Pound-to-Dollar rate. She and the Commerzbank team are betting on a fall in the Pound-to-Dollar rate and have stop-losses located at 1.3190.

Jones' work is confined to studies of trends and momentum on the charts rather than polls and Westminster politics. Her current views and the signals coming off the charts do not neccesarily conflict with those of fundamental analysts who're taking their cues from the politics around the Pound, although much about the outlook will be determined on the fundamental side by the outcome of Thursday's general election.

"We would argue on a few metrics GBP/USD is looking stretched," says Derek Halpenny, head of research, global markets EMEA and international securities at MUFG. "Technically, (RSI) GBP/USD has now just entered over-bought territory while the options market also points this way. The GBP/USD 1/3/6mth risk-reversals have all dropped sharply after rising through the GBP rally since mid-October...GBP/USD at or above 1.3500 will be attractive levels to sell post an expected Tory election victory."

Halpenny says a Conservative Party election victory this Thursday would likely see the market take Prime Minister Boris Johnson and his withdrawal agreement all that way to the bank in a move that could utlimately take the Pound-Dollar rate back to 1.35. That's a level that MUFG and others have long argued would be achievable if the withdrawal agreements hawked to MPs and the public by both Johnson and Theresa May are ever approved by parliament.

"GBP/USD at or above 1.3500 will be attractive levels to sell post an expected Tory election victory," Halpenny says. "Our MUFG GBP/USD yield model shows the under-valuation divergence from spot has now nearly been fully removed – an indication of a marked reduction in the Brexit risk premium. We view that as unrealistic given the uncertainties that still lie ahead." 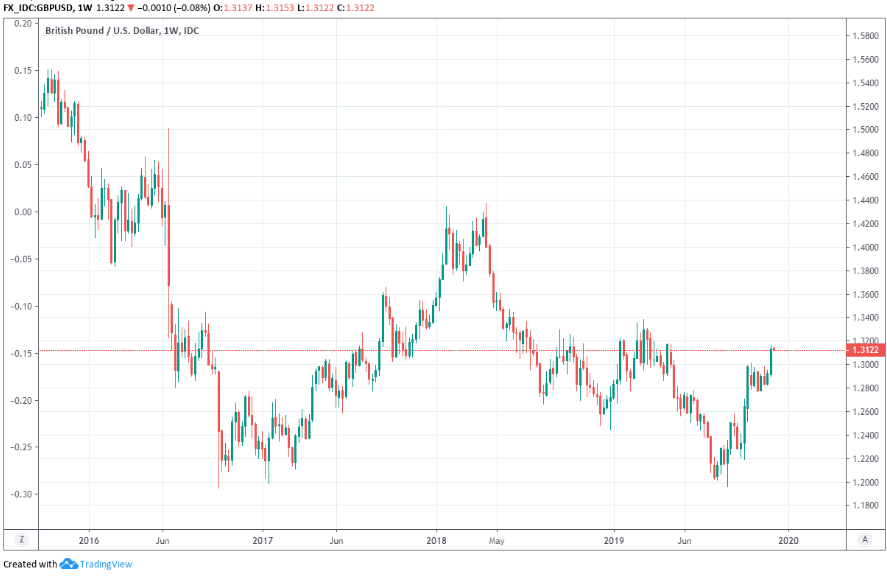 Pound Sterling: What to Watch

The Pound has made strong gains over the Euro and Dollar in recent days, helping make it the second best performing major currency of the last week and providing Sterling with a bullish set-up on the charts although the Thursday general election will doubtlessly dominate the week ahead.

Opinion polls have shown the Conservative Party lead stabilising at around 10% this last week, which is enough to assure a small parliamentary majority according to some pollsters. And on that score, the implied odds of a Conservative majority rose to 72% on the Betfair Exchange last week, the highest level recorded on the exchange since the election campaign began.

However, and with just days to go before the ballot takes place, bitter memories of how former Prime Minister Theresa May converted a strong double-digit polling lead at the beginning of the 2017 campaign into a hung parliament barely more than two years ago could constrain investor appetites for Sterling in the days ahead. Meanwhile, uncertainty over the likely outcome of the vote may also prompt some profit-taking in Pound Sterling trades.

The bottom line is that despite investors, analysts and pundits being happy to wager on a victory for Prime Minister Boris Johnson this week, the Pound may be vulnerable to a downward correction over the coming days as speculative bids for the British currency evapourate and as some investors take profits off the table ahead of the vote.

There is only one meaningful piece of UK economic data due for release this week and that's the intiial estimte of October GDP growth that is due out at 09:30 Tuesday. Consensus is looking for a 0.1% increase to reverse and equivalent contraction that was seen in September, the final month of the third quarter in which the economy expanded 0.3%, according to the initial estimate of the Office for National Statistics.

A Johnson victory might see the UK move forward on Brexit and would certainly bar an increasingly radical opposition Labour Party from 10 Downing Street for up to five more years. Currency markets favour a Conservative government.

A part of the market bias comes from a desire among investors to negate the threat of a 'no deal' Brexit and also see the economy move on from the current stage of negotiations, which has paralysed the Bank of England and some businesses, while the rest is centred on fears about the opposition's economic agenda.

The election comes amid fresh signs of weakness in the UK economy as well as at a tense time in the U.S.-China trade talks, which have shrouded the entire global economy in a cloak of uncertainty.  This is after IHS Markit PMIs suggested last week the economy contracted in November and that it might face a decline for the fourth quarter. That would be the second contraction this year.

The Dollar: What to Watch

The Dollar closed last week on the front foot after a blowout U.S. non-farm payrolls report sent doubters of the world's largest economy packing during noon trading in the final session of the week, while an action-packed risk-heavy calendar could now keep the Dollar buoyant in the days ahead.

U.S. nonfarm payrolls came in at a staggering 266k for last month, meaning the economy created more than a quarter of a million new jobs in November, while the unemployment rate fell 10 basis points back to a multi-decade low of 3.5%. Those two numbers were enough to light a fire underneath the Dollar even if average hourly earnings growth did disappoint the market at just 0.2% for November.

Markets had looked for just 188k new jobs to be created so were blown away when the payrolls number came out at 266k and even more so when the estimate for October jobs growth was revised up from an initial 128k to 156k fat the same time. All told, the U.S. jobs market has remained in rude health in recent months even in spite of ebbing and flowing tensions between the U.S. and China over the latter's trade practices, and in the face of pessimism about the global economy.

"While it's true that today's payrolls figure was flattered by the return of auto workers who were on strike in the prior month (the impact of which the BLS previously estimated to be 46K direct employees, and something that didn't impact the ADP report), this was still a very strong job gain even accounting for that," says Andrew Granthan, an economist at CIBC Capital Markets, in a note to clients Friday. "This was a strong report almost all the way through the numbers."

Economists are right when they often say the labour market is a 'lagging indicator' and that it can frequently be the last thing to warn of trouble ahead when the economy gets dealt a bad hand but even so, the Federal Reserve (Fed) is unlikely to be find cause in any of the recent data for the "material reassessment of the outlook" that Chairman Jerome Powell recently said would be required to change the bank's view that the economy and interest rates are  “in a good place”.

That could see markets left with little choice but to conclude that the current 1.75% Federal Funds rate will continue to tower over all other major currency interest rates with the exception of only the Canadian Dollar. That could mean the greenback is set to remain supported and that gains for other currencies will remain limited unless and until other economies can close the performance gap between them and the U.S.

"Chair Powell should re-emphasise the data-dependent approach of the committee. With Nov US CPI inflation to print 2%YoY (Wed) and Nov retail sales (Fri) rising, the case for no urgent rate cuts should remain in place. Also, today’s labour market data further supported the notion of stability in interest rates for now," says Chris Turner, head of FX strategy at ING.

The Federal Reserve will announce its next interest rate decision at 1900 Wednesday while November's inflation figures are due out at 1330 on Wednesday. U.S. inflation rose from 1.7% to 1.8% last month, leaving it nestled just below the Fed's 2% target and it might take a sharp fall for the November month in order to wobble the Dollar this week, although the market is looking for that number to rise from 1.8% to 2% for that month.