These are the happiest, worst states to live in Nigeria - BUSINESSDAY

Happiness is free, but economists believe it comes with the availability of jobs to earn a living and price stability which allows goods and services remain affordable.

The misery index is an economic measure invented by economist Art Okun in the 1960s to measure how content people are with their lives.

The logic is that “misery tends to flow from high inflation, steep borrowing costs and unemployment,” Steve Hankes, a Professor of applied economics at The Johns Hopkins University and senior fellow at the Cato Institute notes in his report: Hanke’s Annual Misery Index 2018.

In this write-up, BusinessDay provides a simple misery index (based on the summation of inflation in April 2019 and latest data on unemployment) to rank Nigerian States and show where happiness is (or really isn’t) -based on computations. 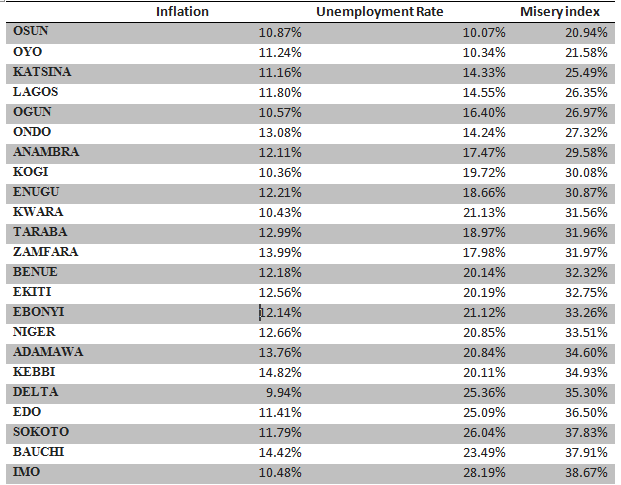 Osun is Nigeria’s happiest (or least miserable) place on account of its latest unemployment and inflation figures.

Osun is an inland state in south-western Nigeria. Its capital is Osogbo. The state is the cradle of Yoruba civilization and home to several of Nigeria’s most famous landmarks.

According to the National Bureau of Statistics, Osun State currently has the least unemployment rate (10.07 percent), bringing its misery index to 20.94.

However, the state has internally generated revenue per capita of N1, 378 per person according to BudgIT, and the National Human Development Report put its HDI at 0.512, 13th of 36 states.

Oyo is Nigeria’s 14th-largest state by land area. It is an inland state in south-western part of the country, with its capital at Ibadan, which is the biggest city in West Africa.

The state ranks as Nigeria’s second-happiest place on the account of its low unemployment rate (10.14%), the second-least in the country. Inflation rate in Oyo in April stood at 11.24%, to bring its misery index to 21.58.

The state however, has a HDI figure of 0.440, to take the 22nd spot in human development ranking.

Katsina is Nigeria’s fourth most populous state, and home to President Muhammadu Buhari.

The North-western state ranks third in misery ranking given its low inflation and unemployment figures at 11.16% and 14.33% respectively, totalling its misery score to 25.49.

The state debt has been growing at annual rate of 527.13% according to BudgIT’s State of States 2018 report.

Lagos is Nigeria’s economic and commercial capital, and the fifth biggest economy in Africa.

The city of excellence is the fourth most happiest place in Nigeria to live in on the back of its relatively low unemployment rate of 14.55% even though its inflation figure in April, which stood at 11.8% outstrips the country’s average headline inflation of 11.31%.

The state has the highest IGR in Nigeria accounting for 33 percent of total IGR of 36 states plus Federal Capital Territory in 2018. The National Bureau of Statistics put Lagos IGR at N382 billion.

Ogun State, the industrial headquarters of Nigeria, is home to major factories including Dangote Cement in Ibese, Lafarge Cement Factory in Ewekoro and Coleman Cables in Sagamu among others.

The Gateway state is the fifth-most happiest place in Nigeria given its misery score of 26.97. Inflation rate is relatively low in the state at 10.87%, below the country’s 11.31%, with unemployment rate at 16.40%.

Ogun has a HDI score of 0.549, the 7th in Nigeria. The state generated N84 billion in 2018, indicating 7 percent share in total IGR across the federation. 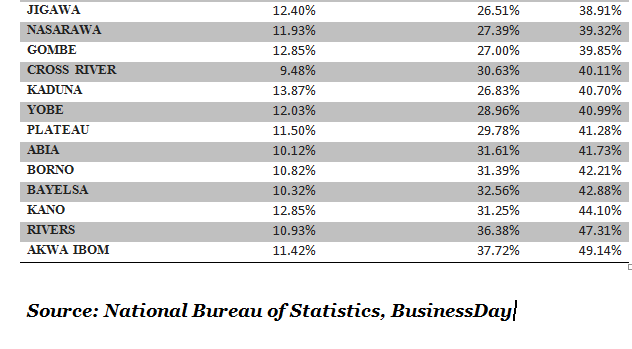 Akwa Ibom is located in the coastal southern part of Nigeria. It has an airport and two seaports on the Atlantic Ocean.

Rivers State is located in south-southern region of Nigeria, and is the country’s sixth most-populous state, home to refineries and major oil companies.

The state is the second-most miserable in Nigeria with a discomfort score of 47.31 on the heels of high unemployment rate of 36.38% despite having a relatively low inflation figure of 10.72%.

Rivers’ HDI is 0.542, the 8th in the country. The state is the third-largest recipient of Federal Account Allocation Committee (FAAC) disbursement in Nigeria at N119 billion in 2018.

Kano is the commercial nerve centre of Northern Nigeria, and is the second largest city in Nigeria. The North-western state is the third most miserable in the country with a discomfort or misery score of 44.10 It has a high unemployment rate of 31.25%, tangibly above the country’s 23.1% figure, and a high inflation figure of 12.13%.

Bayelsa is located in southern Nigeria in the core Niger Delta region between Delta State and Rivers State. The state boasts of one of the largest crude oil and natural deposits in Nigeria. It ranks the fourth most discomfort place in Nigeria with a misery score of 42.88 on the heels of high unemployment figure of 32.56% despite having the one of the least inflation rates in Nigeria.

The war-torn North-eastern state is Nigeria’s second largest state by land area. The state is the homeland of the Kanuri people in Nigeria.  Given its misery score of 42.21, the state ranks the fifth most discomfort place in Nigeria. Unemployment stands tall at 31.39% in 2018, and inflation relatively low at 10.82%.