Traders bet that oil at US$100 is a question of when, not if - BLOOMBERG

Surging demand, fading Omicron fears, and OPEC+’s inability to ramp up output have underpinned an eye-watering rally in oil prices.

Global benchmark Brent crude has jumped 25 per cent to around US$88 a barrel since the end of November. Some in the market now think it’s now a question of when -- not if -- oil hits triple digits, somewhere it hasn’t been since 2014.

Goldman Sachs Group Inc. said this week it sees prices reaching US$100 in the third quarter as consumption surprises to the upside. The cost of US$100 call options for Brent’s December contract also surged to a record on Wednesday. 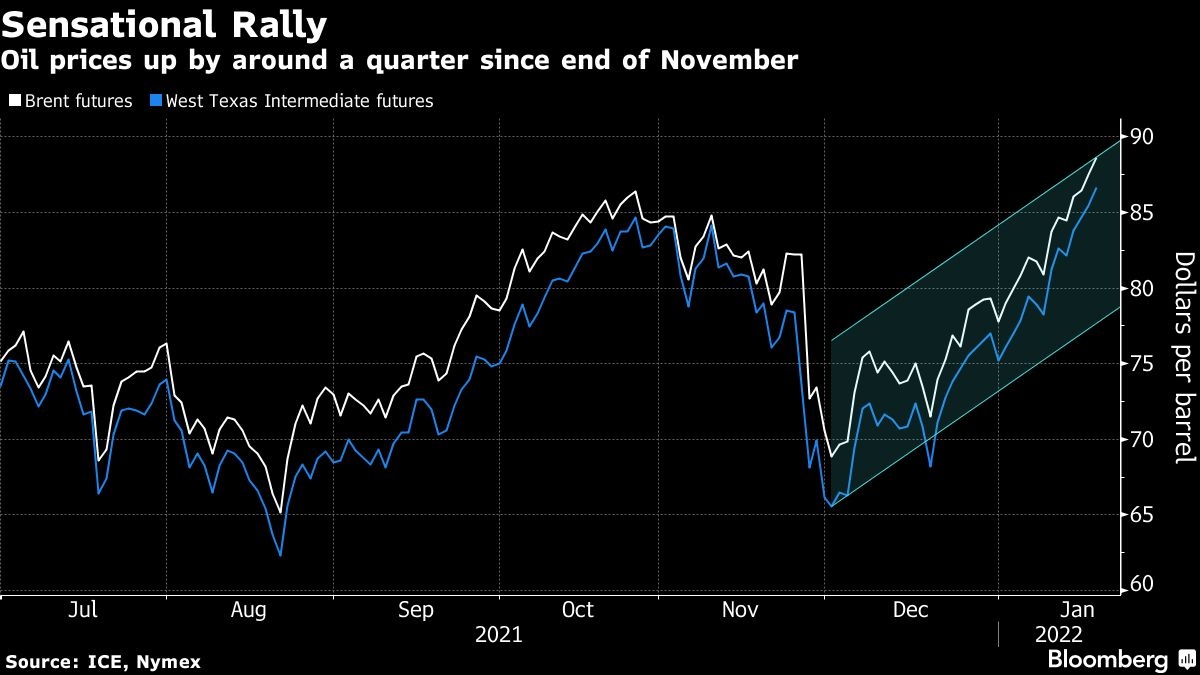 Crude at that level would add to the already considerable inflationary pressure in the global economy, causing a headache for central banks and governments. It’s certainly not a fait accompli, however. U.S. shale is coming back and has the potential to restrain the rally, while all eyes are on China to see if Omicron can breach COVID-19 defenses that have so far proved mostly impenetrable.

Here’s a closer look at how oil got here and where it’s likely to go next:

Oil has now more than recovered from the discovery of Omicron in late November, which revived memories of Delta and sent Brent tumbling below US$70 a barrel. The relative mildness of the variant, high vaccination rates in much of the developed world, and a general reluctance to impose harsh lockdowns meant that a major hit to consumption didn’t happen.

Demand is roaring, with spot market cargoes being snapped up at sharply higher premiums. It’s the same in the product space. Middle-distillate stockpiles at the Asian energy hub of Singapore have fallen to the least since 2013. The world is short of diesel, and even jet fuel -- the oil product hit hardest by the pandemic -- is coming back strong as long-distance air travel starts to resume. With the exception of a major virus outbreak in China or a scary new strain emerging, it’s hard to see a demand reversal.

Global crude stockpiles finally fell back to pre-pandemic levels in early-January, according to oil analytics firm Kayrros, with drawdowns led by sharp declines in China and the U.S., where inventories are at the lowest since late-2018. The tightening supply backdrop has pushed oil’s market structure deeper into backwardation, where prompt oil costs more than longer-dated contracts, further reducing the incentive to store crude for later sales. 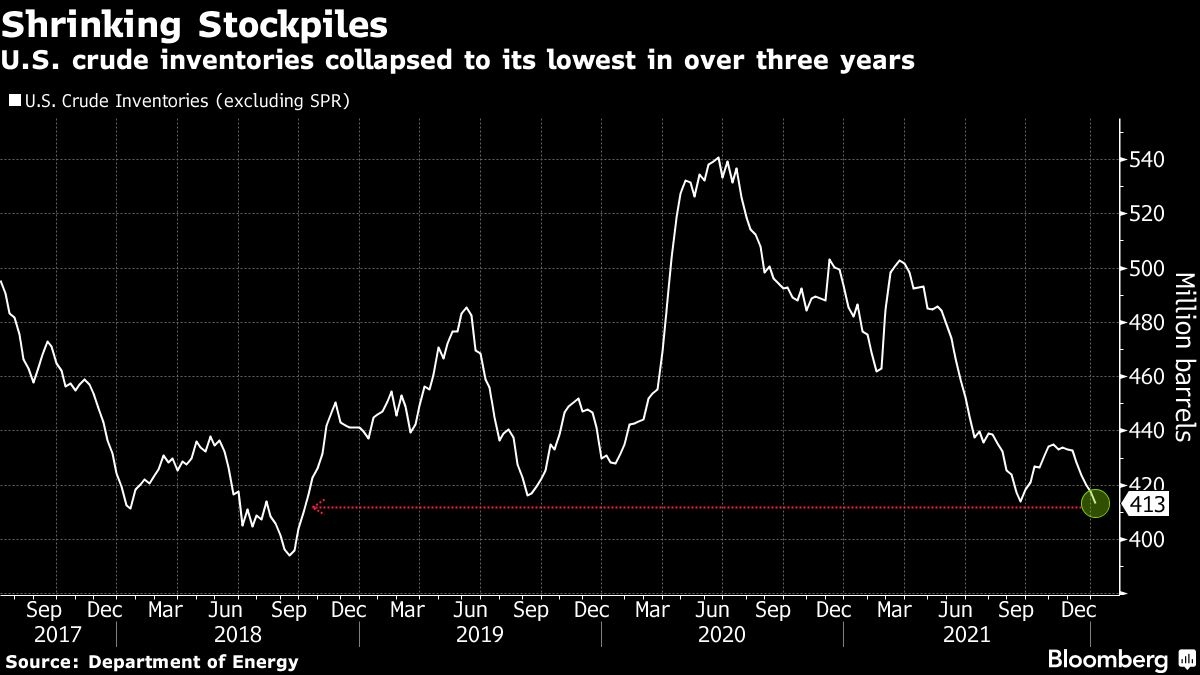 The market currently has no supply buffers, making it more susceptible to price spikes driven by supply shocks, according to Amrita Sen, chief oil analyst at industry consultant Energy Aspects Ltd. “When you have buffers, small outages like what we have seen over December and January matter a lot less,” she said in a Bloomberg TV interview. “But we don’t have that luxury.”

OPEC+ has officially been restoring output at the rate of 400,000 barrels a day each month. But in reality, the alliance isn’t managing to get close to that target. African members, in particular, are struggling to ramp up production, with OPEC only adding 90,000 barrels a day in December as a supply boost by Saudi Arabia was offset by losses in Libya and Nigeria. Even Russia, part of the wider alliance, has said it may only be able to deliver about half of its scheduled supply increases over the next six months.

Those supply issues look set to be a major factor pushing oil toward the US$100-a-barrel mark. Iran could prove to be a wildcard, however, if the long-running nuclear talks come to fruition and pave the way for a resumption in official crude exports. But the market impact might not be that large, given that a lot of shipments from the Islamic Republic -- as well as Venezuela -- are already finding their way to China despite American sanctions.

While U.S. oil output has been increasing it’s still not enough to cool the price rally. Supply from the Permian Basin -- American’s most prolific shale patch that spans Texas and New Mexico -- rose to a record in December. Low production costs make the Permian the most appealing to drillers eager to cash in on rising prices, but higher overheads in other areas and supply-chain snarls have so far stifled a faster ramp-up in activity. 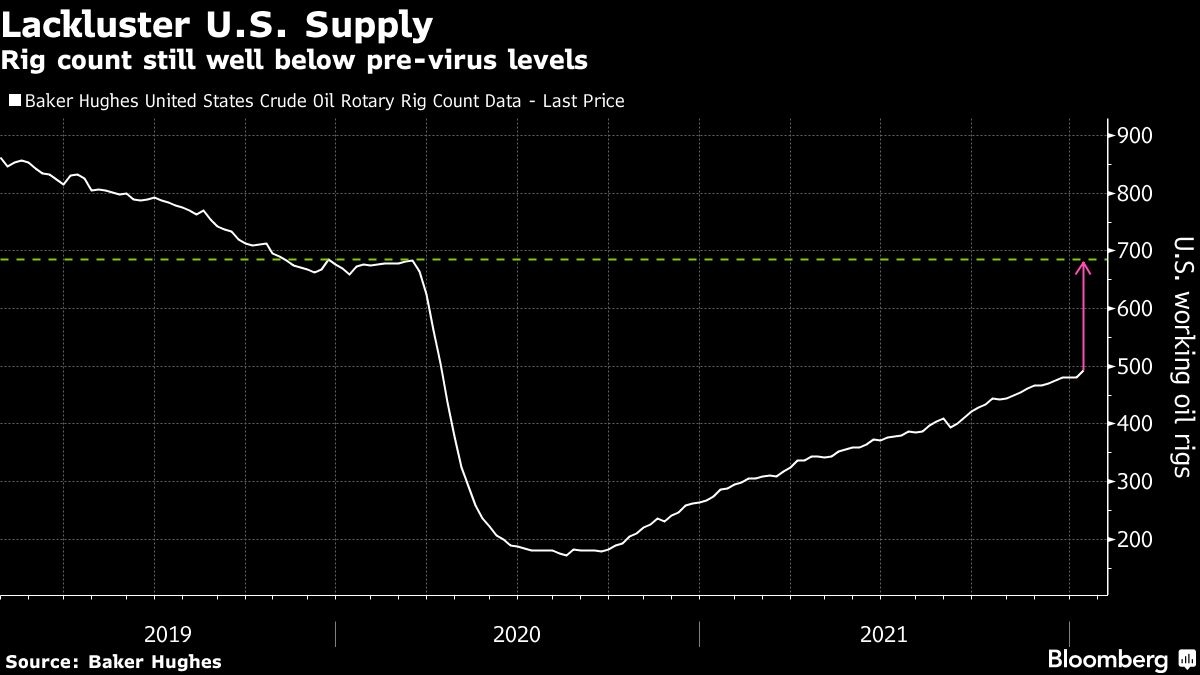 The number of working oil rigs in the U.S. has climbed back close to 500 from below 200 in the second half of 2020, according to data from Baker Hughes, but is still more than 200 below levels in March of that year. Shares of U.S. energy companies are surging as oil rallies, but the big question -- which will be critical in determining if crude gets to three figures -- is whether shale drillers will use the extra cash to boost production this year.

So far China’s zero-COVID policy featuring draconian city-wide lockdowns has succeeded in preventing a wider outbreak and a material hit to oil demand in the world’s biggest importer. But the approach will be tested by Lunar New Year celebrations -- when many Chinese traditionally return to their home towns -- that are less than two weeks away, as well as the Winter Olympics in and around Beijing from Feb. 4 to 20.

Omicron cases have already been reported in Beijing, Shanghai and Shenzhen, with Eurasia Group ranking the potential failure of China’s pandemic strategy as the top global political risk of 2022. It appears unlikely that Beijing will be able to control the highly transmissible variant in the same way it staunched previous outbreaks, and it may already be backing away from COVID-Zero. A big virus hit to economic growth and energy demand in China is perhaps the most intriguing wildcard to watch for oil prices over the next couple of months.