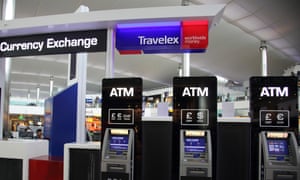 A Heathrow Travelex ATM failed to pay out … and failed in its customer service Photograph: Alamy

I used a Travelex cash machine to withdraw €100 at Heathrow Terminal 4 at the beginning of July. It returned my debit card, but issued no cash. Worryingly, however, it did issue a receipt.

Staff at the adjacent Travelex desk nonchalantly told me that “this happens sometimes” if the machine is jammed or has run out of bank notes and that I would not be debited. My bank confirmed the transaction had gone through and I would be refunded.

The Travelex manager at Heathrow would only speak to me over the phone and could offer no further advice. Twelve days later, I had still not been refunded. My experience of Travelex customer services was dismal. The assistant wouldn’t even put up an “out of order” sign on the machine in case it still issued other currencies. SA, London

My experience is just as dismal. Its press office stirred itself to promise a response over three weeks after I alerted it to your experience, then fell silent again. My subsequent reminders have been ignored. Its insouciance is scandalous given the potential scale of customer losses.

Luckily, your bank refunded you two weeks after the withdrawal, but it can be a long, fruitless battle to get your money back when cash machines fail to deliver. In future, steer clear of currency exchange ATMs, and not just because they may not issue the money.

A bank cash machine used abroad will supply the requested euros, then your bank will convert the sum to sterling using a published conversion rate, plus a small fee. A Travelex ATM will convert the amount of your withdrawal to sterling at its own higher exchange rate, before notifying your bank. You also pay significantly more to exchange currency at airports, whether using a machine or a human, so always research the best deals online and buy before you travel.