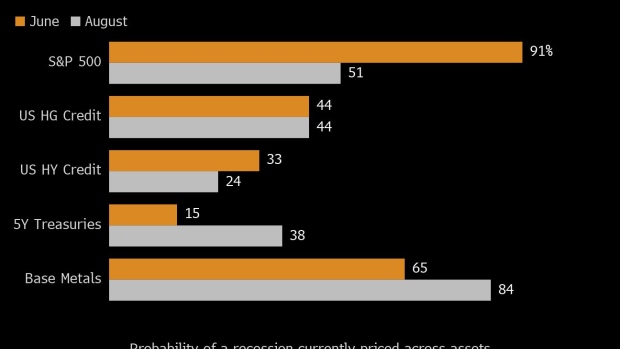 (Bloomberg) -- Markets appear to have moved on from the furious debate on what is the right definition of a recession.

A US economic downturn looks increasingly less likely in the eyes of the stock market, according to a measure of recession probabilities created by JPMorgan Chase & Co. strategists.

In fact, with the exception of base metals, pricing of major markets suggest even odds, or less, of one happening after the US economy shrank for a second straight quarter. Together equity, credit and rate markets have assigned a 40% probability to a US recession, down from 50% in June.

The apparent calm, especially in equities, jars with warnings from economists and an inverted US yield curve, often seen as a signal of an approaching recession. Forecasts among economists in the same period have jumped to a consensus of 40% from 30%.

As the S&P 500 clambers back from June lows toward the highest level in two months, the change in sentiment among stock investors might be a matter of “sell the rumor, buy the fact.”

“The equity market was well ahead of the curve in terms of pricing in recession risk in June and has now converged with other markets such as credit and rate markets,” said JPMorgan strategist Nikolaos Panigirtzoglou.

Only the Treasury and commodities markets are sounding higher odds of a recession. For five-year Treasuries the probability has climbed to 38% from 15%. Commodities are pricing in an 84% probability of a downturn, versus 65% in June.

The renewed optimism from markets belies consecutive quarterly slowdowns in US economic activity this year. Other key economic measures including consumer outlays and residential investment have also recently showed signs of cooling.

Read more: Junk Bond Market Is Signaling the US Will Avoid a Recession

With Federal Reserve officials resolute on taking aggressive action to douse generation-high inflation, even if it means derailing growth, strategists caution that markets are setting themselves up for big disappointment.

“I find it difficult to agree with a lower recession probability, but it is summer, event risk is low and carry is a desirable attribute,” said Peter Chatwell, head of global macro strategies trading at Mizuho International Plc. “I expect a different market psyche to