By Simon Kennedy and Zoe Schneeweiss

The world economy may be the rockiest it’s been since the financial crisis, yet there are reasons to expect the current slowdown will prove short-lived.

Bloomberg Economics, Deutsche Bank AG and Morgan Stanley are among those whose economists reckon the slide will bottom out in this quarter or next before an acceleration later in the year.

“Put the Federal Reserve pause, trade truce, and China stimulus together and we’re looking for a trough in the first quarter and very moderate pick up ahead,” said Tom Orlik, chief economist at Bloomberg Economics.

Central Banks to the Rescue

Led by the Fed, many central banks have either held back on tightening monetary policy or introduced fresh stimulus, soothing investor fears of a slowdown. Fed Chairman Jerome Powell says he and colleagues will be patient on raising interest rates again, while European Central Bank President Mario Draghi has ruled out doing so this year and unveiled a new batch of cheap loans for banks.

Elsewhere, authorities in Australia, Canada and the U.K. are among those to have adopted a wait-and-see approach. China, at its National People’s Congress this month, signaled a willingness to ease monetary and fiscal policies to support expansion. 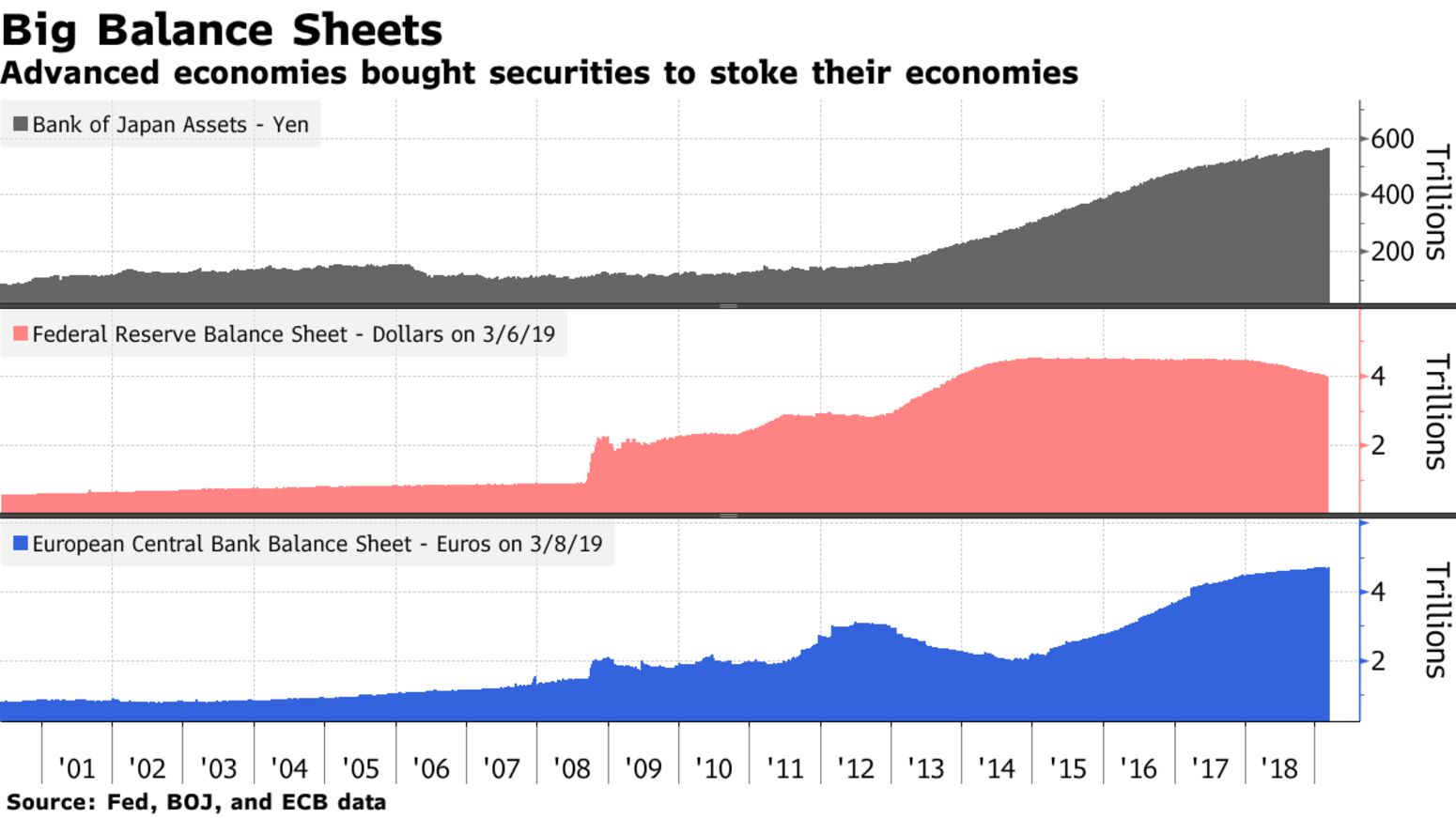 Having tightened at the end of last year, in part prompting the Fed to rethink the outlook, financial conditions have loosened up. After touching a 2 1/2-year low in December, the Bloomberg U.S. Financial Conditions Index -- which measures the overall level of financial stress in money, bond and equity markets -- has since rebounded.

Reflecting a more positive investor view, there’s also been a rebound in stocks this year. The S&P 500 has gained almost 20 percent from its December low, while the Shanghai Composite is up about 22 percent. 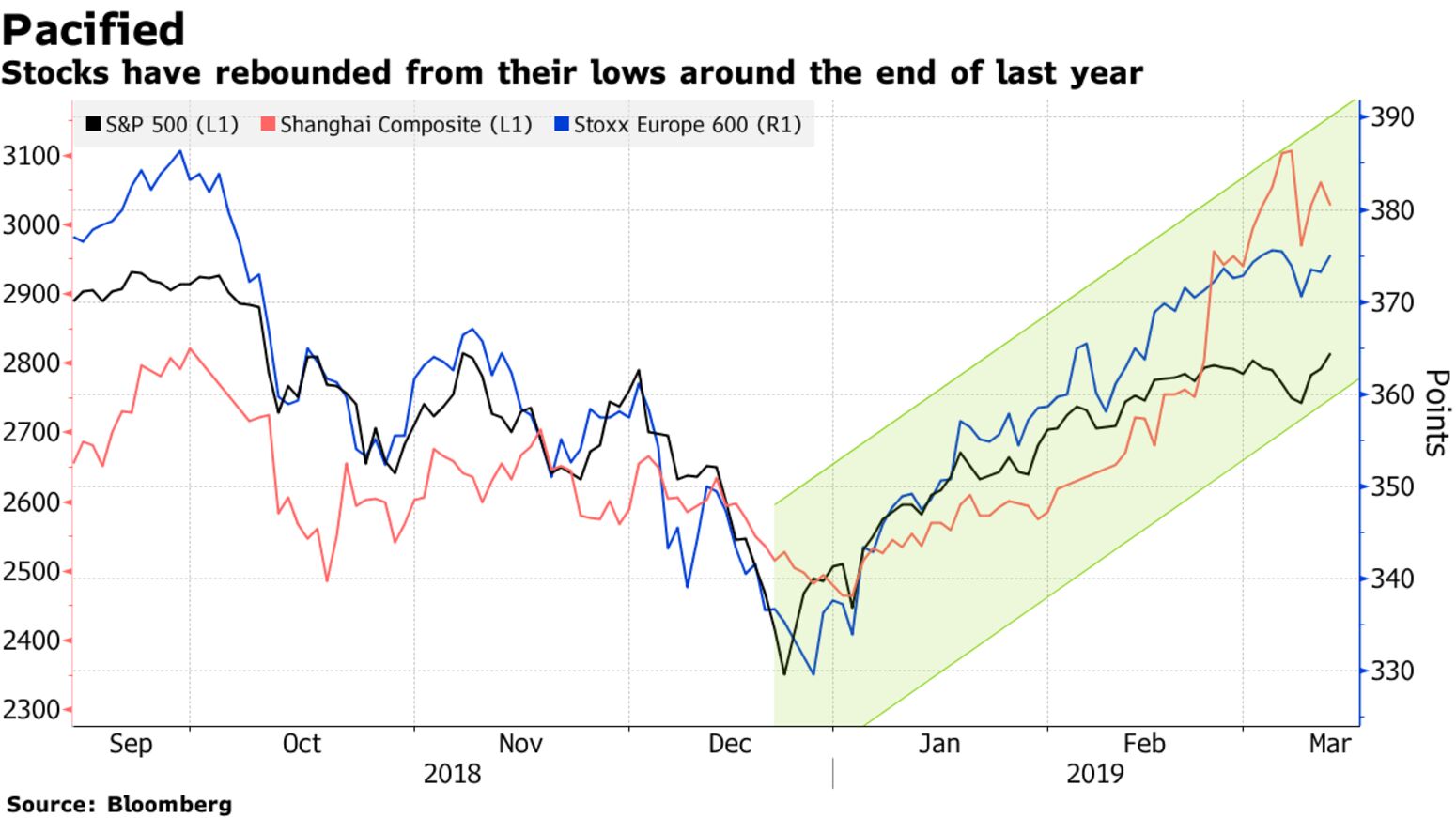 An easing in U.S. dollar strength versus 2018 has also given relief to emerging markets, taking some pressure off policy makers to guard against capital flight. Credit numbers for China and Japan in February were up strongly from a year ago.

IHS Markit’s indicator of global growth rose in February from a 28-month low and, encouragingly, there was an improvement in the gauge of demand. Its measure of worldwide services also picked up in February for the first time in three months. Citigroup’s surprise index for the euro area -- which has been one of the weak spots of the global economy -- has rebounded to its best reading in almost five months.

In China, a measure of new orders in the manufacturing Purchasing Managers Index improved last month, and Germany got good news about an increase in water levels on the River Rhine. A drop last year disrupted barge traffic, hitting industry and adding to the temporary factors that pushed the economy near a recession. 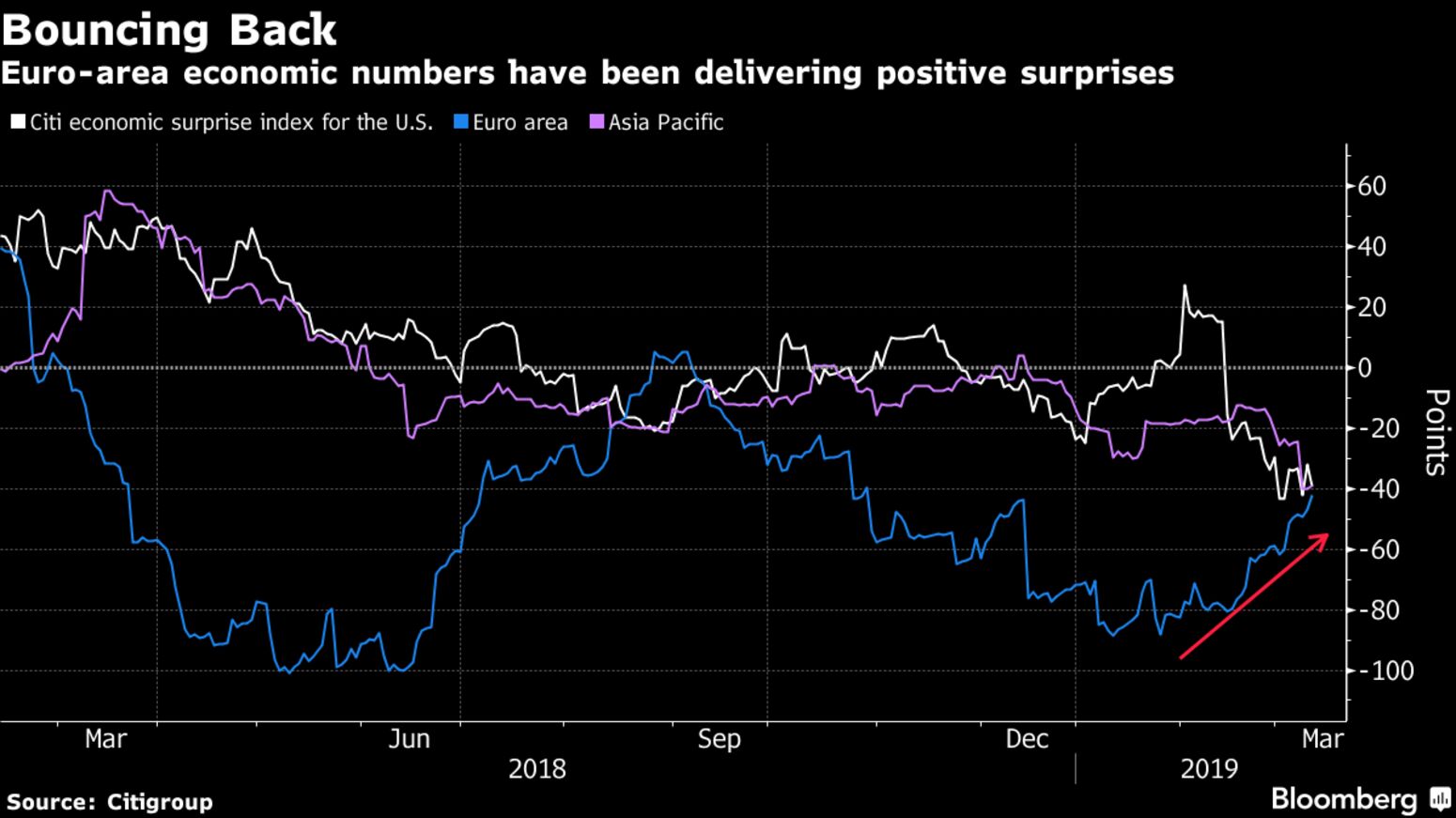 Investors have been keen to blame political discord, and especially the global trade war, for prompting businesses and consumers to retrench. One measure of unpredictability in 20 countries entered the year at a record level.

But U.S. President Donald Trump decided against imposing another round of tariffs on China on March 1 and there are signs that he and Chinese President Xi Jinping may soon be able to strike a trade deal. A model designed by the Institute of International Finance to track U.S. trade in real time showed signs of stabilizing from early this year.

“Global trade fears are overblown, as are concerns that global growth may slow significantly,” according to Robin Brooks, the IIF’s chief economist.

Risks of Recession in Next 12 Months Is Low, Says Barclays’s Hobbs

Even with February’s disappointing U.S. employment report, the global labor market continues to tighten, providing reason to hope consumers will keep spending. JPMorgan Chase & Co. estimates unemployment in developed nations is now at a 40-year low of 5 percent and set to fall further. That has the bank predicting wages will grow 3.2 percent in the final quarter of this year, the fastest for any point in the decade-long expansion and almost a percentage point faster than the same period of 2017.

The International Monetary Fund is still predicting global growth of 3.7 percent this year and 3.5 percent in 2019, a pretty good clip for this stage of the expansion. Deutsche Bank strategist Alan Ruskin also argues there is reason to be more upbeat than the headlines suggest. China’s economy, for example, is five times its size in 2000, meaning a 6 percent growth rate now is equivalent to 30 percent back then.

“When making even longer-term comparisons, absolute levels and changes become even more important than the limited perspective provided by percentage changes,” he wrote in a note to clients this week.

— With assistance by Michelle Jamrisko, Enda Curran, and Scott Lanman