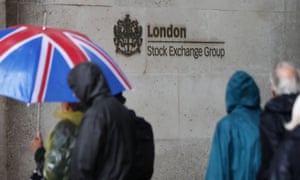 The pound has slumped to its lowest level in more than a month, as hopes fade that a Brexit deal will be struck.

With weeks left before the 31 October Brexit deadline, sterling came under selling pressure on the foreign exchanges on Tuesday, sliding to its lowest point against both the euro and the dollar since early September, after negotiations took an acrimonious turn.

In a sign of growing fears for the economy, the pound dropped by about half a cent against the single currency to trade at €1.115, while also falling by a similar amount against the US dollar, to $1.22.

John Goldie, a dealer at the currency trader Argentex, said: “The market is pricing in that risk to a greater degree again. The pound has lost ground against all the major currencies over the course of the day so far – only the Canadian dollar has performed worse in the last week.”

Sterling slid on the international money markets after a No 10 source said Angela Merkel was making a deal impossible and Brussels accused Boris Johnson of trying to play a “stupid blame game”.

Neil Wilson of the financial trading company Markets.com said: “We are now heading towards the revoke versus no deal showdown. The pound does not like the tone of all this.”

The new head of the International Monetary Fund, Kristalina Georgieva, warned squabbling nations in her maiden speech to forget their differences, telling them to prepare a united response to the most serious threat to the global economy since the financial crisis a decade ago.

City analysts believe another Brexit extension is the most likely outcome, and warned that sterling could come under intense pressure over coming weeks as the political chaos mounts.

Petr Krpata, the chief European currency strategist at the Dutch bank ING, said the pound could still fall below $1.20 against the dollar. “There is plenty of room for weakness,” he said.