Amid toxic competition, airlines embrace marriage of convenience - THE GUARDIAN

For so long they have operated in silos, with rivalry and unhealthy competition that ruined all. Now, the ‘strange bedfellows’ are learning strategic collaborations to share burden and cut avoidable losses. WOLE OYEBADE writes on enormous gains that lie in the offing.

Unhealthy rivalry actually thrives in the sector. Operators rarely cooperate. They neither do business together nor find good reasons for one. To some, “it cheapens my brand”. To others, “what does Mr. B know about the aviation business?” “I will show them that I am the biggest”. Soon, ego snowballs into trade war. Predatory or underpricing, de-marketing and route rat-race become the skill-set in the local sector.

A scenario in the sector comes to mind, when on one afternoon at one of the airports, six airplanes, different carriers, all adorned the apron, revving up the engine for the same destination. Only a hundred passengers funneled into the terminal – not even enough to fill one aircraft. But half-a-dozen are waiting.

In the spirit of “competition”, they jostled for patronage. An airline had 38. Another flew with 12. One almost had the misfortune of nothing to fill 120 available seats. Yet, it departed. They all lost on account of poor capacity utilisation and sheer operational wastage.

That picture is typical of most afternoon belts and off-peak periods. Over a week, month or year, estimated loss is colossal. And when mandatory maintenance like C-check is due in 18 months’ time, airlines begin to feel the pinch as it coughs out an average of $2 million per aircraft.

Dealing in bad hands Since the aviation sector got liberalised in the 80s, the industry has opened up to free entry and free exit of willing operators. The Nigerian Civil Aviation Regulations (Nig. CARs) also empower airlines to initiate ticket prices for sustainability.

Though a dollarised industry and highly susceptible to vagaries of foreign exchange, local airlines have consistently underpriced the sector given an undercurrent price war.

In 2016 when naira-to-dollar rate spiked by 100 per cent, the cost of aviation fuel, aircraft maintenance, and spare parts all doubled, but not air fares.

Currently, at N485/$1, an airline recently offered ticket fare at N16, 500. “It sounds good and inviting from customers’ perspective, but not for aviation business,” a Chief Executive Officer said.

The CEO, who would not want his name mentioned, observed that even at N30, 000 for a one-hour flight, the airline runs at a loss. At an average cost of N30, 000 per economy class ticket, multiplied by 120 passengers on a B737 aircraft, it gives aboutN3.6 million per flight. At least N1 million of the sum goes to fuel and another N1 million plus goes to sundry charges and taxes. So, the airline is left with about N1 million to cater for maintenance and personnel among other obligations.

“By that estimate even if you have a full capacity, which has become rare lately, there is nothing left for profit. So, I don’t understand how that airline will claim to be in business offering such a ridiculous rate. But that is what we have been seeing in this industry; a subtle attempt to de-market others, run them out of the route, and inflate the price,” he said.

A new thinking in Dana-Ibom Alliance Perhaps two airlines that will not have to “de-market” or try to outpace one another are Dana Airline and Ibom Air, owned and operated by the Akwa Ibom State government.

The Dana-Ibom Air Alliance is the first time indigenous carriers have heeded aviation experts’ advice for competing airlines to codeshare, make the most of available customers, and cut operational wastage.

The significant milestone affords Dana and Ibom a business arrangement whereby both airlines jointly offer flights to common destinations, while operating services to destinations that are not within each airline’s regular routes. By doing so, both airlines expand their market presence and competitive footprint in the interest of the flying public.

The Chief Operating Officer (COO) of Dana Air, Obi Mbanuzuo said the discussion started about a year ago. “This is the first of its kind for domestic airlines in Nigeria and a huge step in the right direction for both Dana Air and Ibom Air,” he said.

COO of Ibom Air, George Uriesi, noted that the alliance would offer increased frequencies into common destinations as well as codeshare flights into destinations each airline does not operate into, providing more options for passengers and business retention for both airlines.

“With the initiation of this business alliance, both airlines have embraced a key global best practice. At Ibom Air, our business model and unwavering commitment remains schedule reliability, on-time departures and excellent service. Hence, we are constantly on the lookout for better and more effective ways to serve our customers,”Uriesi stated.

Aero Contractors, Aero AMO and Cally Air Another landmark that is slowly, though steadily changing the narrative in the local sector, is the Aero Contractor’s metamorphosis and partnership with itself. 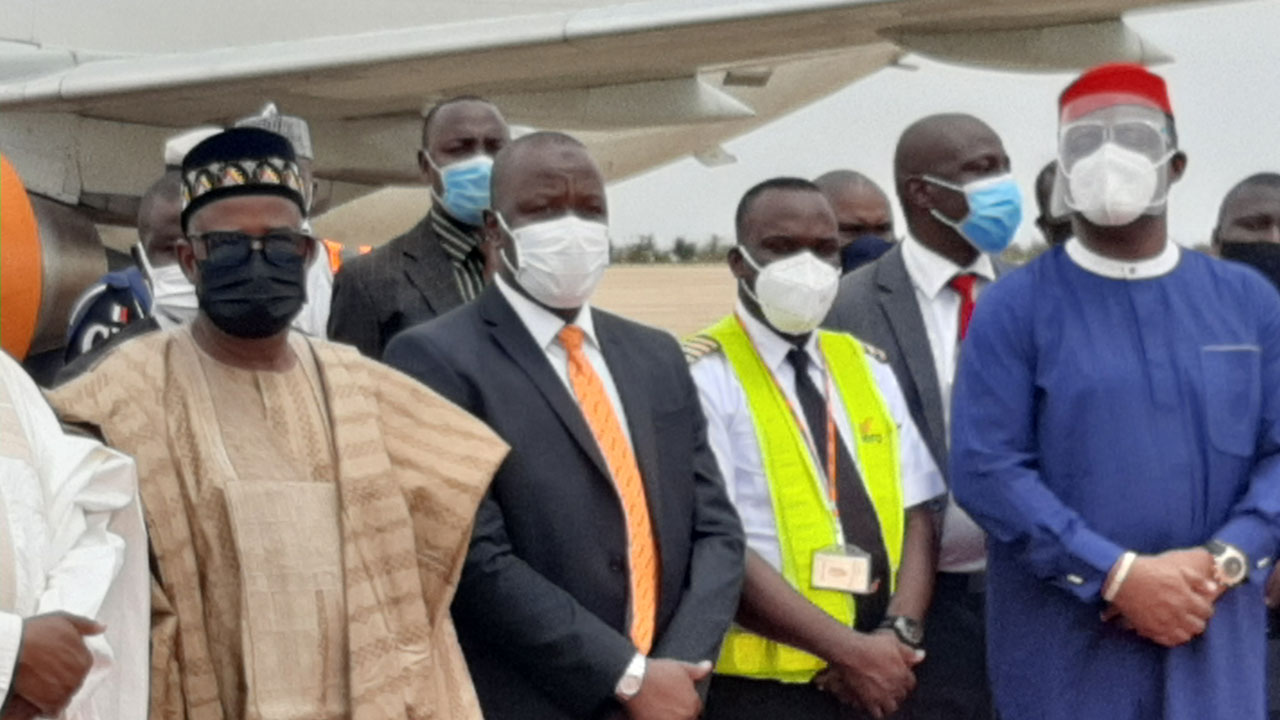 How? The oldest indigenous commercial airline had a near-fatal disaster in 2016. The Federal Government through the Asset Management Corporation of Nigeria (AMCON) took over the airline. Under receivership, the airline divested into Aircraft Maintenance Organisation (AMO) and got approval to maintain Boeing 737 Classics locally – a major win for local aviation.

The AMO began C-checks on Aero Contractor’s grounded airplanes, almost halved the huge capital flight that would have gone with overseas maintenance, and helped stabilise the air travel business arm of the company.

Managing Director of the airline, Capt. Abdullahi Mahmood, on Monday said the AMO, a separate entity, has been instrumental to Aero Contractors’ route expansion, availing fleet capacity to launch Bauchi operations with a B737-400 airplane.

Head of the AMO, James Ominiyi, said besides meeting the critical need of its parent company with five C-checks already done locally, the facility has completed seven checks for Air Peace, three for Max Air, one for Dana Air, and two ongoing for Air Peace airline.

He added that the Aero AMO has lately got the approval rating of DR Congo, Ghana Civil Aviation, with new partnerships with Tunisia, Malta and Mongolia in the offing.

“We are widening our operations to ensure that local airlines do not have to go overseas and spend heavily doing C-checks. Doing it here saves at least $50,000 that would have been spent on fueling, flight charges and crew allowances.

“We are expanding our hangar to accommodate more aircraft at a time. We have reached an agreement to set up a hangar in Abuja. We already have 45 engineers training on E145 and Q400 air planes. We will have to buy equipment and also get approvals from the NCAA. But the journey has begun,” Ominiyi said.

The Guardian learnt that Aero Contractors is also partnering with Cross Rivers’ state government to run its new airline, Cally Air. With two B737 aircraft on ground, Cally Air will benefit from Aero’s technical expertise and avoid pitfalls of startups in a sector that abhor errors.

More alliances, please! It is really not by chance that major global carriers form alliances. No modern airline, no matter how big, survives alone. Through major alliances like Oneworld, Star Alliance and SkyTeam, even the legacy carriers pool bloc resources to compete with other airlines and offer competitive bargains to customers.

President of Sabre Network in Nigeria and West African region, Gbenga Olowo, advised local operators on the need to flow with the current; form alliances or merger to emerge stronger and competitive.

Olowo said as much as the challenges of operating in the Nigerian business environment are huge, the airlines could not continue to run one-man, small but weak airlines against one another and hope to survive one day.

According to him, it makes a better business strategy to have one or two strong airlines than lots that cannot compete with other African carriers.

The Nigerian Civil Aviation Authority (NCAA) is not in the position to force alliances between A and B airlines, but benefits of cooperation among airlines that have common values are sufficient motivation. And as local aviation grows in the number of operators, more will survive with win-win partnerships than in mutually destructive rivalry.