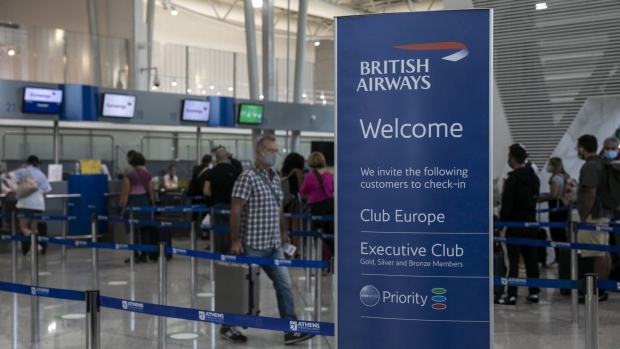 A British Airways Plc sign stands in front of travelers queuing at check-in counters at Athens International Airport, in Athens, Greece, on Thursday, Sept. 17, 2020. The U.K. government imposed a 14-day quarantine for travelers arriving from seven Greek islands, starting from Sept. 7, in a shift to its coronavirus strategy, as domestic cases of the disease continued to rise. Photographer: Yorgos Karahalis/Bloomberg , Bloomberg

(Bloomberg) -- British Airways and Ryanair Holdings Plc face an investigation into whether they broke U.K. consumer rules by failing to offer refunds to customers for flights they couldn’t take.

The U.K.’s Competition and Markets Authority said it has opened enforcement cases against both airlines on Wednesday. The watchdog last year opened a probe into the airline sector, following concerns that during the Covid-19 pandemic, customers were denied refunds while unable to fly and instead were offered vouchers or the option to rebook flights.

The refund issue caused a backlash last year when flights were grounded and customers were forced to cancel trips that they were no longer legally allowed to take. It proved contentious from the start of the pandemic when cash-starved airlines steered passengers toward rebooking or accepting credits for future flights.

“While we understand that airlines have had a tough time during the pandemic, people should not be left unfairly out of pocket for following the law,” Andrea Coscelli, chief executive officer at the CMA, said in a statement. “Customers booked these flights in good faith and were legally unable to take them due to circumstances entirely outside of their control.”

The airline companies will now have the opportunity to respond to the regulator’s concerns. British Airways said that it had issued well over 3 million refunds during the coronavirus crisis. “It is incredible that the government is seeking to punish further an industry that is on its knees,” the carrier said in a statement.

Ryanair “approached such refund requests on a case by case basis and has paid refunds in justified cases” and that since June 2020 customers have been able to rebook flights at no extra cost, the airline said in response to the probe.