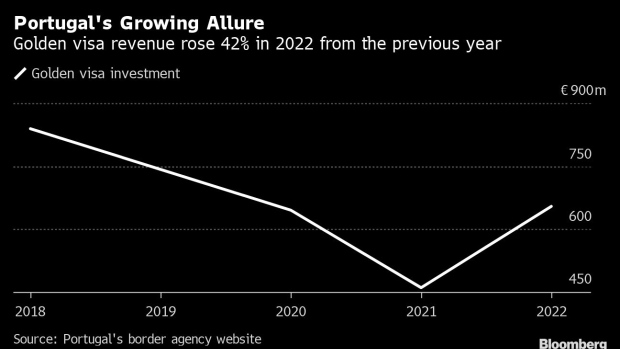 (Bloomberg) -- Home prices in Portugal had the biggest annual rise in more than three decades, defying expectations that rising interest rates would dampen demand for property in the southern European nation.

House prices increased 18.7% in 2022 from the previous year, Confidencial Imobiliario, which collects data on the property market, said in an email. While the annual gains are the biggest since 1991, Confidencial said its data also indicated that the country’s housing market was slowing down.

The rise in property prices has been caused by growing demand from foreign buyers, who have flocked to Portugal in search of a warm climate, lower costs of living and the so-called “golden visa” program, which ties residency permits to real estate purchases. These buyers are willing to pay more than twice as much as domestic buyers for a home in Lisbon, the country’s National Statistics Institute said in a report in April, exacerbating concerns over housing affordability.

Today, most Portuguese believe that their country is in the midst of a housing crisis, according to a survey by weekly newspaper Expresso. More than half of those queried want the government to roll back incentives for foreign buyers, including the golden visa program.

Investment in the program increased 42% to €654 million ($711 million) in 2022 from the previous year. According to the Portuguese Immigration and Borders Service, this came mostly from U.S. and Chinese buyers.

Still, data from Confidencial Imobiliario showed that home-price gains in Portugal slowed over a quarter-on-quarter basis toward the end of 2022. Prices rose just 3.2% in the fourth quarter, down from 3.7% in the third quarter, 5% in the second quarter and 5.5% in the first quarter of last year.

In a Jan. 11 report, S&P Global Ratings forecast that house prices in Portugal will fall 4.4% this year after rising 6.8% in 2022. That would be the biggest decline among the 11 European countries covered, and according to the ratings agency, would reflect the impact of higher interest rates in a country in which a large share of mortgages are variable rate.

In neighboring Spain, S&P predicts that home prices will drop 2.5% this year after increasing an estimated 4.1% in 2022.

To try to regulate real estate demand, in 2021 Portugal began restricting its golden visa program to property purchases outside Lisbon and the northern city of Porto. The program was launched more than a decade ago in a bid to fix Portugal’s public finances following a 2011 bailout from the European Union, and it has since raised €6.8 billion.